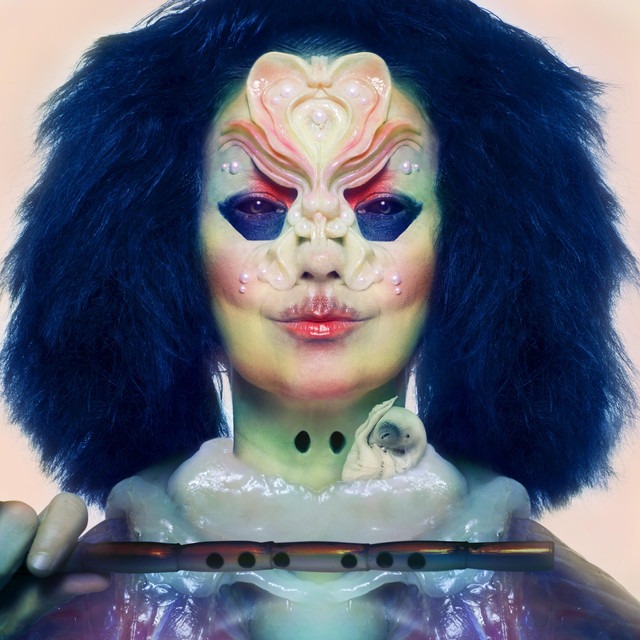 Born and raised in Reykjavík, Björk began her music career at the age of 11 and gained international recognition as the lead singer of the alternative rock band the Sugarcubes. After the band's breakup in 1992, Björk embarked on a solo career, coming to prominence with albums such as Debut (1993), Post (1995), and Homogenic (1997), while collaborating with a range of artists and exploring a variety of multimedia projects. Her other albums include Vespertine (2001), Medúlla (2004), Volta (2007), Biophilia (2011), Vulnicura (2015) and Utopia (2017).

Several of Björk's albums have reached the top 20 on the US Billboard 200 chart. As of 2015, she had sold between 20 and 40 million records worldwide. Thirty-one of her singles have reached the top 40 on pop charts around the world, with 22 top-40 hits in the UK, including the top-10 singles "It's Oh So Quiet", "Army of Me", and "Hyperballad" and the top-20 singles "Play Dead", "Big Time Sensuality", and "Violently Happy". Her accolades and awards include the Order of the Falcon, five BRIT Awards, and 15 Grammy nominations. In 2015, Time named her one of the 100 most influential people in the world. Rolling Stone named her the 60th greatest singer and the 81st greatest songwriter.

Björk starred in the 2000 Lars von Trier film Dancer in the Dark, for which she won the Best Actress Award at the 2000 Cannes Film Festival, and was nominated for the Academy Award for Best Original Song for "I've Seen It All". Biophilia was marketed as an interactive app album with its own education program. Björk has also been an advocate for environmental causes in Iceland. A retrospective exhibition dedicated to Björk was held at the New York Museum of Modern Art in 2015.

"It was a great opportunity to embody the difference that I’m looking for" The post Watch Thao cover Björk for Mental Health Awareness Week appeared first on NME.

Three events are set to take place in Brazil, Chile and Argentina later this year The post Primavera Sound to launch in South America with Arctic Monkeys, Björk, Travis Scott and Lorde appeared first on NME.

The musician stars in new viking epic 'The Northman', which arrives in cinemas next week The post Björk hopes more female directors will tackle Viking Age appeared first on NME.

Björk plays a scary seeress in ‘The Northman’ exclusive clip

The film will be released later this month The post Björk plays a scary seeress in ‘The Northman’ exclusive clip appeared first on NME.

Catching up with the in-demand studio guru, who’s worked with everyone from Björk to Big Thief, about her empathetic approach to an unnecessarily mysterious field.

She joins a host of artists, including Nick Cave and the Killers, to have scrapped Russian shows due to the invasion of Ukraine

Featuring demos, outtakes, and a quietly powerful Björk cover, this EP from the Massachusetts songwriter feels like a gentle exhale.

"I’m finishing it now" The post Björk says her new album will “probably come out in the summer” appeared first on NME.

Rosie Thomas Enlists Sufjan Stevens, the Shins, Iron & Wine for Cover of Björk’s “All Is Full of Love”: Listen

She'll team up with conductor Bjarni Frímann Bjarnason for the concerts The post Björk announces pair of orchestral shows in Miami appeared first on NME.

AD feature with Sonos The Chemical Brothers and Brian Eno have shared new instalments of their Sonos Radio HD series, which are available to listen to now. Both artists launched their own curated stations earlier this year, joining the likes of Björk, Dolly Parton, Thom Yorke, Brittany Howard and more on the platform. Iconic dance […] The post The Chemical Brothers explore early rap and Brian Eno talks visual art in new Sonos Radio HD instalments appeared first on NME.

"In this new album, there’s a lot of chill in the first half of the song, but when there’s one minute left the song turns into a club" The post Björk says new album is for people “making clubs in their living room” appeared first on NME.

35-track deluxe edition includes unreleased tracks, rarities, B-sides, demos and band's covers of Björk’s “All Is Full of Love” and The Stone Roses’ “I Wanna Be Adored"

Los Angeles fans will now get the opportunity to see the singer's theatrical concert tour The post Björk announces new ‘Cornucopia’ US tour dates for 2022 appeared first on NME.

The performance will be staged at venues in Los Angeles and San Francisco for five dates. She has also rescheduled her Björk Orchestral dates in Reykjavík.

This Country Makes It Hard To Fuck (Björk Remix)

Army of Me: Remixes and Covers

Selmasongs: Music from the Motion Picture "Dancer in the Dark"