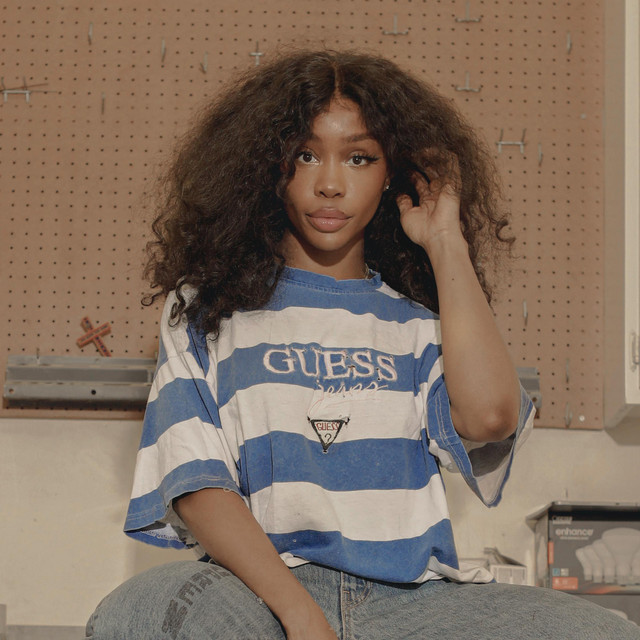 Solána Imani Rowe (born November 8, 1989), known professionally as SZA ( SIZ-ə), is an American R&B singer. Born in St. Louis, Missouri, she began making music in the early 2010s, releasing two extended plays before signing with the hip hop record label Top Dawg Entertainment, through which she released Z (2014), her third EP and first retail release. That same year, she co-wrote "Feeling Myself" by Nicki Minaj and Beyoncé. In 2016, she was featured on Rihanna's song "Consideration".

SZA's debut studio album, Ctrl (2017), was released to universal acclaim from music critics. It debuted at number three on the US Billboard 200 and was certified double platinum by the Recording Industry Association of America (RIAA). At the 60th Annual Grammy Awards, the album earned her four nominations, including Best New Artist. In 2020, it was placed on Rolling Stone's 500 Greatest Albums of All Time list. In August 2017, she was featured on Maroon 5's Top 10 hit single "What Lovers Do". The next year, she collaborated with Kendrick Lamar to create the top 10 single "All the Stars" for the Black Panther soundtrack, for which she was nominated for the Golden Globe Award and Academy Award for Best Original Song.In 2020, she released the single "Good Days"; the following year saw the release of the singles "I Hate U" and Doja Cat's "Kiss Me More", which she was featured on; all three singles reached the top 10 on the Billboard Hot 100 in 2021, with the latter breaking the record for the longest-running all-female collaboration within the top 10, and earning her the Grammy Award for Best Pop Duo/Group Performance. SZA also earned an additional top 20 hit that year, as a featured artist on Summer Walker's "No Love", which peaked at number 13.

The film has been compared to both 'Pulp Fiction' and 'High Fidelity' The post SZA to make movie debut alongside ‘Euphoria’’s Chloe Cherry in ‘Tuna Melt’ appeared first on NME.

Fresh off making his successful directorial debut with 2021's 'Boogie,' Eddie Huang has enlisted a pair of stars for his next feature film, 'Tuna Melt.'

She has a major spotlight on her as the first female rapper on the label that brought you Kendrick Lamar and SZA. She couldn't be more ready

The first night of the duo's three sold-out shows at Seattle's Climate Pledge Arena was a resounding success.

“She really ATE! This collaboration is everything I always imagined it to be" The post SZA joins Doechii for new remix of ‘Persuasive’ appeared first on NME.

It’s been five long years since Harrison Mills and Clayton Knight put out a body of work under the ODESZA masthead. The Seattle-based duo’s last LP, A Moment Apart, not only won over ODESZA listeners, but also critics, upon its release in September 2017. Their third studio album would go on to debut at No.... Read More ▸ The post ODESZA reaffirm their place in dance music’s pantheon with ‘The Last Goodbye’ appeared first on Dancing Astronaut.

The album is signature ODESZA, full of lush soundscapes, grandiose moments and productions that are equally complex and emotive.

SZA previously announced her long-awaited sophomore album would arrive sometime this summer. Punch says TDE and RCA have decided to push it back.

Each week we canvas the wide, wild world of dance music to bring you the hottest new tracks.

ODESZA give way to sixth and final album single, ‘Light Of Day’ with Ólafur Arnalds

With five out of 13 total tracks from ODESZA‘s The Last Goodbye having already been released over the past handful of months, listeners have been anxiously awaiting the exhaustive delivery of their senior album on July 22. Thankfully for the Foreign Family‘s loyal fanbase, they’ve given a sixth and final LP preview with just one... Read More ▸ The post ODESZA give way to sixth and final album single, ‘Light Of Day’ with Ólafur Arnalds appeared first on Dancing Astronaut.

Is Doja's verse the reason why it's taken hella long for fans to get this song?

The pair previously won a Grammy together for 2021's "Kiss Me More."

Travis Scott, SZA, and J. Cole were set to headline the Las Vegas festival in September

The deluxe release of the 2017 album sends it back to No. 1 for the first time in nearly five years.

More unreleased tracks from that era may yet be on the way too The post SZA shares deluxe edition of ‘Ctrl’ to celebrate fifth anniversary appeared first on NME.

"This is JUST a gift for camp ctrl," the artist shared.

The event will take place on Juneteenth weekend (June 17-19) in Washington, DC.

It features seven additional tracks, including an alternate version of “Love Galore” with Travis Scott

A total of seven unreleased songs have been added to the tracklist of the acclaimed album, which originally dropped on this exact date back in 2017.

It's the first North American festival Scott has been announced for since the fatal crowd crush tragedy at Astroworld last year The post Travis Scott, SZA and J. Cole to headline Day N Vegas 2022 appeared first on NME.

SZA and J. Cole will join Scott as headliners for the Labor Day festival.

No Love (with SZA & Cardi B) [Extended Version]

Just For Me (Space Jam: A New Legacy)

The Other Side (from Trolls World Tour) [Oliver Heldens Remix]

The Other Side (from Trolls World Tour)

Black Panther The Album Music From And Inspired By

All The Stars (with SZA)