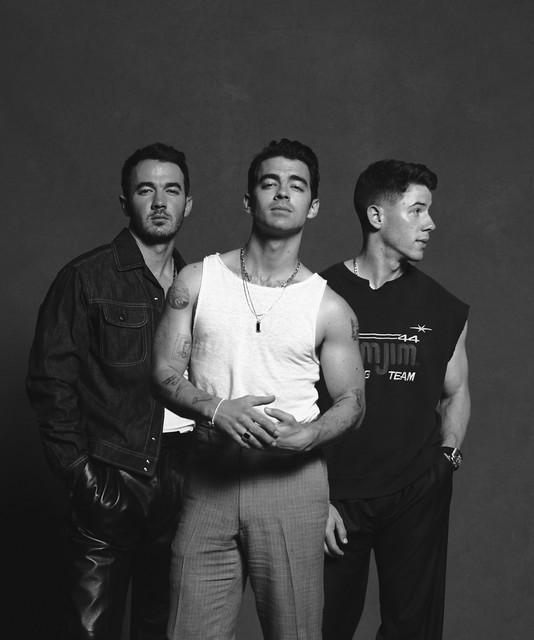 The Jonas Brothers () are an American pop rock band. Formed in 2005, they gained popularity from their appearances on the Disney Channel television network. They consist of three brothers: Kevin Jonas, Joe Jonas, and Nick Jonas. Raised in Wyckoff, New Jersey, the Jonas Brothers moved to Little Falls, New Jersey, in 2005, where they wrote their first record that made its Hollywood Records release. They starred in the 2008 Disney Channel Original Movie Camp Rock and its 2010 sequel, Camp Rock 2: The Final Jam. They also starred in their own Disney Channel series Jonas, which was rebranded as Jonas L.A. for its second season. The band have released five albums: It's About Time (2006), Jonas Brothers (2007), A Little Bit Longer (2008), Lines, Vines and Trying Times (2009), and Happiness Begins (2019).

In 2008, the group was nominated for the Best New Artist award at the 51st Grammy Awards and won the award for Breakthrough Artist at the American Music Awards. Before the release of Lines, Vines and Trying Times, they had sold over eight million albums worldwide. After a hiatus between 2010 and 2011 to pursue solo projects, the group reunited in 2012 to record a new album, which was cancelled following their break-up on October 29, 2013.

They have sold over 17 million albums worldwide as of 2013. Six years following their split, the group reunited with the release of "Sucker" on March 1, 2019. The song became the 34th song in history to debut at number one on the Billboard Hot 100, and became the Jonas Brothers' first number one single on the chart. Their fifth studio album, Happiness Begins, was released on June 7, 2019, topping the US Billboard 200.

The annual City of Hope celebration featured performances from the Jonas Brothers, Billy Porter and Jack Johnson -- and a pre-taped appearance by Taylor Swift.

Jonas Brothers ‘Had Such an Incredible Time’ With Their Vegas Residency, They’re Adding More Dates

"We're coming back to play," they shared.

We're burnin' up for these 25 tracks.

Jonas Brothers Tease New Direction for Upcoming Music: ‘The Sound That We’re Tapping Into Is Really Unique For Us’

The siblings also opened up about how marriage and fatherhood have impacted their lives.

The DNCE frontman played the song a little differently during the Jonas Brothers’ Vegas residency.

The DNCE frontman played the song a little differently during the Jonas Brothers' Vegas residency.

The band has partnered with Scriber, a subscription-based platform that offers fans exclusive access to their favorite creators starting at $4.99 a month.

"It's basically an evolution of the sound in a way I think is really natural for us and feels like a great next step," he said.

Joe Jonas Jokes About the Jonas Brothers’ Purity Rings on TikTok: ‘Literally Doing Anything in Our Teen Years’

"People are making fun of it anyway, we can make fun of it ourselves,” he once said about his old purity ring.

From Taylor Swift to Jonas Brothers, take a peek at the set list from one of the pop star’s earliest gigs.

The singer's cover arrives just days after she welcomed the siblings to her show.

Rodrigo celebrated the first few shows of her tour with a childhood photo of her performing their songs.

On Friday (April 8), countless entertainers took to their social media pages to #StandUpForUkraine and, on a wider scale, for all the world’s refugees and displaced people.

"We're ready to get it out there for the world," Joe Jonas told Kelly Clarkson of new Jonas Brothers music.

“Everything was very unfamiliar at that moment” The post Sunmi says touring with the Jonas Brothers as Wonder Girls felt “very lonely” appeared first on NME.

The siblings will head to Sin City this June for a run of five dates.

"We are extremely disappointed that we can't be there with our fans in Atlanta" The post Megan Thee Stallion and Jonas Brothers cancel Atlanta Jingle Ball performance due to crews getting COVID appeared first on NME.

"I’m extremely disappointed to let my hotties down," the rapper tweeted.

Jonas Brothers Announce 2022 Mexico Dates for Remember This Tour: ‘Get Ready to Party’

The sibling act heads south of the border in February.

'Moments Between the Moments' kicks off its first episode on Tuesday (Dec. 7).

The entertainers will debut their second Nellie's Southern Kitchen at MGM Grand in early 2022.

The "SNL" cast member is dishing it out, and it’s the Jonas Brothers who need to take it.

The Jonas Brothers' Remmeber This Tour sends their career touring earnings past $300 million from more than 4 million tickets sold.

From Megan Thee Stallion's Halloween looks to the first look at Lady Gaga in 'House of Gucci,' take a look at the "awards" Billboard gave this week's headlines.

Who's In Your Head

Leave Before You Love Me

I Need You Christmas

What A Man Gotta Do

Music from the 3D Concert Experience