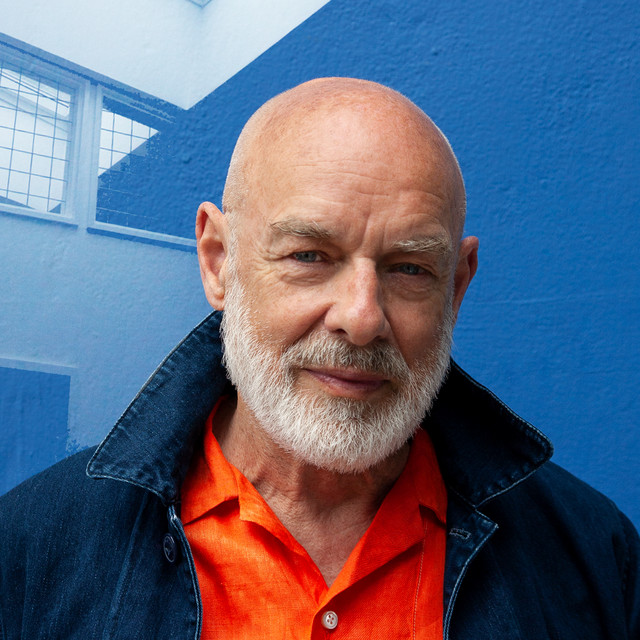 Brian Peter George St John le Baptiste de la Salle Eno (; born Brian Peter George Eno, 15 May 1948) is a British musician, composer, record producer and visual artist best known for his contributions to ambient music and work in rock, pop and electronica. A self-described "non-musician", Eno has helped introduce unconventional conceptual and recording approaches to contemporary music. He has been described as one of popular music's most influential and innovative figures.Born in Suffolk, Eno studied painting and experimental music at the art school of Ipswich Civic College in the mid 1960s, and then at Winchester School of Art. He joined glam rock group Roxy Music as its synthesiser player in 1971, recording two albums with the group before departing in 1973. Eno then released a number of solo pop albums beginning with Here Come the Warm Jets (1974) and, also in the mid-1970s, began exploring a minimalist direction on influential recordings such as Discreet Music (1975) and Ambient 1: Music for Airports (1978), coining the term "ambient music" with the latter.

Alongside his solo work, Eno collaborated frequently with other musicians in the 1970s, including Robert Fripp, Harmonia, Cluster, Harold Budd, David Bowie, David Byrne and Judy Nylon. He also established himself as a sought-after producer, working on albums by John Cale, Jon Hassell, Laraaji, Talking Heads, Ultravox, and Devo, as well as the no wave compilation No New York (1978). In subsequent decades, Eno continued to record solo albums and produce for other artists, most prominently U2 and Coldplay, alongside work with artists such as Daniel Lanois, Laurie Anderson, Grace Jones, Slowdive, Karl Hyde, James, Kevin Shields, and Damon Albarn.

Dating back to his time as a student, Eno has also worked in other media, including sound installations, film, and writing. In the mid-1970s, he co-developed Oblique Strategies, a deck of cards featuring aphorisms intended to spur creative thinking. From the 1970s onwards, Eno's installations have included the sails of the Sydney Opera House in 2009 and the Lovell Telescope at Jodrell Bank in 2016. An advocate of a range of humanitarian causes, Eno writes on a variety of subjects and is a founding member of the Long Now Foundation. In 2019, Eno was inducted into the Rock and Roll Hall of Fame as a member of Roxy Music.

Brian Eno Returns With ‘ForeverAndEverNoMore’, His First Vocal Album Since 2005

It's the first track from his new album, which arrives this October The post Brian Eno delivers climate warning on new track, ‘There Were Bells’ appeared first on NME.

A new Brian Eno documentary is in the works

You can’t make a conventional, by-the-numbers bio doc about Brian Eno The post A new Brian Eno documentary is in the works appeared first on NME.

Helvetica director Gary Hustwit has started production on the the career-spanning Eno, which will feature never-before-seen footage, unreleased music, and more

Hot Chip, the Weather Station, Nile Rodgers, and others have also provided previously unheard tracks to the EarthPercent initiative

A frequent collaborator of ambient musicians like Laraaji and his brother Brian Eno, the British composer presents a collection of wistful solo piano pieces shaded by strings.

'Future If Future' is out on April 22 The post Brian Eno discusses his Earth Day collaboration with Michael Stipe appeared first on NME.

"NFTs seem to me just a way for artists to get a little piece of the action from global capitalism" The post Brian Eno on NFTs: “Now artists can become little capitalist assholes as well” appeared first on NME.

AD feature with Sonos The Chemical Brothers and Brian Eno have shared new instalments of their Sonos Radio HD series, which are available to listen to now. Both artists launched their own curated stations earlier this year, joining the likes of Björk, Dolly Parton, Thom Yorke, Brittany Howard and more on the platform. Iconic dance […] The post The Chemical Brothers explore early rap and Brian Eno talks visual art in new Sonos Radio HD instalments appeared first on NME.

"The climate crisis is also a climate opportunity" The post Brian Eno calls for “a revolution” in music industry’s approach to climate change appeared first on NME.

The festival will take place from November 4-7 The post Hot Chip, Brian Eno and more announced for Cardiff’s Festival of Voice appeared first on NME.

The Lighthouse, a new station on Sonos Radio HD, will broadcast unheard music from Eno’s archive

Get to Know Loma, Who Make Shadowy Indie Rock That Sounds Like a Séance

In this Rising interview, frontwoman Emily Cross talks about how her work as a death doula affects her art, collaborating with Brian Eno, and the ghostly wonders of new album Don’t Shy Away.

The Weight Of History / Only Once Away My Son

Idea of Order at Kyson Point

Drums Between The Bells

Small Craft On A Milk Sea

My Life in the Bush of Ghosts

Ambient 2: The Plateaux Of Mirror (Remastered 2004)

Before And After Science

Stars Of The Lid