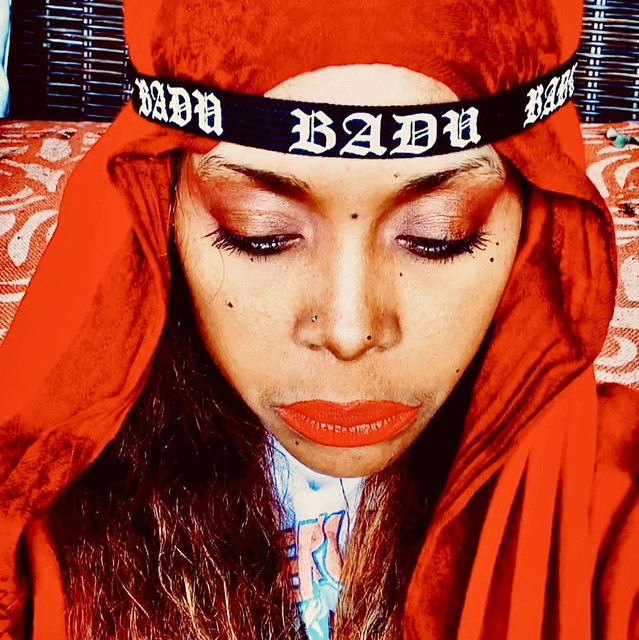 Erica Abi Wright (born February 26, 1971), known professionally as Erykah Badu (), is an American singer-songwriter, record producer and actress. Influenced by R&B, 1970s soul, and 1980s hip hop, Badu became associated with the neo soul subgenre in the 1990s and 2000s along with artists such as D'Angelo and Maxwell. She has been called the “Queen of Neo Soul”. Badu's career began after she opened a show for D'Angelo in 1994 in Fort Worth; record label executive Kedar Massenburg was highly impressed with her performance and signed her to Kedar Entertainment. Her first album, Baduizm, was released in February 1997. It spawned four singles: "On & On", "Appletree", "Next Lifetime" and "Otherside of the Game". The album was certified triple Platinum by the Recording Industry Association of America (RIAA). Her first live album, Live, was released in November 1997 and was certified double Platinum by the RIAA.Her second studio album, Mama's Gun, was released in 2000. It spawned three singles: "Bag Lady", which became her first top 10 single on the Billboard Hot 100 peaking at #6, "Didn't Cha Know?" and "Cleva". The album was certified Platinum by the RIAA. Badu's third album, Worldwide Underground, was released in 2003. It generated three singles: "Love of My Life (An Ode to Hip-Hop)", "Danger" and "Back in the Day (Puff)" with 'Love' becoming her second song to reach the top 10 of the Billboard Hot 100, peaking at #9. The album was certified Gold by the RIAA. Badu's fourth album, New Amerykah Part One, was released in 2008. It spawned two singles: "Honey" and "Soldier". New Amerykah Part Two was released in 2010 and fared well both critically and commercially. It contained the album's lead single "Window Seat", which led to controversy.

Badu's voice has been compared to jazz singer Billie Holiday. Early in her career, Badu was recognizable for her eccentric style, which often included wearing very large and colorful headwraps. She was a core member of the Soulquarians. As an actress, she has played a number of supporting roles in movies including Blues Brothers 2000, The Cider House Rules and House of D. She also has appeared in the documentaries Before the Music Dies and The Black Power Mixtape 1967-1975.

Megan Thee Stallion took to IG to share a video of Erykah Badu twerking during her set at Switzerland’s Gurtenfestival, calling it "real mf TEXAS SH*T."

Syd on Erykah Badu: “She Makes What She Needs to Make”

Erykah Badu has been one of Syd's biggest influences from childhood. When they finally met, "It was amazing"

In this exclusive excerpt from hip-hop historian Dan Charnas' excellent new book, Dilla Time, we get the inside story of how iconic beatmaker J Dilla and an elite group of musicians, including D'Angelo, Erykah Badu, and Questlove, changed the shape of rap and R&B forever

"We know that your life was not in vain" The post Erykah Badu pays emotional tribute to George Floyd to mark his 48th birthday appeared first on NME.

A gallery highlighting the best of this year’s fest including Erykah Badu, Phoebe Bridgers, Animal Collective, and more

A gallery highlighting the best of this year’s fest including Erykah Badu, Phoebe Bridgers, Animal Collective, and more

Each Sunday, Pitchfork takes an in-depth look at a significant album from the past, and any record not in our archives is eligible. Today we revisit Erykah Badu’s 1997 debut, an existential anchor of the neo-soul movement.

The star had shared photos from the bash, which prompted critics to dub it a "superspreader" event The post Erykah Badu apologises for being “terrible guest” at Barack Obama’s 60th birthday party appeared first on NME.

Released as part of their ode to musical legends series #GHETTOGODS The post EarthGang pay homage to Erykah Badu in new single appeared first on NME.

But You Caint Use My Phone (Mixtape)