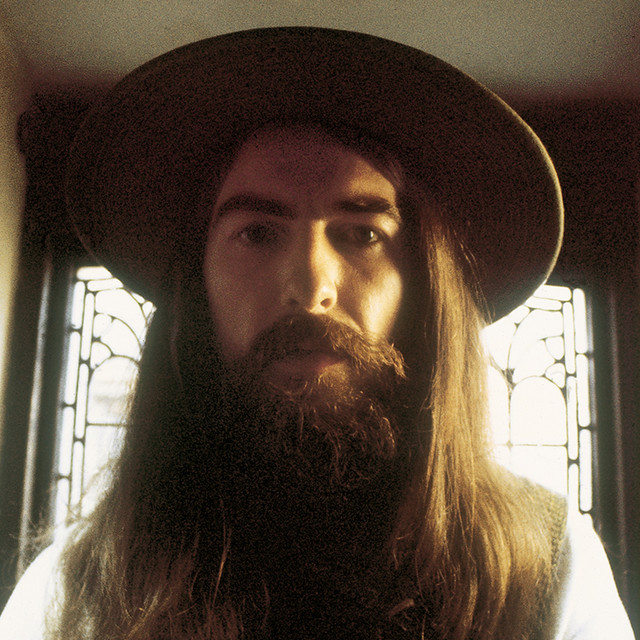 George Harrison (25 February 1943 – 29 November 2001) was an English musician and singer-songwriter who achieved international fame as the lead guitarist of the Beatles. Sometimes called "the quiet Beatle", Harrison embraced Indian culture and helped broaden the scope of popular music through his incorporation of Indian instrumentation and Hindu-aligned spirituality in the Beatles' work. Although the majority of the band's songs were written by John Lennon and Paul McCartney, most Beatles albums from 1965 onwards contained at least two Harrison compositions. His songs for the group include "Taxman", "Within You Without You", "While My Guitar Gently Weeps", "Here Comes the Sun" and "Something".

Harrison's earliest musical influences included George Formby and Django Reinhardt; Carl Perkins, Chet Atkins and Chuck Berry were subsequent influences. By 1965, he had begun to lead the Beatles into folk rock through his interest in Bob Dylan and the Byrds, and towards Indian classical music through his use of Indian instruments, such as sitar, on numerous Beatles songs, starting with "Norwegian Wood (This Bird Has Flown)". Having initiated the band's embracing of Transcendental Meditation in 1967, he subsequently developed an association with the Hare Krishna movement. After the band's break-up in 1970, Harrison released the triple album All Things Must Pass, a critically acclaimed work that produced his most successful hit single, "My Sweet Lord", and introduced his signature sound as a solo artist, the slide guitar. He also organised the 1971 Concert for Bangladesh with Indian musician Ravi Shankar, a precursor to later benefit concerts such as Live Aid. In his role as a music and film producer, Harrison produced acts signed to the Beatles' Apple record label before founding Dark Horse Records in 1974 and co-founding HandMade Films in 1978.

Harrison released several best-selling singles and albums as a solo performer. In 1988, he co-founded the platinum-selling supergroup the Traveling Wilburys. A prolific recording artist, he was featured as a guest guitarist on tracks by Badfinger, Ronnie Wood and Billy Preston, and collaborated on songs and music with Dylan, Eric Clapton, Ringo Starr and Tom Petty, among others. Rolling Stone magazine ranked him number 11 in their list of the "100 Greatest Guitarists of All Time". He is a two-time Rock and Roll Hall of Fame inductee – as a member of the Beatles in 1988, and posthumously for his solo career in 2004.Harrison's first marriage, to model Pattie Boyd in 1966, ended in divorce in 1977. The following year he married Olivia Arias, with whom he had a son, Dhani. Harrison died from lung cancer in 2001 at the age of 58, two years after surviving a knife attack by an intruder at his Friar Park home. His remains were cremated, and the ashes were scattered according to Hindu tradition in a private ceremony in the Ganges and Yamuna rivers in India. He left an estate of almost £100 million.

Alongside 50 years in Yes, Hall of Famer also played on George Harrison's 'All Things Must Pass' and Lennon's "Imagine" and "Instant Karma"

The Rolling Stone writer, star of a new Netflix doc, reminisces in our new podcast about interviewing everyone from Ray Charles to George Harrison

"We said we’d come back, and we got back,” McCartney told the crowd at his first show since the pandemic hit

The collection marks the 20th anniversary of the Beatle’s death

The introduction to the book has been written by Martin Scorsese The post George Harrison’s widow Olivia writes poetry book dedicated to late Beatle appeared first on NME.

"Strum a guitar in the same room that George, Paul, and John sat and rehearsed during the early years" The post Beatles fan turns George Harrison’s childhood home into AirBnB appeared first on NME.

The likes of Ringo Starr, Mark Hamill, Rosanna Arquette and Taika Waititi are among the all-star cast enlisted to celebrate the song's 50th anniversary The post Famous names from the world of entertainment honour George Harrison in ‘My Sweet Lord’ video appeared first on NME.

George Harrison’s “My Sweet Lord” Gets New Video With Dozens of Stars: Watch

Denis O’Brien, who served as George Harrison’s manager for much of the former Beatle’s solo career and with Harrison co-founded the production company that backed such hits as the classic Monty Python’s Life of Brian, has died at age 80. O’Brien’s daughter, Kristen O’Brien, told The Associated Press that Denis O’Brien died Dec. 3 in […]

“I miss my friend so much” The post Paul McCartney and Ringo Starr pay tribute to George Harrison on 20th anniversary of late Beatle’s death appeared first on NME.

George Harrison's childhood home in Liverpool where he rehearsed with Paul McCartney and John Lennon as teens is up for auction.

George Harrison’s childhood home in Liverpool goes up for auction

25 Upton Green, where Harrison learned to play the guitar, will be sold for an estimated £160,000-£200,000 The post George Harrison’s childhood home in Liverpool goes up for auction appeared first on NME.

It's taken from new album 'The Willie Nelson Family' which arrives in November The post Listen to Willie Nelson’s cover of George Harrison’s ‘All Things Must Pass’ appeared first on NME.

Lukas Nelson sings on track from new album 'The Willie Nelson Family,' which will be released Nov. 19

"I also knew that it was somehow good" The post James Taylor says “arrogance of youth” helped him audition in front of Paul McCartney and George Harrison appeared first on NME.

Accounts belonging to George Harrison and John Lennon got uncannily chatty while celebrating the 50th anniversary of Imagine — is this the future of dead celebrity discourse?

Billie Eilish’s ‘Happier Than Ever’ Steady at No. 1 on Billboard’s Top Album Sales Chart

Billie Eilish’s "Happier Than Ever" is steady at No. 1 for a second week on Billboard’s Top Album Sales chart, while George Harrison, Barbra Streisand, Nas, BTS and Chris Young debut in the top 10.

George Harrison’s former No. 1 album 'All Things Must Pass' returns to the top 10 on the Billboard 200 chart for the first time since 1971, following its 50th anniversary reissue on Aug. 6.

Living In The Material World (Remastered)

All Things Must Pass (Remastered 2014)