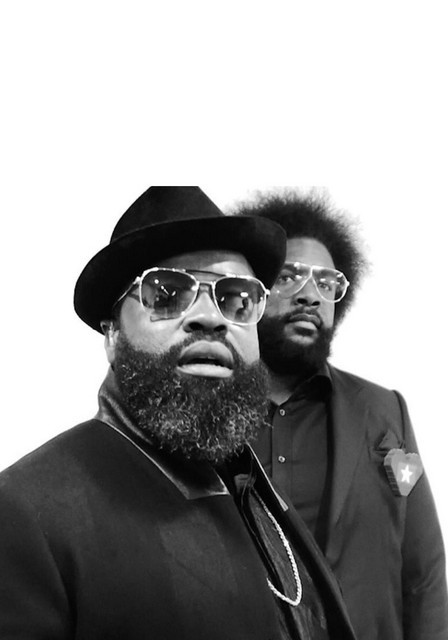 The Roots are an American hip hop band formed in 1987 by Tariq "Black Thought" Trotter and Ahmir "Questlove" Thompson in Philadelphia, Pennsylvania, United States. The Roots serve as the house band on NBC's The Tonight Show Starring Jimmy Fallon, having served in the same role on Late Night with Jimmy Fallon from 2009 to 2014.

The Roots are known for a jazzy and eclectic approach to hip hop featuring live musical instruments and the group's work has consistently been met with critical acclaim. ThoughtCo ranked the band #7 on its list of the 25 Best Hip-Hop Groups of All-Time, calling them "Hip-hop's first legitimate band."In addition to the band's music, several members of the Roots are involved in side projects, including record production, acting, and regularly serving as guests on other musicians' albums and live shows.

The climate change-minded festival was set to include performances by Haim, Sheryl Crow, The Roots and more.

The Roots, HAIM, and Sheryl Crow were set to headline the climate advocacy event in mid-September

Black Thought of The Roots and Danger Mouse have shared their collaborative album 'Cheat Codes,' which features ASAP Rocky, MF Doom, and Run The Jewels.

The Roots rapper and super producer deliver lush beats and bring on some high-end guests. But Black Thought's genius sometimes gets a little buried in the mix

Madonna made the comment while appearing on 'The Tonight Show', where she also performed 'Music' on toy instruments with The Roots and Jimmy Fallon The post Madonna says she’d love to collaborate with Kendrick Lamar: “His new record is history-making” appeared first on NME.

The queen of pop and the prince of late-night TV came together Wednesday (Aug. 10) to give the gift of “Music”– performed on classroom instruments. Night owls scored a special rendition of “Music,” the title track from Madonna’s 2000 album, which she performed with Jimmy Fallon and his Tonight Show house band The Roots. In […]

Other acts slated to play The Big Climate Thing Festival include Khruangbin, The Weather Station and Courtney Barnett The post Haim, The Roots, The Flaming Lips, Sheryl Crow and more to play climate-themed music festival in New York appeared first on NME.

The Roots, Haim, and Sheryl Crow Announced for The Big Climate Thing Festival

The New York festival also features climate talks and performances from the Flaming Lips, the Weather Station, Khruangbin, and more

The best photos from backstage, in the crowd, and onstage at a joyful evening of culture and history in Hollywood

Haim, Julieta Venegas, The Roots, and Band of Horses are among those on the new lineup

Watch Pusha T perform ‘Dreamin Of The Past’ with The Roots

The song appears on T's new album 'It’s Almost Dry' The post Watch Pusha T perform ‘Dreamin Of The Past’ with The Roots appeared first on NME.

Pusha T Links Up With The Roots for ‘Dreamin of the Past’ Performance on ‘Tonight Show’: Watch

With his closing remarks, Pusha, also known as King Push, was seemingly manifesting a Grammy win for his work.

The Roots frontman explained why he didn't know what happened until after he took the stage to accept his best documentary award.

Michelle Obama Congratulates Questlove on ‘Summer of Soul’ Oscar Win: ‘Barack and I Were So Moved’

The Roots drummer told 'Tonight Show' boss Jimmy Fallon on Monday night that he was meditating until the moment before he won.

The Roots legend was overcome with emotion during his speech.

The Roots, Mitski, the National to Headline Pitchfork Music Festival 2022

Mitski, The National & The Roots to Headline 2022 Pitchfork Festival

Tickets on sale March 11 for Chicago fest taking place July 15-17, headlined by The National, Mitski, and The Roots

Kamasi Washington, Mickey Guyton, Serpentwithfeet, and others are also on the bill for the Philadelphia festival

The Hollywood Bowl announces performances by Diana Ross, Billie Eilish & The Roots for its 100th season.

The Roots Picnic is set to kick off at Philadelphia's Mann Center at Fairmount Park on June 4 and 5.

The Roots drummer is recognized for his directorial debut Summer of Soul (...Or, When the Revolution Could Not Be Televised)

Formerly the Playboy Jazz Festival, the two-day fest will take place late July at the Hollywood Bowl in Los Angeles.

Black Thought: My Life in 20 Songs

Leonard ‘Hub’ Hubbard, Longtime Bassist for The Roots, Dies at 62

Leonard "Hub" Hubbard, the former longtime bassist for The Roots, died after a long battle with cancer on Dec. 16 at the age of 62.

Feel It (You Got It)

...and then you shoot your cousin

How I Got Over

We Got You (Extended Version) / You Got Me (Drum & Bass Mix)

From The Ground Up