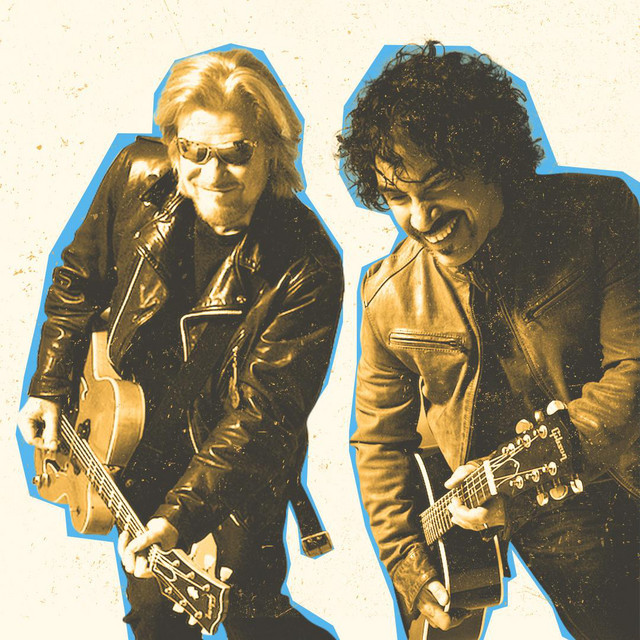 Daryl Hall and John Oates (commonly known as Hall & Oates) are an American pop rock duo formed in Philadelphia in 1970. Daryl Hall is generally the lead vocalist; John Oates primarily plays electric guitar and provides backing vocals. The two write most of the songs they perform, separately or in collaboration. They achieved their greatest fame from the mid-1970s to the late-1980s with a fusion of rock and roll and rhythm and blues.Though they are commonly referred to as Hall & Oates, Hall has been adamant about the duo being called Daryl Hall & John Oates – its official name. They have been credited on albums as Daryl Hall & John Oates (or Daryl Hall John Oates) on all of their US releases. The duo reached the US Top 40 with 29 of their 33 singles charting on Billboard's Hot 100 between 1974 and 1991. Six of these peaked at number one: "Rich Girl" (1977), "Kiss on My List" (1980), the two 1981 releases "Private Eyes", and "I Can't Go for That (No Can Do)" (also a Hot Soul No. 1), "Maneater" (1982) and "Out of Touch" (1984). Their overall 16 US Top Tens also include "She's Gone", "Sara Smile", "You Make My Dreams", "Family Man", "Say It Isn't So", and "Method of Modern Love". Seven of their albums have been RIAA-certified platinum and six of them gold. In the United Kingdom, they have achieved success with two Top Ten albums and six Top 40 singles, two of which – "I Can't Go for That (No Can Do)" and "Maneater" – reached the Top Ten. The duo have spent 120 weeks in the UK Top 75 albums chart and 84 weeks in the UK Top 75 singles chart.While employing a wide variety of session musicians on their recordings, they did have a long working relationship with several musicians who appeared on many of their works and have toured with them. They include guitarist G.E. Smith, bassist Tom "T-Bone" Wolk, and multi-instrumentalist Charles DeChant. In addition, they collaborated with sisters Sara Allen and Janna Allen on songwriting and composing.

In 2003, Hall & Oates were inducted into the Songwriters Hall of Fame. In August 2018, in a 60th-anniversary celebration of Billboard's Hot 100, the duo ranked 18 in a list of the top Hot 100 artists of all time and six in a list of the Hot 100's top duos/groups. They remain the most successful duo of all time, ahead of the Carpenters, the Everly Brothers, and Simon & Garfunkel. In September 2010, VH1 placed the duo at no. 99 in their list of the 100 greatest artists of all time. In April 2014, they were inducted into the Rock and Roll Hall of Fame, and on September 2, 2016, they received a star on the Hollywood Walk of Fame.

Daryl Hall & John Oates, Brandi Carlile, Dierks Bentley, Wilco, Lukas Nelson & Promise of the Real, and Shooter Jennings honoring the music of his father, Waylon Jennings, round out the list of headliners.

Dry in the Sun

Hold on to Yourself

I Can't Go for That (No Can Do) [Nicolaas Remix]

Philly Forget Me Not (with Train)

Live at The Troubadour

Our Kind of Soul

Do It for Love

Everything Your Heart Desires EP (Remixes)

Live at the Apollo

Along The Red Ledge

Beauty On a Back Street

Bigger Than Both Of Us