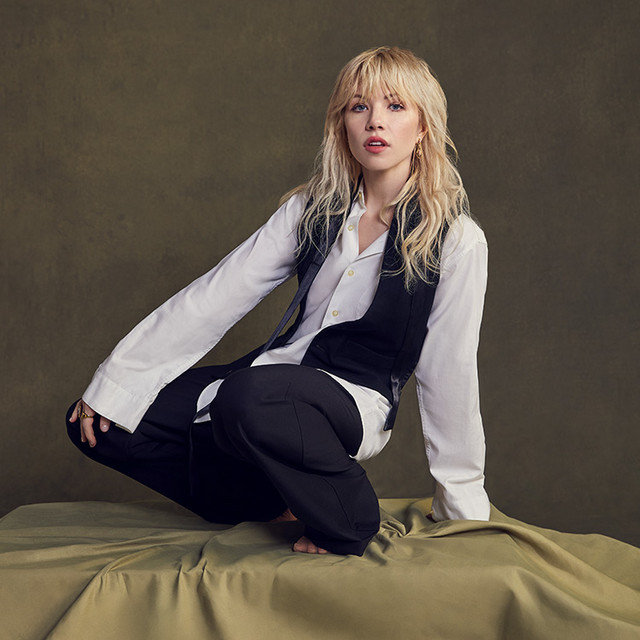 Carly Rae Jepsen (born November 21, 1985) is a Canadian singer, songwriter, and actress. Born and raised in Mission, British Columbia, Jepsen performed several lead roles in her high school's musical productions and pursued musical theatre at the Canadian College of Performing Arts in Victoria, British Columbia. After completing her studies, she relocated to Vancouver and later competed on the fifth season of Canadian Idol in 2007, placing third. In 2008, Jepsen released her folk-influenced debut studio album, Tug of War, in Canada.

Jepsen's breakthrough came in 2012, when her single "Call Me Maybe" achieved significant mainstream popularity; the song was the best-selling single of that year, reaching number one in 18 countries. As a result, she was signed to a joint worldwide record deal with School Boy Records and Interscope Records. Jepsen's second studio album, Kiss, was released later that year. It marked a greater shift into mainstream pop music and saw fair commercial success, reaching the top ten in Canada and the United States. In 2014, Jepsen made her Broadway stage debut as the titular character in Cinderella. The following year, she released her third studio album, Emotion. It is noted for its influence from 1980s music as well as blending dance-pop and synth-pop with indie sensibilities. While less commercially successful than Kiss, it saw the success of its lead single, "I Really Like You", and received critical acclaim. In 2016 Jepsen performed in the television special Grease: Live and lent her voice to the animated film Ballerina. Her fourth studio album, Dedicated, was released on May 17, 2019, along with a follow-up titled Dedicated Side B was distributed a year later.

BTS, Benny Blanco, and Snoop Dogg join forces for a new track, Calvin Harris finally gives vol. 2, Carly Rae Jepsen drops a song ahead of her new album, Eminem is back with ‘Curtain Call 2’ and more.

"I'm quite fascinated by loneliness. It can be really beautiful when you turn it over and look at it" The post Carly Rae Jepsen unveils details of new album, ‘The Loneliest Time’ appeared first on NME.

The project will mark the pop star's sixth studio album to date.

With her loneliness excursion coming to an end, Jepsen is back to share what she’s found

“Lewis has really been the silver lining of my last two years when touring wasn’t possible,” said Jepsen

A host of artists joined the Bleachers man on stage to perform a host of classics released in his birth year of 1984 The post Jack Antonoff hosts ’80s SuperJam at Bonnaroo with Carly Rae Jepsen, Japanese Breakfast and more appeared first on NME.

After three years, "the SO NICE tour is coming to your city" The post Carly Rae Jepsen announces dates for 2022 North American tour appeared first on NME.

Empress Of will support Jepsen on the So Nice Tour

She performed the Rostam-produced single at Coachella last month

Jepsen took the stage in Indio, California for the first time since 2018

Carly Rae Jepsen reflects on ten years of ‘Call Me Maybe’: “it was like a lightning bolt to my little life”

"You have opened my world and my heart with this adventure of a song and I could not be more grateful to you all" The post Carly Rae Jepsen reflects on ten years of ‘Call Me Maybe’: “it was like a lightning bolt to my little life” appeared first on NME.

Below, Utica shares an exclusive playlist with Billboard, ranging from underrated bangers from Carly Rae Jepsen to arthouse tracks from Novo Amor. Check out which songs Utica picked below

It's Not Christmas Till Somebody Cries

ok on your own

The Sound (Live In Lapland, Finland)

Party For One (Remixes)

Cut To The Feeling

Run Away With Me (Remixes Part Two)

Run Away With Me (Remixes)

Tonight I’m Getting Over You

Part of Your World

Tonight I’m Getting Over You (Remix)