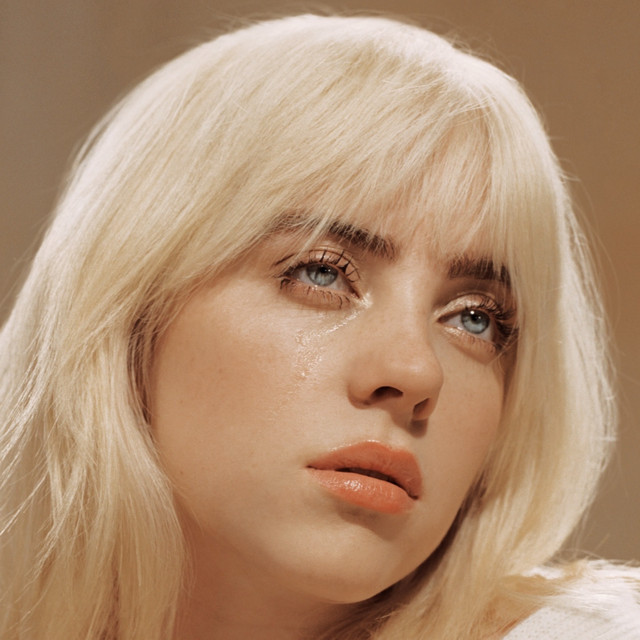 Billie Eilish Pirate Baird O'Connell ( EYE-lish; born December 18, 2001) is an American singer-songwriter. She first gained public attention in 2015 with her debut single "Ocean Eyes", which was subsequently released by Darkroom, an imprint of Interscope Records. It was written and produced by her brother, Finneas O'Connell, with whom she collaborates on music and live shows. Her commercially successful debut EP Don't Smile at Me (2017) charted in the top 15 in numerous countries, including the US, UK, Canada, and Australia.

Eilish's first studio album, When We All Fall Asleep, Where Do We Go? (2019), debuted atop the US Billboard 200 and UK Albums Chart. It was one of the best-selling albums of 2019, buoyed by the success of its fifth single, "Bad Guy", Eilish's first number-one on the US Billboard Hot 100. The following year, she co-wrote and performed the theme song "No Time to Die" for the James Bond film of the same name, which topped the UK Singles Chart and won the Academy Award for Best Original Song in 2022. Her subsequent singles "Everything I Wanted", "My Future", "Therefore I Am", and "Your Power" peaked in the top 10 in the US and UK. Her second studio album, Happier Than Ever (2021), reached number one in 25 countries.

Eilish has received multiple accolades, including seven Grammy Awards, two American Music Awards, two Guinness World Records, three MTV Video Music Awards, three Brit Awards, a Golden Globe Award and an Academy Award. She is the youngest artist in Grammy history to win all four general field categories—Best New Artist, Record of the Year, Song of the Year, and Album of the Year—in the same year. She was featured on Time magazine's inaugural Time 100 Next list in 2019 and the Time 100 in 2021. According to the Recording Industry Association of America (RIAA) and Billboard, Eilish is the 26th-highest-certified digital singles artist and one of the most successful artists of the 2010s.

Plus: MAG tallies an eighth week at No. 1 on Hot 100 Producers, while Kate Bush spends a fourth week atop Hot 100 Songwriters chart.

Eilish marked the one-year anniversary of the release of 'Happier Than Ever' with a surprise performance at Amoeba Music in Hollywood The post Watch Billie Eilish play intimate acoustic set at record store appeared first on NME.

"It's been the most amazing year," the 20-year-old singer told the audience during her performance at the celebrated record store

Eilish stopped by the independent record store to celebrate the anniversary of her sophomore album and debut her new song "TV."

Billie Eilish Confesses the Recording Studio Gives Her Anxiety: ‘I Don’t Enjoy It’

"There's other artists there – you bump into them, you look stupid" The post Billie Eilish doesn’t like working in recording studios: “It truly gives me social anxiety” appeared first on NME.

The pop star happily grooved to her 2019 hit "Bad Guy," while Finneas sat near by looking rather amused

The singer surprise-released two new songs — “TV” and “The 30th.

Billie Eilish Surprise-Releases 2 New Tracks: ‘These Songs Mean So So Much to Me’

"These songs mean so so much to me," she shared on Instagram.

The singer also said she's "going to hopefully make another album in the next year" The post Billie Eilish drops ‘Guitar Songs’ with two surprise tracks ‘TV’ and ‘The 30th’ appeared first on NME.

Billie Eilish returns to the studio with brother Finneas

Earlier this year Eilish said that she hopes to release a new album in 2023 The post Billie Eilish returns to the studio with brother Finneas appeared first on NME.

"Not showing up is not an option" The post Billie Eilish calls on fans to vote in the US midterm elections appeared first on NME.

Billie Eilish Wants Fans to ‘Use Their Voice’ During Midterm Elections, Partners With HeadCount

"Not showing up is not an option," says the singer

Fans who check their voter registration status on HeadCount.org will get the opportunity to enter to win a VIP trip to see Eilish perform live in Australia and New Zealand.

Previous celebrities honored with the title include Billie Eilish, Lizzo and Anderson .Paak.

The singer also recalled in a new interview his ordeal being held at gunpoint The post Wayne Coyne says he wants Billie Eilish to cover The Flaming Lips appeared first on NME.

Ukraine: Answering the Call is an hour-long event that aims to raise awareness and funds for those whose lives have been impacted by the ongoing crisis in Ukraine.

The talk-show host also hinted at difficulties she's having in recording her next full-length album.

Happier Than Ever (Edit)

ilomilo (Live From The Film - Billie Eilish: The World’s A Little Blurry)

Lo Vas A Olvidar (with ROSALÍA)

No Time To Die

WHEN WE ALL FALL ASLEEP, WHERE DO WE GO?

WHEN I WAS OLDER (Music Inspired By The Film ROMA)

come out and play

dont smile at me

Six Feet Under (The Remixes)