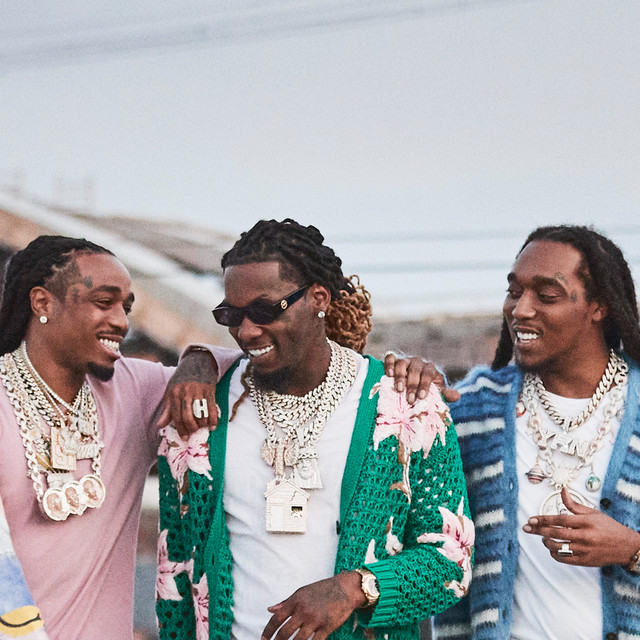 The Migos () are an American hip hop group from Lawrenceville, Georgia, founded in 2008. The group was originally composed of Southern rappers Quavo, Takeoff, and Offset. Quavo is from Athens, Georgia and Offset and Takeoff were born and raised in Lawrenceville, Georgia. They are managed by Coach K, the former manager of Gucci Mane and Jeezy, and frequently collaborated with producers such as DJ Durel, Murda Beatz, Zaytoven, and Buddah Bless. Recognized for their contribution to trap music in the 2010s, Billboard stated that the group "influenced pop culture and the entire English language by bringing their North Atlanta roots to the mainstream".Migos released their commercial debut single "Versace" in 2013, taken from their mixtape Y.R.N. (Young Rich Niggas). They released several more singles, including "Fight Night" (2014), "Look at My Dab" (2015), and their four Billboard Hot 100 top 10 entries "Bad and Boujee" (featuring Lil Uzi Vert) (2016), peaking at number 1, "MotorSport" (with Nicki Minaj and Cardi B) (2017), peaking at number 1, "Stir Fry" (2018), peaking at number 8, and "Walk It Talk It" (featuring Drake) (2018), peaking at number 1.

Migos released their debut album Yung Rich Nation in July 2015, through Quality Control Music and 300 Entertainment. In 2016, the group portrayed fictionalized versions of themselves in the first season of the Donald Glover comedy-drama television series Atlanta. Their second album, Culture, was released in January 2017 also through both record labels, and debuted atop the US Billboard 200 chart. The group signed a deal with Motown and Capitol Records in February 2017, and put out the album Culture II in January 2018, giving the group their second number 1 album in the United States. In 2021, the trio released their long-awaited fourth album Culture III, the final installment in their Culture trilogy.

On November 1, 2022, Takeoff was shot and killed in Houston, Texas.

Cardi B Recalls the Moment She and Offset Learned of Takeoff’s Death: ‘I Was So Scared’

"Tragic loss for all of us and, you know, a dark cloud over this business that we love so much," he added of the unexpected death of the Migos rapper

On his 'Table for One' show, Drake said "it’s tough to even talk about...I don’t have the words" while paying tribute to the slain Migos member.

The hip-hop world has been in mourning for the 28-year-old Migos rapper, who was fatally shot at a bowling alley in Houston early on Tuesday The post Medical examiner’s office says Takeoff died from gunshot wounds to head and torso appeared first on NME.

"Senseless violence and a stray bullet has taken another life from this world and we are devastated", Quality Control Music said The post Migos’ label share statement on Takeoff’s death as police appeal for witnesses to come forward appeared first on NME.

"Senseless violence and a stray bullet has taken another life from this world," the statement from the label reads.

The Atlanta rapper and youngest member of the Migos was fatally shot in the early hours of November 1 at a bowling alley in Houston. Here, we remember Takeoff’s

He was “the quiet” member of the Atlanta rap group, but his demeanor belied a commanding presence

The Atlanta rap group, who shaped an entire chapter and sound of hip-hop, collected multiple top 10s and collaborated with the likes of Drake, Katy Perry, Post Malone and more.

Members of the hip-hop community and beyond took to social media to pay tribute to Takeoff, after the Migos rapper was shot dead in Houston on Tuesday.

Takeoff Always Believed in Migos’ Success: ‘I Knew I Was Going To Be Here’

In Migos' first 'Rolling Stone' profile in 2015, the late rapper showed how serious he was about music

End of an Era: The Downfall of Rap Groups

Migos splitting up marks the end of a long era of rap groups ruling hip-hop. We take a look back at their dominance and decline in the genre.

Lil Baby Responds to Speculation That He Has Issues With Migos

Fresh off the release of his new album 'It's Only Me,' Lil Baby stopped by 97.9 Jamz and addressed recent rumors that he has beef with Migos.

Migos is Still a Group — But so are Quavo and Takeoff

We talked to the duo about their latest album, trap music, and a potential Migos documentary

Ahead of their debut album as Unc & Phew, 'Only Built For Infinity Links,' Quavo and Takeoff discuss their rap group Mt. Rushmore, a future Migos doc, and more.

Quavo and Takeoff gave a new interview about the future of Migos without their former bandmate Offset.

Quavo and Takeoff tease future of Migos without Offset

"Sometimes, when shit don’t work out, it ain’t meant to be" The post Quavo and Takeoff tease future of Migos without Offset appeared first on NME.

Quavo & Takeoff Cryptically Tease the Future of Migos Without Offset: ‘Only Time Will Tell’

Takeoff and Quavo Open Up About Future of Migos

In a new interview, Takeoff and Quavo—whose new album as a duo is set to drop later this week—were asked about the future of Migos and potential new music.

Next month, Migos' Quavo and Takeoff are set to roll out their debut collaborative album 'Only Built For Infinity Links,' which spans 18 tracks.

In an appearance on Yung Miami’s 'Caresha Please' interview series, Saweetie has opened up about her breakup with Migos rapper Quavo last year.

The album title is a reference to Raekwon’s 1995 solo work 'Only Built 4 Cuban Linx' The post Migos’ Quavo and Takeoff announce album ‘Only Built For Infinity Links’ appeared first on NME.

The single arrives after the duo said “the chemistry is the same” without Migos rapper Offset by their side.

We Set The Trends

Danger (with Migos & Marshmello) [From Bright: The Album]

Hands on It (feat. Migos, Sage the Gemini & Sayyi)

Look At My Dab

Get It Up - Single