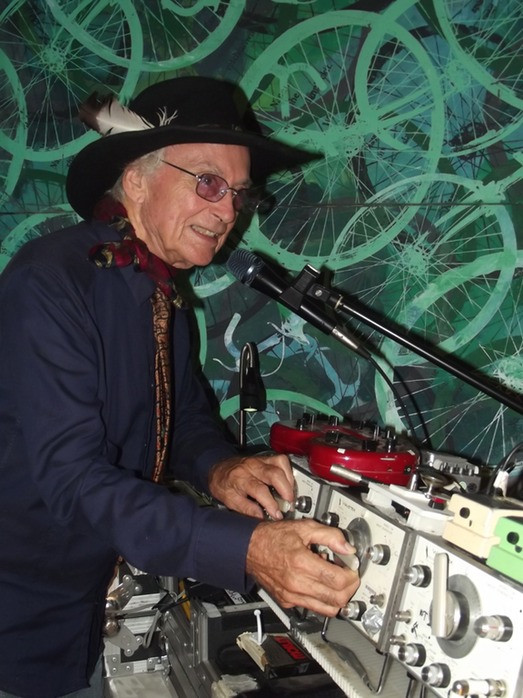 Silver Apples were an American electronic rock group from New York, active between 1967 and 1970, before reforming in the mid-1990s. It was composed of Simeon (born Simeon Oliver Coxe III, June 4, 1938 – September 8, 2020), who performed on a primitive synthesizer of his own devising; and, until his death in 2005, drummer Danny Taylor. The duo were among the first to employ electronic music techniques outside of academia, applying them to 1960s rock and pop styles.As part of New York's underground music scene, the band released two albums—Silver Apples (1968) and Contact (1969)—to poor sales. They began recording a third album before a lawsuit by Pan Am, owing to the use of their logo in the artwork of Contact, forced the end of the group and its label Kapp in 1970. In the 1990s, German bootleg recordings of the band's albums raised their profile, and Simeon reformed the group with other musicians and released new music. In 1998, he reconnected with Taylor, and the two completed their original third LP The Garden (1998). After Taylor's death, Simeon continued releasing Silver Apples projects using samples of Taylor's drumming.The band's pulsing rhythms and electronic melodies would predate several contemporary artists, including White Noise and Can, as well as later artists including Suicide, Stereolab, and Laika. AllMusic's Jason Ankeny called them "a surreal, almost unprecedented duo," while Portishead's Geoff Barrow stated that "for people like us, they are the perfect band [...] They should definitely be up there with the pioneers of electronic music."

Clinging to a Dream

The Edge of Wonder (Live)

A Lake of Teardrops

The Edge Of Wonder