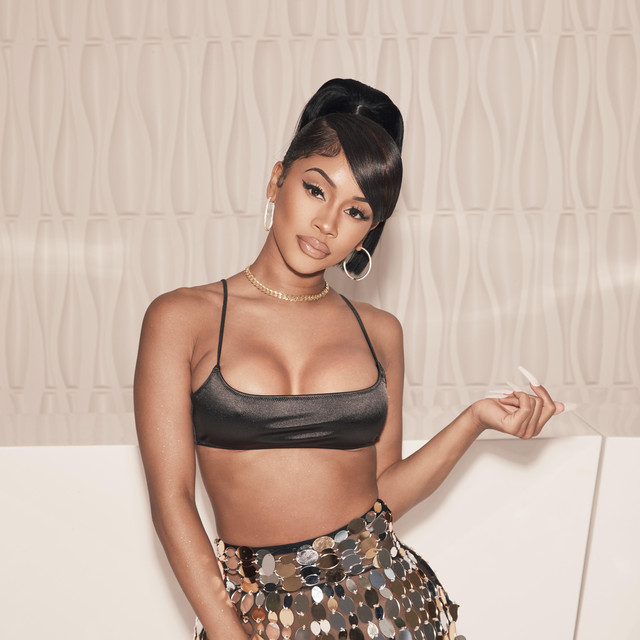 Diamonté Quiava Valentin Harper (born July 2, 1993), known professionally as Saweetie (), is an American rapper. After the release of her debut single "Icy Grl" in 2018, she was signed to her then-manager Max Gousse's record label Artistry Worldwide, a subsidiary of Warner Records.

Saweetie released her debut extended play, High Maintenance, in 2018. Her second EP, Icy, was released in March 2019 and spawned the top 40 single "My Type". Her debut album, Pretty Bitch Music, is scheduled to be released in 2022 and was preceded by the singles "Tap In" and "Best Friend" (featuring Doja Cat), both of which reached the top 20 on the Billboard Hot 100. In 2021, she received two nominations for the 64th Annual Grammy Awards including one for Best New Artist.

"It's baking and it will definitely be worth the taste," Saweetie said of the album

Saweetie Addresses ‘Pretty B*tch Music’ Delay in Note to Fans: ‘We Not Rushing Art, We Taking Our Time’

Saweetie opens up about what she's learned over the past few years and how that growth has informed her creative process in a note to her "Icy Family."

That’s My Type! Saweetie Teams With Crocs for Her Own Collection of ‘Icy’ Jibbitz Charms

Feeling icy? Here’s how fans can enter for a chance to win the limited-edition Jibbitz charms.

Saweetie has once again partnered with Crocs for the new Icy Jibbitz collection, which includes designs like snowflakes, butterflies, and more.

The arrival of “Baby Boo” comes not long after it was announced that the singer entered a partnership with Def Jam via her own label, Supergiant Records.

Some Portuguese phrases left the "ICY GRL" rapper both grossed out and amused.

The "About Damn Time" singer said her food combinations are "f---ing disgusting" in comparison to Saweetie's.

In an interview with Power 106 Los Angeles, the "About Damn Time" artist answered whether she would face off against Saweetie in a hypothetical “food Verzuz.”

Anitta brings Brazil to the desert.

The long-awaited return of Coachella after three years away will also feature a number of adjacent events and pop-ups furthering the experience.

She was nominated alongside Japanese Breakfast, Saweetie, Baby Keem, Arooj Aftab, Finneas, and others

The Watch the Throne duo takes the gong ahead of DMX, Saweetie, Baby Keem, and J. Cole

The 28-year-old rapper makes history as the first-ever global cultural consultant for the apparel company.

Olivia Rodrigo is named Woman of the Year, Karol G breaks all the rules and Saweetie brings down the house. We’ve got the most memorable moments from Billboard’s Women in Music 2022. Plus, Kanye West buries Pete Davidson neck deep and Normani is teasing new music. This is Billboard News for Thursday, March 3.

Which Was Your Favorite Billboard Women in Music Performance? Vote!

From Saweetie and Doja Cat to Bonnie Raitt, which was your favorite Billboard Women in Music performance?

Phoebe Bridgers on Taylor Swift Collab: “I Didn’t Want to Jinx It” | Women in Music 2022

Billboard’s Trailblazer Phoebe Bridgers Saweetie spoke with Chelsea Briggs on the red carpet of Women in Music 2022 about being honored, having Taylor Swift in her corner and how their collab came to be.

Billboard’s Game Changer Saweetie spoke with Chelsea Briggs on the red carpet of Women in Music 2022 all about her massive year, how her music “changed the game” and filming her documentary about her debut album.

Saweetie Performs a Sublime ‘Closer’ at 2022 Women in Music

Saweetie on Cher: ‘What I Love Is That She Doesn’t Give a F–k!’

Saweetie on singing 'Believe' as a toddler, getting fashion inspiration, and meeting one of her all-time heroes

"Closer" follows the rulers of "Tap In" and "Fast (Motion)."

She's redefining what it means to build a brand — and says her album will be out “definitely before the summer.”

Attitude (from the "Bruised" Soundtrack)

Get It Girl (from Insecure: Music From The HBO Original Series, Season 5)

Back to the Streets (feat. Jhené Aiko)

Sway With Me (with GALXARA)

My Type (The Remixes)

Up Now (feat. G-Eazy and Rich The Kid)