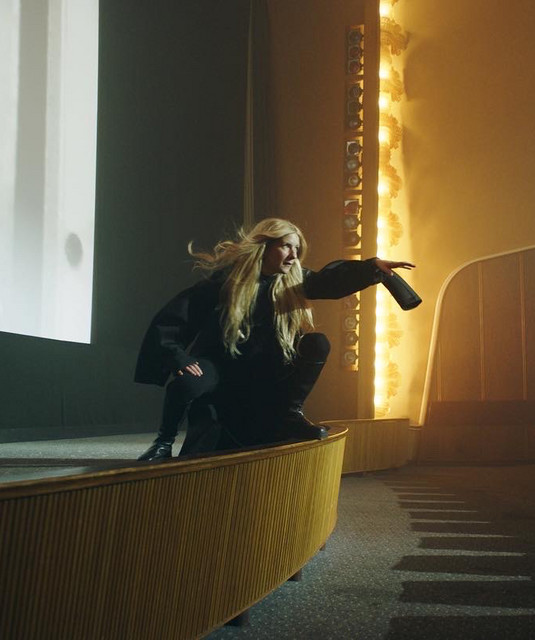 iamamiwhoami ( eye-am-am-eye-HOO-am-eye) is the electronic music and audiovisual project of Swedish singer-songwriter Jonna Lee in collaboration with her longtime record producer Claes Björklund. The project has since 2009 released audiovisual series on their YouTube channel followed by a large international audience. Visual collaborators of the project include Swedish director Robin Kempe-Bergman, until 2013, and visual collective Wave, consisting of Lee and cinematographer John Strandh, and formerly Agustín Moreaux.

Their videos in particular have spread virally, and the project is notable not only for its artistic multimedia output, but also the creators' leveraging of YouTube and viral videos to disseminate their music and the accompanying videos, garnering a cult following. In 2010, Lee founded a record label for iamamiwhoami, To whom it may concern., which she runs. One of their videos called "y" is listed at the first place of Google search under the search results for the letter "y", which generated more than 50 million views already, since it is the first link Google would get you to if the web browser does not autocomplete "youtube" properly. This slowly became a viral internet meme.

Since December 2009, iamamiwhoami's music videos have been released in several series on the project's YouTube channel, while their music is available through digital music retailers. By May 2013, a total of 24 videos had been released on iamamiwhoami's YouTube channel. Running from an initial set of prelude videos to a series of full-length songs, the videos and songs form a continuous story featuring Lee as a protagonist. iamamiwhoami released their debut physical album, the audiovisual album Kin, in June 2012, while the initial full-length series, Bounty (2010–2011), was released physically in June 2013. A third album, Blue, was released in November 2014.

The project has also remixed songs for Moby and The Irrepressibles, as well as performing live in concert tours revolving around the releases of Kin, Bounty and Blue. An online performance art "concert" in support of the Bounty series was streamed online in 2010, taking place in a forest. On 29 April 2015, a second online performance art "concert" in support of the Blue series was streamed online; this "concert" was released physically and digitally in September 2015 as Concert in Blue, and includes the first new iamamiwhoami song ("The Deadlock") since 2014.

In March 2017, Lee embarked on solo career as ionnalee, stating that it is continuation of iamamiwhoami, though "the two projects will not exist simultaneously".

In March 2022, Lee announced a new audiovisual album from iamamiwhoami, Be Here Soon, which was released on 3 June 2022.

Don't Wait For Me

down by the lake (KRONOLOGI version)