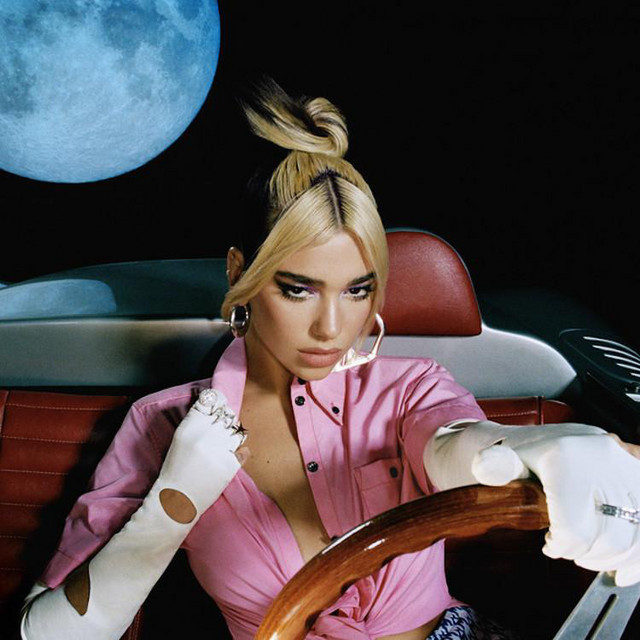 After working as a model, she signed with Warner Bros. Records in 2014 and released her eponymous debut album in 2017. The album peaked at number three on the UK Albums Chart and yielded eight singles, including "Be the One", "IDGAF", and the UK number-one single "New Rules", which also peaked at number six in the US. The album has been certified platinum in numerous countries worldwide and won Lipa the Brit Awards for British Female Solo Artist and British Breakthrough Act in 2018.

Her 2018 single "One Kiss" peaked at number one in the UK and became the year's longest-running number-one single by a female artist, winning the 2019 Brit Award for Song of the Year. In 2019, she won the Grammy Award for Best New Artist, as well as the Grammy Award for Best Dance Recording for her Silk City collaboration "Electricity". Later that year, Lipa released "Don't Start Now" as the lead single from her second studio album, Future Nostalgia (2020). Reaching number two in the UK and US, and number four on the US year-end chart, it was the most commercially successful song by a female artist in the US in 2020. Its follow-up singles "Physical", "Break My Heart", and "Levitating" also charted in the top ten, with the lattermost reaching number one on the US year-end chart in 2021.

Future Nostalgia received critical acclaim and earned six Grammy nominations—including Album of the Year, Record of the Year and Song of the Year—and became her first UK number-one album. The album helped Lipa win British Female Solo Artist and British Album of the Year at the 2021 Brit Awards. She was included on the Time 100 Next list in 2021.

SG Lewis Is Predicting the Future of Pop

The DJ/producer-turned-artist, who has worked with Dua Lipa and Tove Lo, talks about his new album and why he thinks we're due for a trance moment in pop

The honor recognizes positive representation of European culture through an artist’s music.

"They're hilarious, they're pure and they're professional," she said of her Only Murders in the Building castmates.

Plus smashes by LeAnn Rimes, Dua Lipa, The Weeknd and more.

“I need all of the sides to feel like a complete person,” the Algerian-French singer, who toured with Dua Lipa, says of her multi-layered concept album

Shawn Mendes and Rosalía are the other co-chairs of the fund-raising drive, which aims to raise $3 million to $5 million.

"I stand with the women of Iran" The post Dua Lipa shares support for women in Iran following protests appeared first on NME.

Amid rumors that she was dating Trevor Noah of the 'Daily Show'​​​​​​​ after they pictured together in NYC, Dua Lipa has clarified her relationship status.

Katy Perry Knew Dua Lipa Was the ‘It Girl’ Early On

Perry expressed empathizing with the then-rising star because of her own experience as a woman in the industry.

Katy Perry Talks ‘Kampy’ Residency, New Music, and How She Knew Dua Lipa Was the ‘It Girl’

"There's definitely going to be a lot of joy the next time I sit down and make a record," says the pop legend as she teases who she thinks will be the next "it girl"

Here's the full list of Jingle Ball tour dates and the star-studded lineup.

"Guess one kiss is all it takes," one fan tweeted.

Musicians are posting photos and videos drawing attention to the struggle for women's rights in Iran, including the death of Mahsa Amini in police custody.

"We're taking more than two steps forward and one step back – we're taking 10 steps backwards and holding on for dear life" The post Dua Lipa and Monica Lewinsky discuss women’s rights on ‘At Your Service’ podcast appeared first on NME.

The episode will drop on Friday.

Singer previously revealed that the record was “50 per cent done”  The post Dua Lipa says she feels more in “control” on her forthcoming third album appeared first on NME.

Miley Cyrus Sued For Posting Paparazzi Photo of Herself to Instagram

Dua Lipa, Justin Bieber, Ariana Grande and Katy Perry have all faced similar cases over Instagram posts of ... themselves.

Also in this week's legal recap: a dispute over "Purple Rain" energy drinks, additional allegations of unpaid bills against Triller and more.

Lipa's lawyers claim she had no prior exposure to the two songs named in the lawsuit The post Dua Lipa’s lawyers move for ‘Levitating’ copyright infringement lawsuit to be dismissed appeared first on NME.

The 76-year-old pop icon's response sparked conversation online about comparing younger artists to older ones who are still active The post Cher reacts to Dua Lipa being called “the Cher of our generation” appeared first on NME.

The pop star's legal team is firing back at one of the copyright cases she's facing over her smash hit single.

Premiere: Mafro Sets Out His Mission To Live Without Regret On Colourful Club Cut “Alright”

Until recently, he’d been largely working behind the scenes, collaborating with people like Sean Paul and Dua Lipa, but now he steps into the spotlight.

British artists such as Sam Fender, Wolf Alice, Arlo Parks and Dua Lipa have all benefitted The post Investment into artists by UK record labels has doubled in last five years appeared first on NME.

Dua Lipa Is Now an Honorary Ambassador of Kosovo

"It’s an honor and a privilege to be able to represent my country all over the world," singer says prior to her Sunny Hill Festival in Kosovo

Dua Lipa has been named an Honorary Ambassador of Kosovo

"It's an honour and a privilege to be able to represent my country all over the world," Lipa said The post Dua Lipa has been named an Honorary Ambassador of Kosovo appeared first on NME.

CAN THEY HEAR US (From ‘Gully’ with original Daniel Heath Score)

One Kiss (with Dua Lipa) [Remixes]

One Kiss (with Dua Lipa)

Lost in Your Light (feat. Miguel)

Scared to Be Lonely (Acoustic Version)

Scared To Be Lonely Remixes Vol. 2

Scared To Be Lonely Remixes Vol. 1

Be the One (Netsky Remix)

Scared to Be Lonely

Be the One (Remixes)