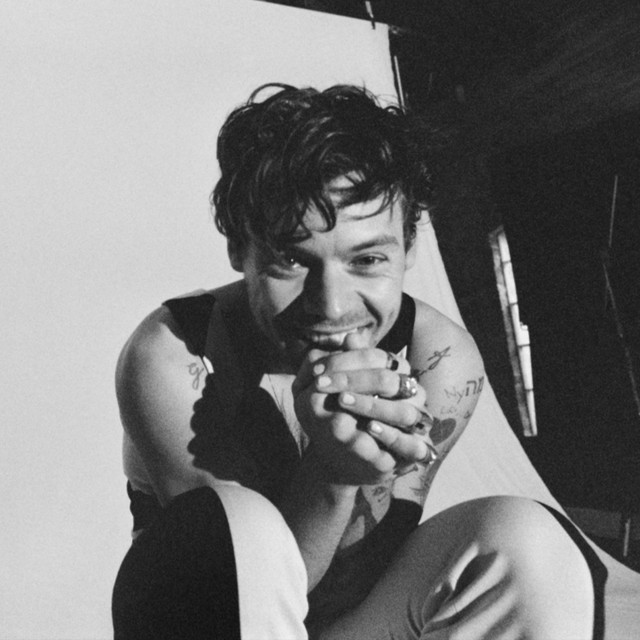 Harry Edward Styles (born 1 February 1994) is an English singer, songwriter, and actor. His musical career began in 2010 as a solo contestant on the British music competition series The X Factor. Following his elimination, he was brought back to join the boy band One Direction, who went on to become one of the best-selling boy bands of all time before going on an indefinite hiatus in 2016.

Styles released his self-titled debut solo album through Columbia Records in 2017. It debuted at number one in the UK and the US and was one of the world's top-ten best-selling albums of the year, while its lead single, "Sign of the Times", topped the UK Singles Chart. Styles' second album, Fine Line (2019), debuted atop the US Billboard 200 with the biggest ever first-week sales by an English male artist, and was the most recent album to be included in Rolling Stone's "500 Greatest Albums of All Time" in 2020. Its fourth single, "Watermelon Sugar", topped the US Billboard Hot 100. Featuring the chart-topping single "As It Was", Styles' third album, Harry's House (2022), was widely acclaimed and broke several records.

Styles has received several accolades, including two Brit Awards, a Grammy Award, an Ivor Novello Award, and an American Music Award. Styles made his acting debut in Christopher Nolan's 2017 war film Dunkirk. Aside from music and acting, he is known for his flamboyant fashion. He is the first man to appear solo on the cover of Vogue.

As Florence Pugh explained in a newly released interview, the widely anticipated film from Olivia Wilde is "bigger and better" than such talk.

Wet Leg on hearing Harry Styles’ “beautiful” cover of ‘Wet Dream’: “It felt like we were in a parallel universe”

"I really wish we could hear his rendition of all of our songs" The post Wet Leg on hearing Harry Styles’ “beautiful” cover of ‘Wet Dream’: “It felt like we were in a parallel universe” appeared first on NME.

"I just thought there’s something … special about him," the music mogul said he thought when Styles first auditioned.

"I just think it's such a beautiful song" The post Listen to Cassyette’s stripped-back cover of Harry Styles’ ‘As It Was’ appeared first on NME.

The surprise engagement came midway through Styles' show in Lisbon The post Watch Harry Styles help one of his concert-goers propose to their girlfriend appeared first on NME.

Before proposing, the concertgoer serenaded his now-fiancee with Elvis Presley’s “Can’t Help Falling in Love."

“Sign of the Times” was released to introduce the former One Direction singer’s self-titled debut album.

The U.K. talent show shared some previously-unreleased footage in which Styles sang "Hey, Soul Sister," before his a capella rendition of Stevie Wonder's "Isn't She Lovely"

Who Should Harry Styles Duet With Next? Vote!

Let us know who you think should perform a duet with Harry Styles by voting in our poll.

The band opened for 17 of the pop star's European Love on Tour shows.

Wolf Alice opened for Styles on all 17 dates of the Euro trek The post Harry Styles brings out Wolf Alice’s Ellie Rowsell on last day of European tour appeared first on NME.

It was Styles' a capella rendition of Stevie Wonder's "Isn't She Lovely" that made it to air back in 2010, but he actually first brought a Train song to the stage.

Lizzo gets a special gift from Harry Styles for her hit song ‘About Damn Time’ reaching No.1 on our Hot 100 chart, Ed Sheeran breaks a Spotify record and more!

Lizzo Smells the Roses & Pops Champagne While Celebrating Going to No.1 On the Hot 100 | Billboard News

On Tuesday (July 26), the singer showed off a massive, colorful bouquet of flower sent to her by fellow pop star Harry Styles in celebration of her Billboard Hot 100 No. 1 single “About Damn Time.”

The gift was a celebration of her "About Damn Time" single hitting No. 1.

Harry Styles, Taylor Swift & More: Who Should Win the 2022 MTV VMA for Video of the Year? Vote!

Fans can start casting their votes for the ceremony today.

This Summer, Barack Obama Is Listening to Beyoncé, Bad Bunny, and… Fatboy Slim?

The former US President spoke of how music "really can bring us all together" The post Barack Obama shares summer 2022 playlist including Wet Leg, Burna Boy, Harry Styles and more appeared first on NME.

The DJ/producer paired the pop star's "As It Was" with "Ain't No Fun," a track off his collaborative album with Wiz Khlaifa, Smoke DZA, and Big K.R.I.T.

The annual awards ceremony will name the winner on Sept. 8.

The Marvel Studios boss says the adventures of Eros – who Styles played in a post-credits scene in last year's 'Eternals' – is "something that is very exciting for us" The post Kevin Feige teases Harry Styles’ return to Marvel as Eros appeared first on NME.