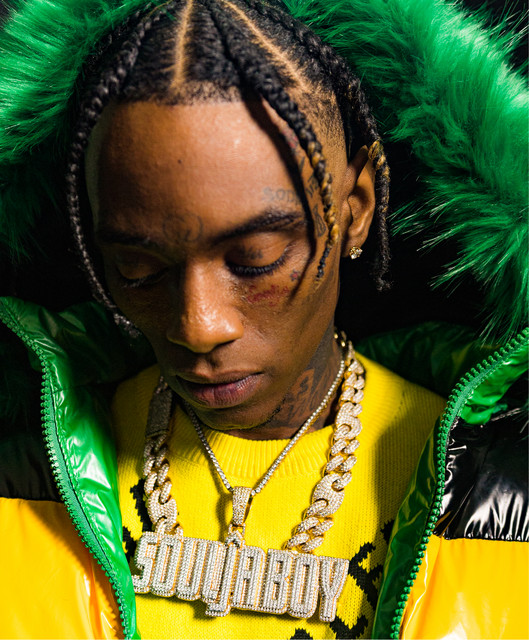 DeAndre Cortez Way (born July 28, 1990), known professionally as Soulja Boy (formerly Soulja Boy Tell 'Em), is an American rapper and record producer. In September 2007, his debut single "Crank That (Soulja Boy)" peaked at number 1 on the U.S. Billboard Hot 100. The single was initially self-published to the internet, and later became a number-one hit in the United States for seven non-consecutive weeks starting in September 2007. On August 17, Way was listed at number 18 on the Forbes list of Hip-Hop Cash Kings of 2010 for earning $7 million that year.

Charleston White shared a video in which he appears to be filing a police report against Soulja and his associate Flo Malcom. Soulja responded with rat emojis.

Soulja Boy Addresses Rumors That He Was Maced by Charleston White

In a response that comes over 12 years late, Soulja Boy replied to an old Wizkid tweet in which the Nigerian singer-songwriter called him “wack.”

Soulja Boy Goes After Migos and Lil Durk, Claims He Can't Get a Song With Them Now That They're Famous

Soulja Boy, who seems to get in a new rap beef each month, has blasted Migos and Lil Durk for not collaborating with him after they got famous.

Soulja Boy Argues He's to Thank for TikTok: 'It Wouldn’t Be No TikTok If It Wasn't for Soulja Boy'

In a new interview, Soulja Boy said that he is basically the creator of TikTok and that he deserves at least a 10 percent cut now that it's super popular.

Soulja Boy Shares He's Having a Baby Through Gender Reveal

Soulja Boy revealed on Instagram that he's having a baby boy. In the past, he's caught baby fever before. "God please bless me I've been patient," he said.

SB has a laugh. Continue reading…

Big Draco is coming to a TV near you. Continue reading…

"Kanye, this is your fault" The post Soulja Boy says Kanye West got him kicked off other rappers’ albums appeared first on NME.

Soulja Boy Tells Trouble He 'Could Be Next' After Young Dolph

Soulja Boy has responded to his viral Drake meme outburst

He also recently buried the hatchet with Kanye West The post Soulja Boy has responded to his viral Drake meme outburst appeared first on NME.

Kanye West apologises to Soulja Boy after dropping him from ‘DONDA’

Ye previously said that he left Soulja off the album because his verse was "trash" The post Kanye West apologises to Soulja Boy after dropping him from ‘DONDA’ appeared first on NME.

Ye apologized to Soulja Boy on Wednesday (Nov. 10) for dropping him from the 'Donda' tracklist without telling him first.

Named after the hit Netflix series, Soulja Boy raps over an instrumental of the show's theme song.

Not a good look for Soulja Boy. Continue reading…

Soulja Boy isn't done sounding off on Kanye West after he was left off of 'Donda' because he's guaranteeing a "diss" toward Ye will be featured on his own album.

Drake is in his feelings. Continue reading…

Soulja Boy posted several tweets on Tuesday (Aug. 31) about Kanye West in light of being left off of Donda, one of which claims West need to apologize to Taylor Swift for interrupting her Best Female Video award speech at the Video Music Awards in 2009.

"Just say you fucked up and left [me] off the album" The post Soulja Boy calls Kanye West a “coward” for cutting him from ‘DONDA’ without warning appeared first on NME.

Soulja Boy appeared to strike out at Kanye West after seemingly being left off the final version of Ye's long-delayed 'Donda' album. See what he said.

Big Draco has an issue with 'Ye. Continue reading…

They Call Me Draco Baby

She Make It Clap (Remix) (With French Montana)

She Make it Clap (Remix) (With French Montana)

She Make It Clap

Where That Bag At

Beatin' out the Pot

Walk in the Drip

Run up a Million

Run up a Bag

Best to Ever Do It

Mario and Domo vs. the World

Stop Playing with Me

Hate That I Love You

Lil Jon & The East Side Boyz