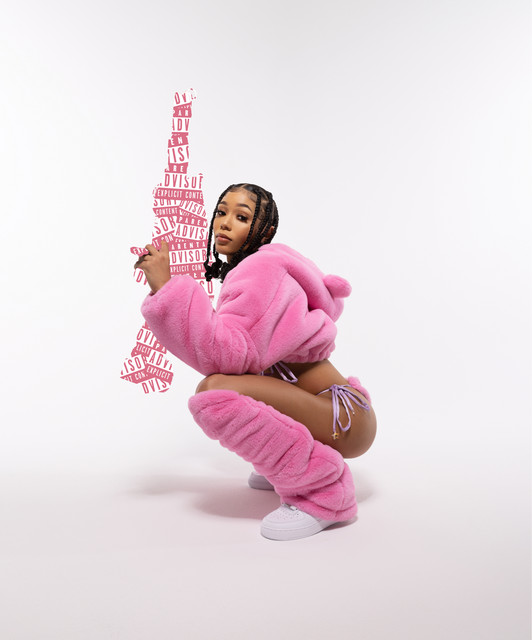 Coi Leray Collins (born May 11, 1997) is an American rapper and singer. Leray began posting music to SoundCloud and released her single "Huddy", along with her debut mixtape Everythingcoz in 2018. After signing a record deal with 1801 Records and Republic Records, she released her second mixtape, EC2 (2019), and her debut extended play, Now or Never (2020). In 2021, the Lil Durk-assisted remix of her single, "No More Parties", reached the top 40 on the Billboard Hot 100, and was certified platinum by the Recording Industry Association of America (RIAA). In 2022, Leray released her debut studio album Trendsetter, which spawned her collaborative single with Nicki Minaj, "Blick Blick", which also reached the top 40 of the Billboard Hot 100.

Coi Leray has shared her new song "Involved," which follows her debut album 'Trendsetter' from April, which has features from Nicki MInaj, Nav, and more.

Fresh off the release of his latest project 'Misunderstood,' Brooklyn rapper B-Lovee has joined forces with Coi Leray for the new song "Demon."

Over the past eight weeks, there have been a string of major rap albums, ranging from Pusha-T to Coi Leray to Kendrick Lamar. We graded each of the rollouts.

Sprite is going global with their new music program, Sprite Limelight, and the initiative has rounded up a diverse collective of acts to execute the project, which is all about keeping your cool. Today, Billboard announced the program, which sees Grammy-winning super-producer James Blake spearheading the project. For his role, Blake was tasked with providing […]

During a performance, Coi Leray gave a fan a lap dance while performing Fivio Foreign's "What's My Name," but kicked him off the stage when he touched her butt.

Blackwell has worked with Coi Leray, Lil Wayne, Kash Doll and more in his time at the label.

Coi Leray shared a message of support for Eminem, after her father called out the Rock & Roll Hall of Fame for inducting the Detroit rapper.

Benzino criticized the Rock & Roll Hall of Fame for inducting Em, saying there were hundreds of Black artists who were more deserving of the honor.

Benzino took aim at 50 Cent and his daughter, Coi Leray, after the TV mogul hinted that he was going to make it his mission to put Coi on television.

Coi is opening up about her relationship with her father Benzino--from accidental single announcements to familial issues--and what she hopes from it.

Coi Leray has offered another response to rapper Erica Banks after she said Nicki Minaj only collaborates with “girls who don’t know how to rap."

Coi Leray Responds to Benzino After He Expressed Support for Her: 'Want Me to Post These Screen Shots'

Coi responded after Benzino started to call people out for commenting on his relationship with his daughter: "Y’all just met her, I’ve known CC my whole life."

Rapper Asian Doll also chimed in with her opinion on the matter after fans compared her to Banks.

The “Blick Blick” rapper took to social media on Monday to respond to DJ Akademiks after he claimed her debut album sold 9,000 units in its first week.

Benzino addresses his public spat with daughter Coi Leray, his ongoing feud with 50 Cent, and his alleged relationship with Shauna Brooks in a new song.

Though the figures have not been verified, Leray's debut album 'Trendsetter' is reportedly projected to sell 11,000 units in its first week.

Leray’s passion is thrilling to listen to, and her music is provocatively weird and full of stylistic pivots

Coi Leray Airs Out Benzino, Says Father Threatened Her and Her Mom Over Saying He's Broke

Coi Leray took to Twitter to voice her frustration with her father Benzino, who she claims has been threatening her and her mother because Coi called him broke.

With her debut album 'TRENDSETTER' out Friday (April 8), Coi Leray is ready for the big stage.

During her new interview on the 'Breakfast Club,' Coi Leray suggested Charlamagne and his co-hosts are “dinosaurs” after he said he listens to Pusha-T.

Nearly six months after the release of his latest album 'They Got Amnesia,' French Montana returns with a music video for standout track "Push Start."

Fresh off revealing the artwork and release date for her debut album 'Trendsetter,' Coi Leray took to Instagram on Thursday to share the features.

The collaboration between female rappers also starts as the genre's top-selling song of the week.

The One (Sprite Limelight)