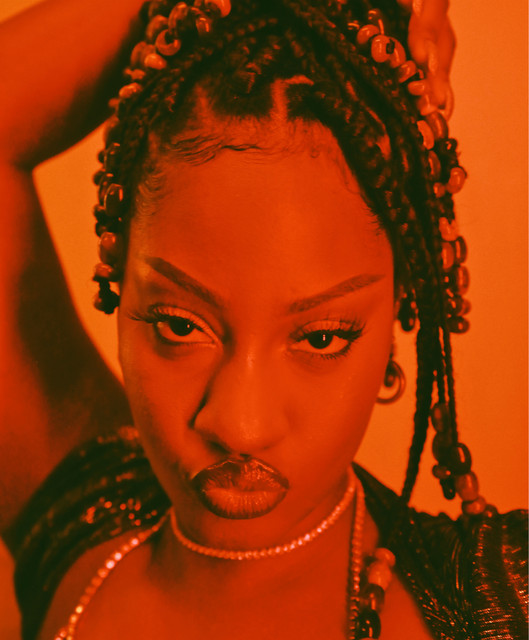 Temilade Openiyi (born 11 June 1995), known professionally as Tems, is a Nigerian singer, songwriter, and record producer. She rose to prominence after she was featured on Wizkid's 2020 single, "Essence", which reached the top ten of the Billboard Hot 100 after the release of a remixed version with an additional feature from Justin Bieber, and earned her a Grammy Award nomination. That same year, she was featured on Drake's song, "Fountains".

On 25 September 2020, she released her debut extended play, For Broken Ears. Tems released her second extended play, If Orange Was a Place (2021), after being signed to RCA Records. In 2022, Tems' vocals from her song "Higher" were sampled by Future on his single, "Wait for U", which led to her being credited as a featured artist on the song. It debuted atop the Billboard Hot 100, making her the first African artist to debut at number one and the second Nigerian artist to top the chart.

Tems covered Bob Marley's "No Woman, No Cry" for the Marvel movie Black Panther: Wakanda Forever soundtrack, released in July 2022 and in the same month her song "Free Mind" from her debut EP debuted on the Hot 100.

Tems, Ayra Starr, Davido and Adekunle Gold are this year's other leading nominees.

The rendition first appeared in the film's recent trailer The post Hear Tems’ cover of ‘No Woman No Cry’ from new ‘Wakanda Forever Prologue’ EP appeared first on NME.

Even Fame & Stardom Can’t Take Away Tems’ Peace of Mind

"I didn't magically transform into a God overnight, but I am going to be the best I can possibly be in this life," says the 27-year-old singer-songwriter in her new interview with Billboard.

Future Ends 5-Year ‘Wait’ for Next R&B/Hip-Hop Airplay No. 1

The new champ is his third leader, while Tems is back for a second time and Drake extends his record yet again.

Sierra spent over five years with Apple Music, playing a crucial role in the careers of artists like Summer Walker, Giveon and Tems.

The singer's resurgent 2020 hit makes her the first woman to lead the three-month-old list.

Toronto's Manifesto Festival celebrates its 16th edition this summer with a lineup of performers like Jazmine Sullivan, Tems, Dylan Sinclair, Amaal, and more.

With "Wait For U" debuting at No. 1 on the Hot 100, Future took to Twitter to reveal why Tems, who's sampled on the song, is credited as a featured artist.

Future’s “Wait For U” with Drake and Tems, taken from the Atlanta rapper's new album 'I Never Liked You,' debuted at the No. 1 spot on the Billboard Hot 100.

Following the release of 'I Never Liked You,' Future has shared the video for “Wait for U” featuring Drake as a knight in shining armor atop a horse.

Follow along with the lyrics to Future's 2022 collaboration with Drake and Tems.

These managers and management teams have set the bar for what it takes to successfully break new talent.

The biweekly show will debut April 2 on the streaming service.

The Afrobeats stars took over an empty arena for the clip The post Watch Wizkid perform ‘Essence’ live on ‘The Tonight Show’ with Tems appeared first on NME.

Wizkid & Tems Deliver Their ‘Essence’ From an Empty Stadium for ‘The Tonight Show’: Watch

Complete with sultry dance moves and stellar vocals, their live rendition was just as raw as the recorded track.

If Orange Was A Place