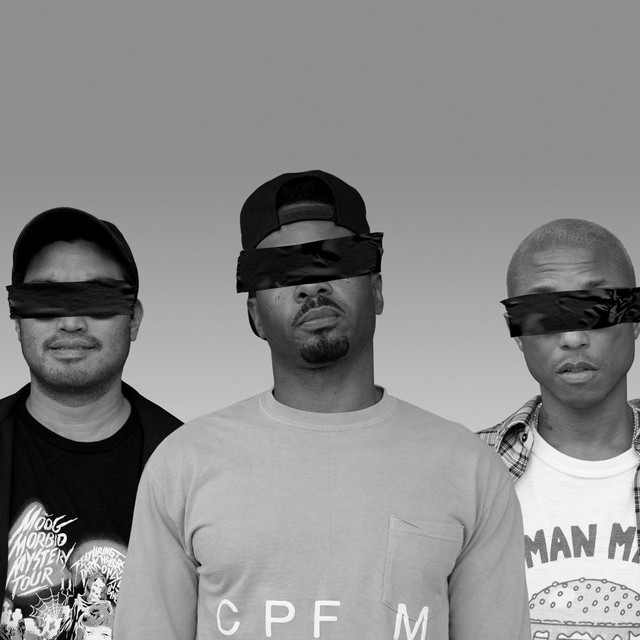 N.E.R.D. (stylized as N⋆E⋆R⋆D and N.E.R.D, a backronym of No-one Ever Really Dies) is a hip hop and rock band, formed in Virginia Beach, Virginia, in 1999. Pharrell Williams and Chad Hugo were signed by Teddy Riley to Virgin Records as a duo, The Neptunes. After producing songs for several artists throughout the late 1990s, the production duo formed the band with Shay Haley as a side project of The Neptunes in 1999. N.E.R.D.'s debut album, In Search Of..., sold 603,000 copies in the United States and was certified Gold by the Recording Industry Association of America (RIAA). It was also awarded the second annual Shortlist Music Prize. The band's second album, Fly or Die, sold 412,000 copies in the United States, but shipped at least 500,000 units, certifying it Gold.In 2005, N.E.R.D. ended their contract with Virgin and disbanded. Three years later, the band reunited under Star Trak Entertainment, a subsidiary of Interscope Records established by Williams and Hugo. The band's third album, Seeing Sounds, released in 2008, sold just under 80,000 copies in its first week. The album was followed by Nothing, which was released in 2010.

N.E.R.D. then began advertising in October 2017 after not saying much since their 2010 album, which made fans speculate that the group had a new album or project in the works. It was later revealed the album would be entitled No One Ever Really Dies, explaining their initial advertisements and confirming the rumors of fans. The group then released the first single for the album, "Lemon", in early November of the same year. The album was also announced to have collaborations with many popular artists, including Kendrick Lamar, André 3000, M.I.A., Future, Wale, Gucci Mane, Rihanna, and Ed Sheeran, and was released on December 15, 2017.

How N.E.R.D.’s Debut Brought the Dawn of a Boundless Era

'In Search Of…' confused many critics in 2002, but its bold step outside of race and genre expectations resonates in today's culture

The N.E.R.D and Neptunes hitmaker revealed that the Roc Nation rapper "writes in falsetto" The post Pharrell on JAY-Z’s creative process: “He’s an odd guy” appeared first on NME.

NO ONE EVER REALLY DIES

Squeeze Me (Music from The Spongebob Movie Sponge Out Of Water)

Hypnotize U The Remixes

She Wants To Move