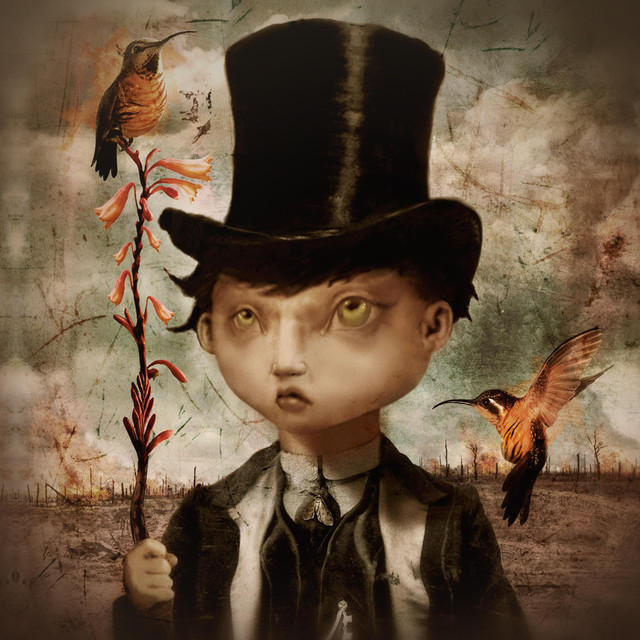 Johnny Hollow is a music/art collaboration between founding members Janine White & Vincent Marcone, known for weaving together cinematic songs and darkly beautiful imagery. Their unique brand of avant-garde pop blends organic instruments with electro-industrial sounds. Often featured is the haunting cello of contributing member Kitty Thompson. Always accompanied by intricate dark art, they fall into a niche that touches on steampunk and goth genres, while evading specific categorization. Over the years they have acquired an impressive legion of devoted fans who have supported several successful crowd-sourcing campaigns.White is a classically-trained musician and composer who is also a critically acclaimed sound designer. Marcone (and his famed alter ego, My Pet Skeleton) is a Juno award-winning graphic artist who combines traditional and digital techniques to craft album covers, fairy tales, short films and music videos.Johnny Hollow has produced 3 full-length albums: Johnny Hollow (2003), Dirty Hands (2008), and A Collection of Creatures (2014), and two EPs: Devil's Night (2010) and Old Gods of New Berlin (2018), along with a number of remixes. Their music has been featured on Lost Girl, On a Sunny Afternoon, and The Facts in the Case of Mister Hollow.

My Lovely Jinn (Alias One Let's Burn Together Remix)

The Old Gods of New Berlin

A Collection of Creatures