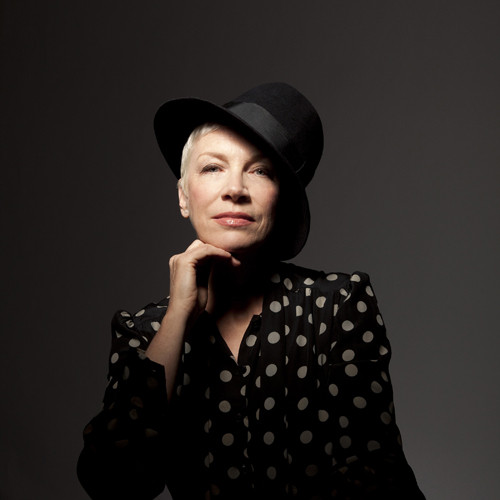 Ann Lennox (born 25 December 1954) is a Scottish singer-songwriter, political activist and philanthropist. After achieving moderate success in the late 1970s as part of the new wave band the Tourists, she and fellow musician Dave Stewart went on to achieve international success in the 1980s as Eurythmics. Appearing in the 1983 music video for "Sweet Dreams (Are Made of This)" with orange cropped hair and wearing a man's business suit, the BBC states, "all eyes were on Annie Lennox, the singer whose powerful androgynous look defied the male gaze". Subsequent hits with Eurythmics include "There Must Be an Angel (Playing with My Heart)" and "Here Comes the Rain Again".

Lennox embarked on a solo career in 1992 with her debut album, Diva, which produced several hit singles including "Why" and "Walking on Broken Glass". The same year, she performed "Love Song for a Vampire" for Bram Stoker's Dracula. Her 1995 studio album, Medusa, includes cover versions of songs such as "No More 'I Love You's'" and "A Whiter Shade of Pale". To date, she has released six solo studio albums and a compilation album, The Annie Lennox Collection (2009). With eight Brit Awards, which includes being named Best British Female Artist a record six times, Lennox has been named the "Brits Champion of Champions". She has also collected four Grammy Awards and an MTV Video Music Award. In 2002, Lennox received a Billboard Century Award; the highest accolade from Billboard. In 2004, she received the Golden Globe and the Academy Award for Best Original Song for "Into the West", written for the soundtrack to the feature film The Lord of the Rings: The Return of the King.

Lennox's vocal range is contralto. She has been named "The Greatest White Soul Singer Alive" by VH1 and one of The 100 Greatest Singers of All Time by Rolling Stone. In 2012, she was rated No. 22 on VH1's 100 Greatest Women in Music. In June 2013 the Official Charts Company called her "the most successful female British artist in UK music history". As of June 2008, including her work with Eurythmics, Lennox had sold over 80 million records worldwide. As part of a one-hour symphony of British Music, Lennox performed "Little Bird" during the 2012 Summer Olympics closing ceremony in London. At the 2015 Ivor Novello Awards, Lennox was made a fellow of the British Academy of Songwriters, Composers and Authors, the first woman to receive the honour. Lennox (and Eurythmics partner Dave Stewart) was inducted into the Songwriters Hall of Fame in 2020 and the duo were inducted into the Rock and Roll Hall of Fame in 2022.In addition to her career as a musician, Lennox is also a political and social activist, raising money and awareness for HIV/AIDS as it affects women and children in Africa. She founded the SING Campaign in 2007 and founded a women's empowerment charity called The Circle in 2008. In 2011, Lennox was appointed an OBE by Queen Elizabeth II for her "tireless charity campaigns and championing of humanitarian causes". On 4 June 2012, she performed at the Queen's Diamond Jubilee Concert in front of Buckingham Palace. In 2017, Lennox was appointed Glasgow Caledonian University's first female chancellor.

Songwriters Hall of Fame: Class of 2022 Lifts the Veil on Crafting Beloved Songs

Duo plan on performing live on induction night, but just don't expect them to reunite for the 40th anniversary of Sweet Dreams (Are Made of This) next year

"We're both, I supposed, kind of shocked, because we'd been nominated before," Stewart tells Billboard.

Annie Lennox on Eurythmics’ Rock Hall Nom: ‘We’ve Pretty Much Done Everything It Takes to Survive’

"We’ve pretty much done everything it takes to survive in the industry of music, just like all the artists who’ve been nominated for the Hall of Fame,” Annie Lennox tells Billboard.

The event will be live-streamed this Sunday The post Ed Sheeran, Nile Rodgers, Annie Lennox and more to perform for India COVID-19 fundraiser appeared first on NME.

Each Sunday, Pitchfork takes an in-depth look at a significant album from the past, and any record not in our archives is eligible. Today we revisit Annie Lennox’s 1992 solo debut, a joyous and liberated pop album with a prophetic message about the disillusionment of fame.

Lennox has also donated signed merchandise for the event, which will be given to the top six donors of the live auction.

I've Got A Life/Sweet Dreams Remix

I've Got A Life

I've Got a Life

We Too Are One (Remastered)

We Too Are One

Be Yourself Tonight (2018 Remastered)

Sweet Dreams (Are Made Of This)