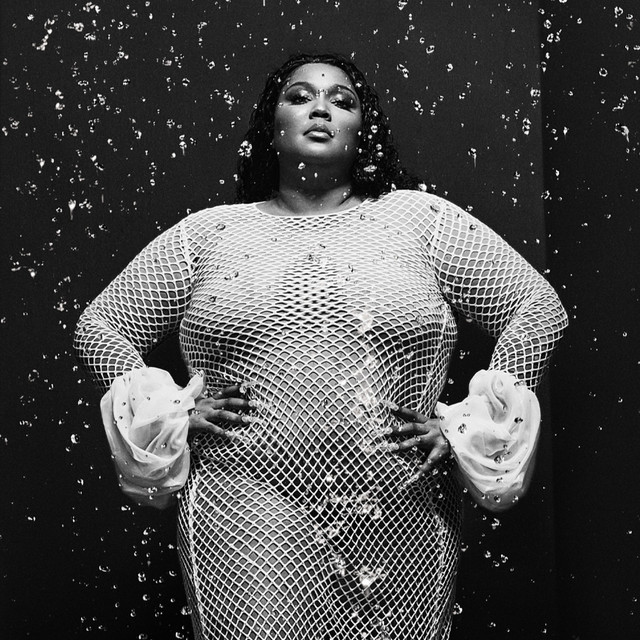 Melissa Viviane Jefferson (born April 27, 1988), known professionally as Lizzo, is an American singer, rapper and songwriter. Born in Detroit, Michigan, she later moved to Houston, Texas, where she began performing before moving to Minneapolis, where she began her recording career in hip hop music. Prior to signing with Nice Life and Atlantic Records, Lizzo released two studio albums—Lizzobangers (2013) and Big Grrrl Small World (2015). Lizzo's first major-label EP, Coconut Oil, was released in 2016.

Lizzo attained mainstream success with the release of her third studio album, Cuz I Love You (2019), which peaked inside the top five of the US Billboard 200. The album spawned the singles "Juice" and "Tempo". The deluxe version of the album included Lizzo's 2017 single "Truth Hurts", which became a viral sleeper hit, two years after its initial release. It topped the US Billboard Hot 100, and became the longest-leading solo song by a female rapper. Around this time, her 2016 single "Good as Hell" also climbed the charts, reaching the top ten on the Billboard Hot 100 and UK Singles Chart. Lizzo received eight nominations at the 62nd Annual Grammy Awards, the most for any artist that year, including nominations for each of the "Big Four" categories; and eventually won the awards for Best Urban Contemporary Album, Best Pop Solo Performance for "Truth Hurts", and Best Traditional R&B Performance for the song "Jerome".

Aside from singing and rapping, Lizzo has also worked as an actor: she served as a voice performer in the animated film UglyDolls (2019) and appeared in the crime comedy-drama film Hustlers (2019). Furthermore, she is the host of the Amazon Prime Video reality television series Lizzo's Watch Out for the Big Grrrls. In 2019, Time named Lizzo as "Entertainer of the Year" for her meteoric rise and contribution to music. In addition to her three Grammy Awards, she has also won a Billboard Music Award, a BET Award, and two Soul Train Music Awards.

The "About Damn Time" singer also shared a clip making waves -- literally -- as she twerked in the ocean in a blue bikini.

Lizzo gushes over J-hope’s spin on ‘About Damn Time’

The BTS star sat down for a chat with NME at Lollapalooza where he offered up his take on Lizzo's hit The post Lizzo gushes over J-hope’s spin on ‘About Damn Time’ appeared first on NME.

“I’m a singer, so I kind of just relaxed myself, relaxed my larynx,” the actor said, explaining how he perfected his sub-bass Vecna voice.

Tracing the Hot 100's history from the first No. 1 through the latest.

"I'm a singer, so I kind of just relaxed myself, relaxed my larynx," the actor said, explaining how he perfected his sub-bass Vecna voice.

Lizzo responds to viral video of young fan dancing to ‘About Damn Time’: “That is my Grammy right there”

The track featured on the rapper's recent album 'Special' The post Lizzo responds to viral video of young fan dancing to ‘About Damn Time’: “That is my Grammy right there” appeared first on NME.

Queen Bey faced criticism for using the same ableist term that Lizzo removed from “Grrrls” and Diane Warren is feeling the heat from the BeyHive.

Some fans pointed out that the two stars were both trending for removing an offensive lyric from their new albums.

Lizzo Praises J-Hope Ahead of Lollapalooza: ‘I’m So Proud of Him!!!!’

The K-pop star also named "About Damn Time" as his favorite song of the moment.

Weeks after Lizzo changed the lyrics of a song featuring the same slur, Beyoncé will rewrite a line that appeared on her new album

Beyoncé to Remove Ableist Slur From Song ‘Heated’ After Backlash

Just like Lizzo did, Beyoncé faced an uproar over her use of the word "spaz" in a new song

It comes just weeks after Lizzo was also criticised for a derogatory term in her lyrics The post Beyoncé faces backlash over ableist slur on new ‘Renaissance’ track ‘Heated’ appeared first on NME.

Despite a 10-year age difference, YK Osiris didn't shy away from publicly shooting his shot with Lizzo, telling the pop star to check her DMs.

Lizzo gets a special gift from Harry Styles for her hit song ‘About Damn Time’ reaching No.1 on our Hot 100 chart, Ed Sheeran breaks a Spotify record and more!

Lizzo Smells the Roses & Pops Champagne While Celebrating Going to No.1 On the Hot 100 | Billboard News

On Tuesday (July 26), the singer showed off a massive, colorful bouquet of flower sent to her by fellow pop star Harry Styles in celebration of her Billboard Hot 100 No. 1 single “About Damn Time.”

The gift was a celebration of her "About Damn Time" single hitting No. 1.

Find Out How to Stay At this BTS House, BLACKPINK Tease ‘Ready to Love Music Video & More | Billboard News

Find out how to stay at this BTS house, Blackpink tease their music video for their new song ‘Ready to Love’, Lizzo reacts to hitting the top of the Hot 100, and more!

Lizzo Recorded ’50 Versions’ of ‘About Damn Time’ Before Nailing the Chorus: ‘BUT IT WAS WORTH IT’

Lizzo's determination to get the song's hook just right clearly paid off, considering "About Damn Time" ascends to the top of the Hot 100 this week.

Five Burning Questions: Lizzo Debuts at No. 2 on Billboard 200 With ‘Special’ & Tops Hot 100 With ‘About Damn Time’

Lizzo's new album scores her best first-week numbers, while she also notches her second Hot 100 No. 1.

BTS' J-Hope re-enters the chart at No. 9 thanks to his solo album 'Jack in the Box.'

Lizzo tops the Hot 100 with her hit ‘About Damn Time’, Kid Cudi gets angry and storms off the stage at Rolling Loud Miami, Adele reschedules the Las Vegas residency dates, Posh Spice sings a Spice Girls classic and more!

Lizzo Tops the Hot 100, Celebrates ‘About Damn Time’ Being ‘The #1 Song in the Country YALL’

Let us know your favorite of Lizzo's Hot 100 hits by voting in our poll.

Lizzo‘s “About Damn Time” clocks in at No. 1 on the Billboard Hot 100 songs chart, rising from No. 2. The track becomes Lizzo’s second Hot 100 leader, after “Truth Hurts” dominated for seven weeks beginning in September 2019.

Blame It on Your Love

Cuz I Love You

Cuz I Love You (Super Deluxe)