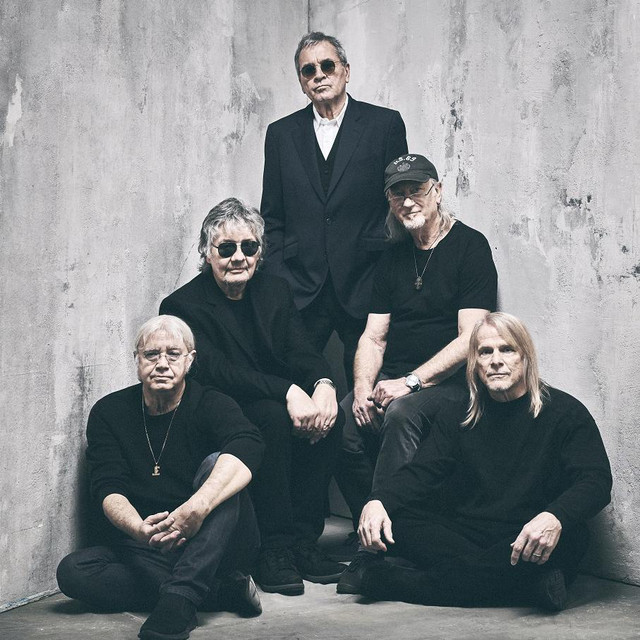 Deep Purple are an English rock band formed in London in 1968. They are considered to be among the pioneers of heavy metal and modern hard rock, but their musical approach has changed over the years. Originally formed as a psychedelic rock and progressive rock band, they shifted to a heavier sound with their 1970 album Deep Purple in Rock. Deep Purple, together with Led Zeppelin and Black Sabbath, have been referred to as the "unholy trinity of British hard rock and heavy metal in the early to mid- seventies". They were listed in the 1975 Guinness Book of World Records as "the globe's loudest band" for a 1972 concert at London's Rainbow Theatre and have sold over 100 million albums worldwide.Deep Purple have had several line-up changes and an eight-year hiatus (1976–1984). The 1968–1976 line-ups are commonly labelled Mark I, II, III and IV. Their second and most commercially successful line-up consisted of Ian Gillan (vocals) and Roger Glover (bass), who joined founder members Jon Lord (keyboards), Ian Paice (drums) and Ritchie Blackmore (guitar). This line-up was active from 1969 to 1973 and was revived from 1984 to 1989 and again from 1992 to 1993. The band achieved more modest success in the intervening periods between 1968 and 1969 with the line-up including Rod Evans (lead vocals) and Nick Simper (bass, backing vocals), between 1974 and 1976 with the line-up including David Coverdale (lead vocals) and Glenn Hughes (bass, vocals) (and Tommy Bolin replacing Blackmore in 1975), and between 1989 and 1992 with the line-up including Joe Lynn Turner (vocals). The band's line-up (currently including Ian Gillan, and guitarist Steve Morse from 1994) has been much more stable in recent years, although keyboardist Jon Lord's retirement from the band in 2002 (being succeeded by Don Airey) left Ian Paice as the last original Deep Purple member still in the band.

Deep Purple was ranked number 22 on VH1's Greatest Artists of Hard Rock programme, and a poll on radio station Planet Rock ranked them 5th among the "most influential bands ever". The band received the Legend Award at the 2008 World Music Awards. Deep Purple (specifically Blackmore, Lord, Paice, Gillan, Glover, Coverdale, Evans, and Hughes) were inducted into the Rock and Roll Hall of Fame in 2016.

"I continue to be privileged to be a part of the Purple family tree" The post Deep Purple guitarist Steve Morse steps away from live duties appeared first on NME.

Round Hill's acquisition includes Coverdale's music publishing and master recording royalties and from his three-album stint with Deep Purple.

Cleopatra Records, who released the track, say their "hearts go out to all of DMX’s family, friends and supporters" while he remains on life support in hospital The post ‘X Moves’, a new DMX song featuring Bootsy Collins and Deep Purple’s Ian Paice, has been released appeared first on NME.

All I Got Is You

To the Rising Sun (In Tokyo) (Live)

The Now What?! Gold Edition

Above and Beyond (Live)

All the Time in the World (Digital Special Edition) (Live)

The Now What?! Live Tapes

Rapture of the Deep

In Concert With The London Symphony Orchestra (Live)

The Battle Rages On

The House Of Blue Light

When We Rock, We Rock and When We Roll, We Roll

Made in Europe (Live)

Who Do We Think We Are (Deluxe Edition)

Who Do We Think We Are

Made in Japan (Deluxe Edition)