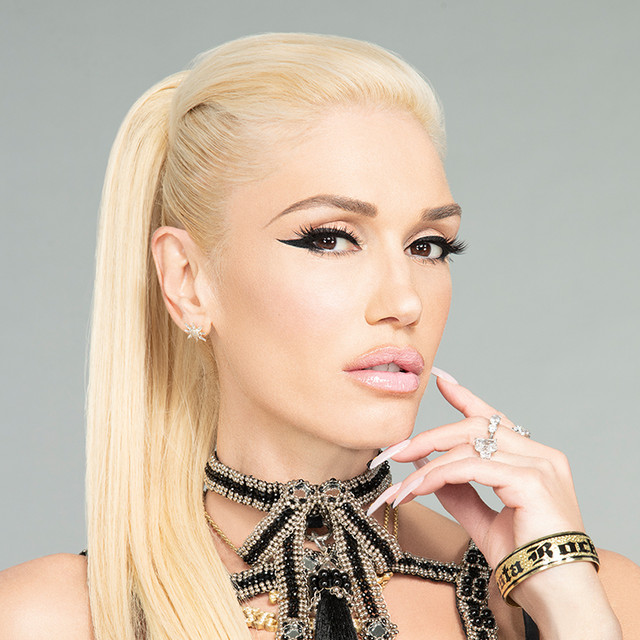 Gwen Renée Stefani (; born October 3, 1969) is an American singer, rapper, songwriter, fashion designer and actress. She is a co-founder, lead vocalist, and the primary songwriter of the band No Doubt, whose singles include "Just a Girl", "Spiderwebs", and "Don't Speak", from their 1995 breakthrough studio album Tragic Kingdom, as well as "Hey Baby" and "It's My Life" from later albums.

During the band's hiatus, Stefani embarked on a solo pop career in 2004 by releasing her debut studio album Love. Angel. Music. Baby. Inspired by pop music from the 1980s, the album was a critical and commercial success. It spawned six singles, including "What You Waiting For?", "Rich Girl", "Hollaback Girl", and "Cool". "Hollaback Girl" reached number one on the Billboard Hot 100 chart while also becoming the first US download to sell one million copies. In 2006, Stefani released her second studio album, The Sweet Escape. Among the singles were "Wind It Up" and "The Sweet Escape", the latter of which was number three on the Billboard Hot 100 year-end chart of 2007. Her third solo album, This Is What the Truth Feels Like (2016), was her first solo album to reach number one on the Billboard 200 chart. Her fourth solo album and first full-length Christmas album, You Make It Feel Like Christmas, was released in 2017 and charted 19 tracks on Billboard's Holiday Digital Song Sales component chart in the United States. Stefani has released several singles with Blake Shelton, including "Nobody but You" (2020), which reached number 18 in the US.

Stefani has won three Grammy Awards. As a solo artist, she has received an American Music Award, Brit Award, World Music Award, and two Billboard Music Awards. In 2003, she debuted her clothing line L.A.M.B. and expanded her collection with the 2005 Harajuku Lovers line, inspired by Japanese culture and fashion. Billboard magazine ranked Stefani the 54th most successful artist and 37th most successful Hot 100 artist of the 2000–2009 decade. VH1 ranked her 13th on their "100 Greatest Women in Music" list in 2012. Including her work with No Doubt, Stefani has sold more than 30 million albums worldwide.

Your Favorite Artist Needs Touring Musicians. Jammcard is Supplying Them

Harry Styles, Gwen Stefani and the Chainsmokers have all used the company that has the most comprehensive database of professional musicians for hire in the music industry

"God really gave me you for the ups and downs," Stefani wrote of Shelton.

"You r so loved and we can't wait to see what happens next!!" Stefani wrote in her birthday wish to her firstborn son, Kingston.

The singer, who served as a team mentor in previous seasons, will join Gwen Stefani, John Legend, and Blake Shelton

Camila Cabello Joining ‘The Voice’ as Coach This Fall

Olivia Rodrigo Delivers a Raging ‘Just a Girl’ Cover: ‘I Am the Biggest Gwen Stefani Fan in the World’

"I got to talk to her for a while, and she's just the coolest human in the world" Rodrigo said of meeting Stefani at the 2022 Met Gala.

Gwen Stefani Did Her Own Makeup for the 2022 Met Gala: Where to Buy the Products She Used

Gwen Stefani Is a Spring Break Cowgirl in New Selfie: See the Pic

The pop singer appears to be spending the break in husband Blake Shelton's native Oklahoma.

The pop star also said that she feels "very blessed" to have Shelton in her life.

"It's just the greatest thing that's ever happened to me," Stefani said of being married to Blake Shelton.

"Why come back as a Country Boy when I can dress like one now?!" she captioned her video.

"There is truly no place like the Hollywood Bowl," L.A. Phil music director Gustavo Dudamel said in regard to plans for the 100th season.

"There ain’t #NobodyButYou," he wrote, referencing the couple's single.

Gwen Stefani Launches ‘GXVE’ Beauty: “This Feels Like the Next Chapter of My Life”

From a her signature red lip to winged eyeliner, here’s how fans can now shop Gwen Stefani’s new collection.

Gwen Stefani continues to reminisce on her wedding to Blake Shelton, and gave fan a look at when she said yes to the dress on Tuesday (Sept. 20) via Instagram.

Gwen Stefani's boys are suited up and grown up in a new photo their mom shared from her wedding to Blake Shelton over the weekend.

Gwen Stefani payed homage to her now husband Blake Shelton and her three sons on her custom Vera Wang wedding dress with a handmade detail.

"All these rules are just dividing us more and more" The post Gwen Stefani responds to cultural appropriation claims over ‘Harajuku Girls’ appeared first on NME.

Blake Shelton appeared on The Tonight Show on Wednesday (May 19) to talka about the first song he and Gwen Stefani plan to dance to at their upcoming wedding.

Listen to Gwen Stefani and Saweetie team up on ‘Slow Clap’

The track is an updated version of the single Stefani dropped last month The post Listen to Gwen Stefani and Saweetie team up on ‘Slow Clap’ appeared first on NME.

Gwen Stefani Jokingly Invites Ellen to Be Her Maid of Honor, Complete With Mauve Bridesmaid Dress

With Miley Cyrus' irresistible offer to be Gwen Stefani and Blake Shelton's wedding singer on the table, Stefani is looking to another A-lister to be her maid of honor.

Gwen Stefani stopped by Jimmy Kimmel Live! on Monday night (March 15) to talk about living on fiancé Blake Shelton's ranch and whether she thinks No Doubt will ever get back together.

Let Me Reintroduce Myself

Used To Love You (MAIZE Remix)

Now That You Got It (Remixes)