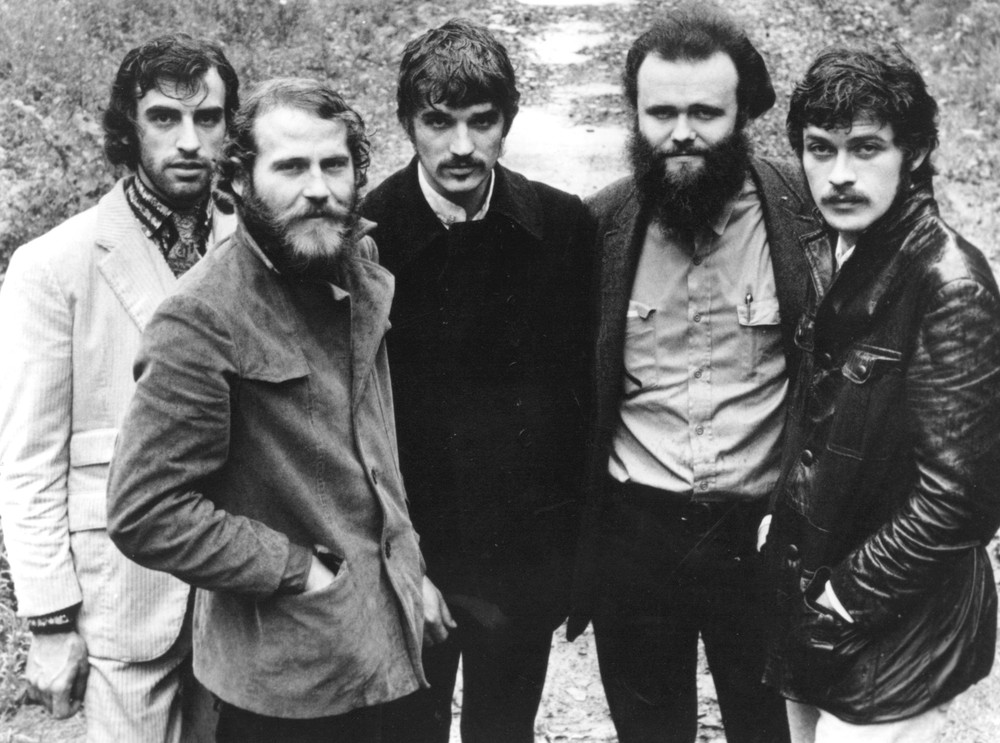 Between 1958 and 1963, the group was known as the Hawks, a backing band for rockabilly singer Ronnie Hawkins. In the mid-1960s, they gained recognition for backing Bob Dylan, and the 1966 concert tour was notable as Dylan's first with an electric band. After leaving Dylan and changing their name to "The Band", they released several records to critical and popular acclaim, including their debut album Music from Big Pink, in 1968. According to AllMusic, the album's influence on several generations of musicians has been substantial: musician Roger Waters called Music from Big Pink the second-most influential record in the history of rock and roll, and music journalist Al Aronowitz called it "country soul ... a sound never heard before". Their most popular songs included "The Weight","The Night They Drove Old Dixie Down" and “Up on Cripple Creek”.

Music critic Bruce Eder described the Band as "one of the most popular and influential rock groups in the world, their music embraced by critics ... as seriously as the music of the Beatles and the Rolling Stones." The Band was inducted into the Canadian Music Hall of Fame in 1989 and the Rock and Roll Hall of Fame in 1994. In 2004, Rolling Stone ranked them 50th on its list of the 100 greatest artists of all time, while ranking "The Weight" 41st on its list of the 500 greatest songs of all time. In 2008, the group received the Grammy Lifetime Achievement Award, and in 2014, they were inducted into Canada's Walk of Fame.

She's quite literally 'Part Of The Band' The post Japanese Breakfast reveals she sang on “fave band” The 1975’s new song ‘Part Of The Band’ appeared first on NME.

The first song from the group's forthcoming fifth album arrives tomorrow (July 7) The post Hear another preview of The 1975’s new single ‘Part Of The Band’ appeared first on NME.

Matty Healy has shared a saxophone-flecked teaser of the new single, set to arrive next week The post Listen to a snippet of The 1975’s comeback single ‘Part Of The Band’ appeared first on NME.

The track is set to land on July 7, signalling the band's return The post Lyrics to The 1975’s new song ‘Part Of The Band’ teased on billboards appeared first on NME.

The 1975 tease ‘Part Of The Band’, arriving next month

The band will share new material on the previously revealed date of July 7 The post The 1975 tease ‘Part Of The Band’, arriving next month appeared first on NME.

The Band's Robbie Robertson called Hawkins the legendary group's "mentor" and "the one who made all this happen" The post Rockabilly legend and The Band associate Ronnie Hawkins dies aged 87 appeared first on NME.

Robbie Robertson Remembers Ronnie Hawkins: ‘The One Who Made This All Happen’

"The story of The Band began with Ronnie Hawkins. He was our mentor. He taught us the rules of the road"

His rock group, the Hawks, became The Band when they moved to the U.S. Hawkins famously joined them again onstage in 1978 as captured in Scorsese's 'The Last Waltz'

Hawkins cut hits like “Who Do You Love?” and featured prominently in Martin Scorsese’s 1978 documentary The Last Waltz

The guitarist will guest star in an episode of CBBC’s ‘Andy And The Band’ The post Queen’s Brian May to make his acting debut in “anti-bullying” kids TV show appeared first on NME.

"Wishing everyone a very MARRIED Christmas…," Perry said via Instagram.

You can listen to the previously unreleased "Band Demo" version of 'Coney Island' now The post Death Cab For Cutie announce 20th anniversary reissue of ‘The Photo Album’ appeared first on NME.

35-track deluxe edition includes unreleased tracks, rarities, B-sides, demos and band's covers of Björk’s “All Is Full of Love” and The Stone Roses’ “I Wanna Be Adored"

The album is being previewed by the new track 'Crutch' The post Band Of Horses announce new album ‘Things Are Great’, their first in five years appeared first on NME.

Live At The Academy Of Music 1971 (Deluxe Edition)

High On The Hog

Before The Flood (Live)

New Riders of the Purple Sage