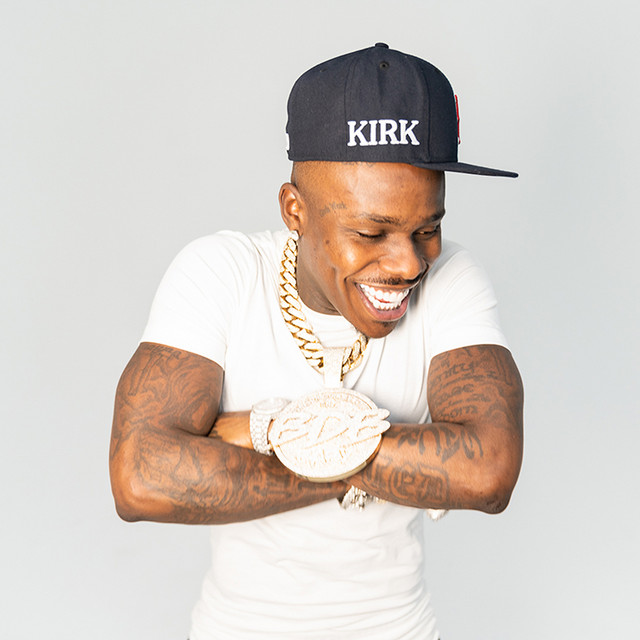 Jonathan Lyndale Kirk (born December 22, 1991), known professionally as DaBaby (formerly known as Baby Jesus), is an American rapper. After releasing several mixtapes between 2014 and 2018, he rose to mainstream prominence in 2019.

DaBaby's debut studio album Baby on Baby (2019) peaked at number seven on the Billboard 200, while his second studio album, Kirk (2019), debuted at number one. The former album featured the Billboard Hot 100 top-ten single "Suge", while the latter featured the multi-platinum records "Intro" and "Bop".His third studio album, Blame It on Baby (2020), became his second consecutive number-one album in the US. The album included his highest-charting song, "Rockstar" (featuring Roddy Ricch), which spent seven non-consecutive weeks at number one on the Billboard Hot 100.

Fresh off teaming up with Davido for their new collaborative single “Showing Off Her Body,” DaBaby returns with his latest solo offering “Tough Skin.”

DaBaby Would Have Voted For Kanye West for President, But Says He’s Now a Donald Trump Supporter

He said the twice-impeached Trump's help in getting fellow MC Kodak Black get sprung from jail is part of his reason for supporting 45.

DaBaby Says He Charges $200K for Club Appearances, Got Around $300K for Dua Lipa Collab

In an interview on the Full Send Podcast, DaBaby revealed that he charges $200,000 for a club appearance and once made $300,000 on a feature.

DaBaby has linked up with Nigerian singer Davido for their new track “Showing Off Her Body,” which they’ve shared alongside a Nigeria-shot video.

DaBaby Calls Out DaniLeigh, Claims She's Not Being Honest About Why They Split Up: ‘You Was Stalkin’ My Baby Mama’

DaBaby took to Instagram on Tuesday to respond to DaniLeigh, who opened up about their past relationship in a recent interview with Angie Martinez.

DaniLeigh is moving on from her tumultuous relationship with DaBaby and focusing on her music.

DaniLeigh Reflects on 'Very Triggering' IG Live Fight With DaBaby, Says It Was ‘Very Bad Time’ in Her Life

In a new interview with Angie Martinez, singer and rapper DaniLeigh described her fight with her ex-boyfriend DaBaby on Instagram Live as “very triggering.”

Police say the investigation into the April 13 shooting of an alleged trespasser is “completed and closed.”

After calling out DaBaby for collaborating with YoungBoy Never Broke Again, rapper Calboy further dissed the 'Blame It on Baby' artist in a new interview.

The Iredell County District Attorney's office is reported to have taken a look at the case, ultimately concluding that no charges would be pursued.

After news of the charges broke, the rapper posted footage that appears to show the alleged victim using a racial slur.

The new clip, which Dababy posted on both his Twitter and Instagram accounts, allegedly shows the property manager Gary Prager using the N-word on camera.

DaBaby has been hit with a felony assault charge after he allegedly attacked the owner of a rental property where he was shooting a music video last year.

DaBaby’s legal team has responded to a report that new footage of the fatal shooting inside a Walmart might contradict self-defense narrative.

The previously unseen video of the 2018 incident appeared to show the rapper striking first.

As DaBaby once again finds himself embroiled in controversy, 50 Cent used the Charlotte rapper’s apparent response as an opportunity to troll Tyrese.

The rapper has claimed self-defense in the incident.

The rapper has claimed he acted in self-defence when he shot and killed a 19-year-old at the store, but newly published footage suggests an alternate sequence of events The post DaBaby responds after footage emerges of 2018 fatal Walmart shooting appeared first on NME.

The circumstances surrounding the shooting are given greater context in a new investigative report from 'Rolling Stone' featuring previously unreleased footage.

The controversial rapper shot and killed Jaylin Craig in a Walmart. DaBaby swears he acted in self-defense, but never-before-seen footage raises doubts about his story

The altercation apparently took place during the Spring Jam 2022 concert in Columbus, South Carolina. The details of the incident remain unclear.

SHOWING OFF HER BODY (with Davido)

WIG (with Moneybagg Yo)

Back On My Baby Jesus Sh!t AGAIN

Ball If I Want To

BLAME IT ON BABY (DELUXE)

NO DRIBBLE (with Stunna 4 Vegas)

BLAME IT ON BABY

Back On My Baby Jesus Sh!t