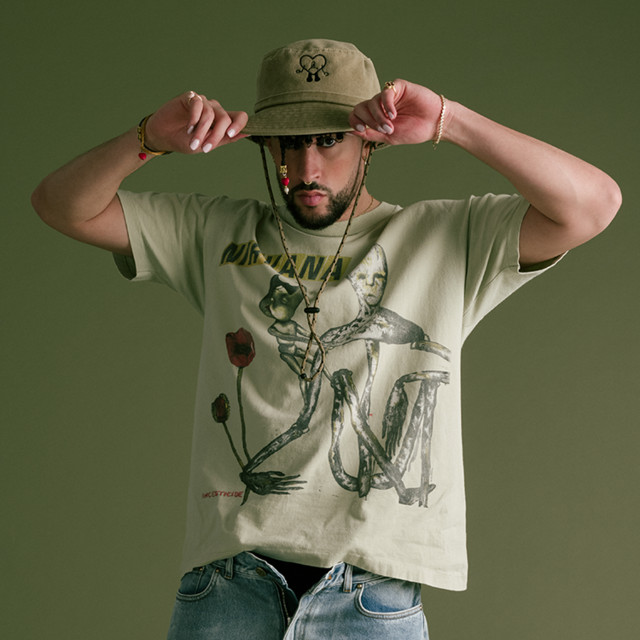 Benito Antonio Martínez Ocasio (born March 10, 1994), known professionally as Bad Bunny, is a Puerto Rican rapper and singer. His music is often defined as Latin trap and reggaeton, but he has incorporated various other genres into his music, including rock, bachata, and soul. He is also known for his deep, slurred vocal style and his eclectic fashion sense. Throughout his career, Bad Bunny has frequently collaborated with artists such as J Balvin, Farruko, Residente, Arcángel, Jhay Cortez, Daddy Yankee and Rosalía.

Born and raised in the municipality of Vega Baja, Puerto Rico, Bad Bunny gained popularity on SoundCloud and was eventually signed to a record label while working in a supermarket as a bagger and studying at the University of Puerto Rico at Arecibo. Following the release of his breakthrough single "Soy Peor" in late 2016, he rose to stardom after collaborating with Cardi B and Drake on the singles "I Like It" and "Mia", which charted on the US Billboard Hot 100 at number one and number five, respectively. His debut album X 100pre (2018) was awarded a Latin Grammy for Best Urban Music Album. His collaborative album with J Balvin, Oasis (2019), contains the popular singles "Qué Pretendes" and "La Canción".

During 2020, Bad Bunny released his second solo studio album YHLQMDLG (Yo hago lo que me da la gana), which earned him a Grammy Award for Best Latin Pop Album; the surprise compilation album Las que no iban a salir; and his third album El Último Tour Del Mundo, which became the first all-Spanish-language album to top the US Billboard 200 and earned him a Grammy Award for Best Música Urbana Album. Bad Bunny has a Billboard Global 200 number-one single with "Dakiti". He performed at the Super Bowl LIV halftime show as a guest, alongside Shakira and Jennifer Lopez, and became the first Latin urban music artist on the cover of Rolling Stone magazine. Time magazine named him one of the 100 most influential people in the world on their annual list (2020). He became the first non-English language act to be Spotify's most streamed artist of the year (2020 and 2021). Bad Bunny began making guest appearances in the professional wrestling promotion WWE in 2021, where he won the WWE 24/7 Championship once and competed in and won a tag team match at its flagship event, WrestleMania 37 for which he received praise.

The track holds strong at No. 1 on Hot Latin Songs & Latin Streaming Songs for a 13th week.

Bad Bunny’s ‘Un Verano Sin Ti’ Back at No. 1 for Eighth Week on Billboard 200 Chart

Plus: YoungBoy Never Broke Again and Eminem debut in top 10.

From Natti Natasha to Bad Bunny, here are the best Latin news items this week.

These Six Artists Could Make History at the Latin Grammys

With Bad Bunny’s continued dominance, he — along with Rosalia, Bizarrap and more — could break records in the Big Four categories this year.

Bad Bunny's latest album 'Un Verano Sin Ti' continues its impressive run on the Billboard 200 chart with a seventh nonconsecutive week at No. 1.

Plus: SEVENTEEN and Jack White debut in top 10.

The Bad Bunny LP has spent six nonconsecutive weeks atop the weekly Billboard 200 albums chart, including the latest tally.

This Summer, Barack Obama Is Listening to Beyoncé, Bad Bunny, and… Fatboy Slim?

The heartbreak anthem is making a comeback on social media.

Plus: Lizzo, Steve Lacy and ITZY debut in top 10.

Drake took a moment to acknowledge Bad Bunny for breaking his own all-time record for biggest streaming year for any artist in Spotify history.

Bad Bunny's 'Un Verano Sin Ti' maintains its dominance on the Billboard 200, taking No. 1 for a third consecutive week and fifth time overall.

Plus: Brent Faiyaz and Aespa debut in the top five.

Billboard Explains: Why Concerts Tickets Are So Expensive

Can you name the top touring artist right now? Given the high demand to see the Puerto Rican superstar, Bad Bunny concerts ticket prices surged through the industry standard dynamic pricing. So what is dynamic pricing? Who does your ticket money actually go to? What’s with all those fees? This is Billboard Explains why are […]

Interscope Geffen A&M remains the No. 1 label halfway through 2022, while Atlantic leads the charge in current market share.

BTS announce they’re releasing a slate of projects on Disney+, Nicki Minaj pushes a fan at a meet and greet, new music videos from Harry Styles, Muni Long and Cardi B are coming soon and Bad Bunny will play in the MLB All star game.

Other artists taking the field include Quavo, JoJo Siwa, Anthony Ramos, among others.

Bad Bunny’s ‘Un Verano Sin Ti’ captures a fourth nonconsecutive week at No. 1 on the Billboard 200 albums chart (dated July 16). The set holds at No. 1, notching its first set of back-to-back weeks in the lead.

Plus: Shinedown scores fifth top 10 with debut of “Planet Zero.”

Planning to Go to Bad Bunny’s Puerto Rico Shows? Here’s What You Need to Know

Tickets to his Un Verano Sin Ti shows will only be sold in person at the venue.

The Art of Stillz: The Elusive Creative Visionary Talks About His Most Memorable Videos

Known for his work with Bad Bunny, Lil Nas X, and Rosalia, Stillz is one of the most in-demand video directors in the game

Bad Bunny Back at No. 1 on Billboard 200 With ‘Un Verano Sin Ti’ | Billboard News

The latest releases from Luke Combs, Chris Brown, NAYEON and Conan Gray arrive within the top 10.

LAS QUE NO IBAN A SALIR

No Me Conoce (Remix)