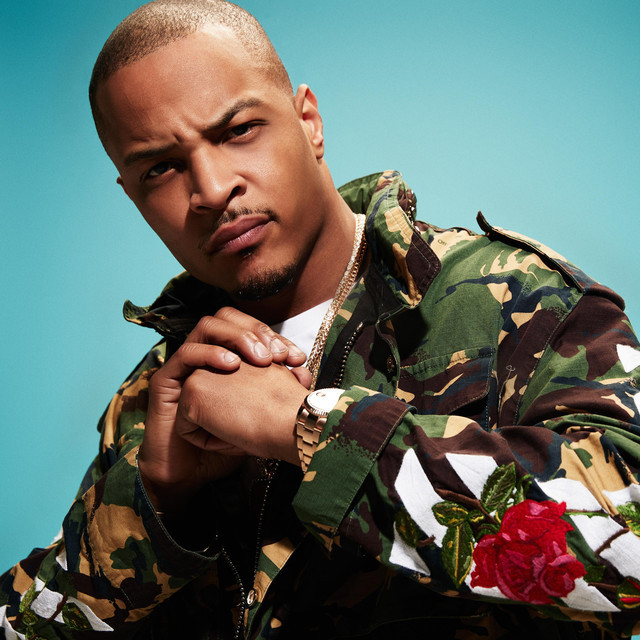 Clifford Joseph Harris Jr. (born September 25, 1980), better known by the stage names T.I. and Tip (often stylized as TIP or T.I.P.), is an American rapper, record executive, businessman and actor. Born and raised in Atlanta, Georgia, Harris is one of the highest selling hip-hop artists of all time and is also known as one of the pioneers of the hip hop subgenre trap music, along with fellow Atlanta-based rappers Jeezy and Gucci Mane. Harris signed his first major-label record deal in 1999 with Arista Records subsidiary LaFace. In 2001, he released I'm Serious, his solo debut and only album with the label, as well as formed the southern hip hop group P$C. Upon being dropped from Arista, Harris signed to Atlantic and soon co-founded his own label imprint, Grand Hustle Records, which he launched in 2002.Harris, a three time Grammy Award winner, has released 11 studio albums, with seven of them reaching the top five of the US Billboard 200 chart. During his career, Harris has also released several highly successful singles, including Billboard Hot 100 number-one hits "Whatever You Like" and "Live Your Life" (featuring Rihanna), the latter replaced the former atop the chart and helped Harris join a select group of artists to replace themselves at number one and simultaneously occupy the top two positions. Harris began to gain major recognition in 2003 following his first high-profile feature on fellow Atlanta-based rapper Bone Crusher's single "Never Scared". Harris earned more prominence with the release of Trap Muzik (2003), which included the Top 40 songs "Rubber Band Man" and "Let's Get Away" (featuring Jazze Pha). The following year, Harris appeared on Destiny's Child's international hit "Soldier" (alongside Lil Wayne), and capitalized on it with the release of his Urban Legend (2004) album. His subsequent albums, King and T.I. vs. T.I.P., generated high record sales and were supported by popular singles, such as "What You Know" and "Big Shit Poppin' (Do It)", respectively.

Harris' sixth album, Paper Trail (2008), became his most successful project, with the album being certified gold for first-week sales of over 500,000 copies in the United States, additionally making it his third consecutive number one album. In 2013, Harris was featured on Robin Thicke's single "Blurred Lines" (alongside Pharrell Williams), which peaked at number one on several major music charts. In November 2013, Harris announced that he had signed with Columbia Records after his 10-year contract with Atlantic came to an end. He released his Columbia debut Paperwork, in October 2014. In February 2016, Harris signed a distribution deal with Roc Nation and another deal with Epic Records in September 2018. The former served as a means to release his political Us or Else EP series, while the latter released his long-delayed tenth album Dime Trap in October of that year.

Harris has served two terms in county jail, twice for probation violations and a federal prison bid for a U.S. federal weapons charge. While serving 11 months in prison, he released his seventh studio album No Mercy (2010). Harris branched out into entrepreneurship with his label, Grand Hustle Records, which he co-founded in 2003 with longtime business partner Jason Geter. Prominent industry acts have been signed to T.I. through the label, including Travis Scott, B.o.B, and Iggy Azalea. Harris has also had a successful acting career, starring in the films ATL, Takers, Get Hard, Identity Thief, and in the Marvel Cinematic Universe films Ant-Man and its sequel. He is also a published author of two novels, Power & Beauty (2011) and Trouble & Triumph (2012), both of which were released to moderate success. Harris has also starred in the American reality television series T.I.'s Road to Redemption, T.I. & Tiny: The Family Hustle, and The Grand Hustle. In 2009, Billboard ranked him as the 27th best artist of the 2000s decade.

T.I. called out VH1 for suspending production on 'T.I. & Tiny: Friends & Family Hustle' over a year ago amid a litany of sexual abuse allegations.

Pharrell Brings Clipse, Justin Timberlake to the Stage at Something in the Water Festival

Watch Clipse Reunite at Pharrell Williams’ Something in the Water Fest

T.I.’s Son King Gets Into Altercation With Waffle House Employees Over Messed Up Order

The recent high school graduate was filming himself on IG Live threatening Waffle House restaurant workers after they allegedly messed up his order.

The hip-hop heavyweight took to Instagram before the weekend hit to salute his 17-year-old son King Harris for graduating high school with honors.

T.I. Questions Why KKK Hasn't Been Hit With RICO Case Amid Young Thug and Gunna's Indictment

As the controversy surrounding the recently announced RICO indictment grows, T.I. is wondering why this approach isn't being used toward the hate group.

T.I. called out people for what he described as “bullying” Kevin Samuels, a controversial dating and relationship advice YouTuber who died earlier this month.

T.I. Speaks on Being Booed at Barclays Center Comedy Show

The rapper took the stage at the April Fools Comedy Jam at Brooklyn’s Barclays Center on Saturday, where his comedic work was not welcomed altogether warmly.

Comedian Lauren Knight on Feud with T.I.: 'The Beef is Squashed'

Comedian Lauren Knight told TMZ that the 'beef' between her and T.I. is 'squashed. The pair got into a heated exchange when she was doing stand-up at a club.

T.I. Gets Booed During Comedy Show at the Barclays Center in Brooklyn

April Fools Comedy Jam returns to the Barclays Center in Brooklyn. T.I. was scheduled to perform and do comedy alongside Rip Micheals, Nick Cannon, and more.

T.I. and comedian Lauren Knight came together on Instagram Live after footage of their verbal clash during Knight’s stand-up show went viral.

In a new interview, stand-up comic Godfrey clarified the situation with T.I. after the two traded comments over a comedy set, saying it was a misunderstanding.

Students at Wiley College will help produce a film project bankrolled with a $300,000 grant from The Propel Center.

The track comes after news broke that neither the rapper nor his wife will face charges stemming from a 2005 incident involving a woman who alleged that the couple drugged and sexually assaulted her in Los Angeles.

T.I. and Tiny will not be charged over 2005 sexual assault allegation

Los Angeles prosecutors have declined to file charges as the alleged incident falls out of the statute of limitations The post T.I. and Tiny will not be charged over 2005 sexual assault allegation appeared first on NME.

On Thursday (Sept. 16), Billboard learned that T.I. and his wife Tiny Harris will not face charges stemming from a 2005 incident involving a woman claiming that the couple allegedly drugged and sexually assaulted her in Los Angeles.…

T.I. and Tiny Will Not Be Charged for 2005 Sexual Assault and Drugging Allegations

T.I. arrested in Amsterdam for being on his phone while cycling

He says a policeman ran into him on the street The post T.I. arrested in Amsterdam for being on his phone while cycling appeared first on NME.

DaBaby responds after comments made during Rolling Loud criticised as homophobic

T.I. also defended the rapper in a lengthy video on social media The post DaBaby responds after comments made during Rolling Loud criticised as homophobic appeared first on NME.

T.I. Defends DaBaby’s Homophobic Rolling Loud Rant: ‘Ain’t Got to Be No Hate, It’s All Honesty’

Following DaBaby's homophobic outburst during his set Sunday night at Rolling Loud Miami, rapper T.I. is jumping in to defend his fellow rapper's point of view.

T.I. responds to sexual assault allegations in ‘What It’s Come To’ video

T.I. responds to multiple sexual abuse allegations against him and his wife Tiny in his music video for "What It's Come To."

The rapper released 'What It's Comes To' overnight The post T.I. appears to address sexual misconduct allegations in new song appeared first on NME.

What It’s Come To

Us Or Else: Letter To The System

About the Money (feat. Young Thug)

Trouble Man: Heavy is the Head

Down With The King: Gangsta Grillz