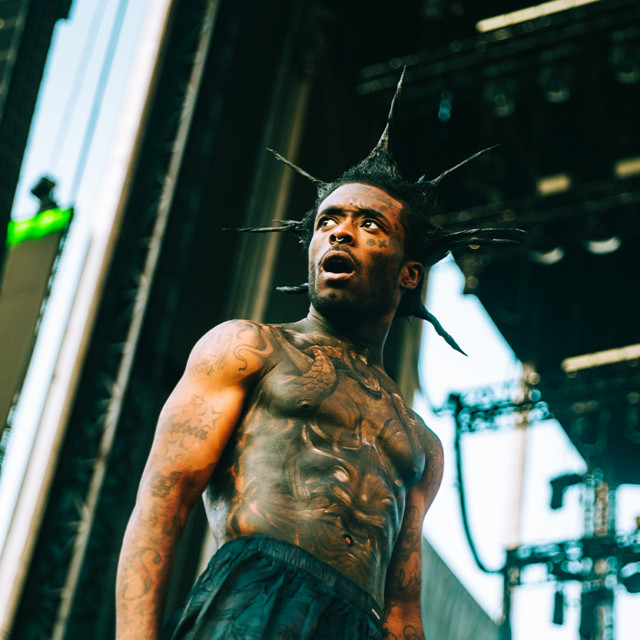 Symere Bysil Woods ( sy-MEER; born July 31, 1995), known professionally as Lil Uzi Vert, is an American rapper and singer. Woods is characterized by their facial tattoos, facial piercings, eccentric hairstyles and androgynous fashion, imagery built on a melodic emo approach to trap. Born and raised in Philadelphia, Lil Uzi Vert gained initial recognition following the release of the commercial mixtape Luv Is Rage (2015), which led to a recording contract with Atlantic Records, to whom they signed under DJ Drama's Generation Now imprint.Lil Uzi Vert attracted mainstream attention following the release of their debut single "Money Longer" in 2016. The song would act as the lead single for the subsequent mixtape Lil Uzi Vert vs. the World (2016), which also contained the song "You Was Right". After releasing two additional mixtapes in 2016 and 2017, including one in collaboration with Gucci Mane, Lil Uzi Vert was featured on the Billboard Hot 100 chart-topping Migos' single "Bad and Boujee". They later secured their first top ten single with "XO Tour Llif3", which won the MTV Video Music Award for Song of Summer.

"XO Tour Llif3" acted as the lead single to Lil Uzi Vert's debut studio album Luv Is Rage 2 (2017), which debuted at number one on the Billboard 200, and was certified double platinum by the Recording Industry Association of America (RIAA). At the 2018 Grammy Awards, Lil Uzi Vert was nominated for Best New Artist. Their second studio album, Eternal Atake (2020), was among the most anticipated albums in contemporary trap and rap when it was finally released following years' worth of delays. Eternal Atake, much like Luv Is Rage 2, debuted at number one on the Billboard 200.

Lil Uzi Vert is the latest artist to be welcomed to the Jazzy's World TV YouTube channel, which last month released a discussion with Kendrick Lamar.

Kodak Black hinted at having upcoming projects with French Montana and Lil Uzi Vert on the way, one of which French appeared to confirm on Twitter.

The City Girls member looked back on some of her and Uzi's shared memories in commemoration of the 'Eternal Atake' artist's birthday on Sunday.

Uzi Vert sent the message Thursday, less than two weeks after Kodak was charged with possessing a controlled substance without a prescription.

Lil Uzi Vert has dropped their 'Red & White' EP after teasing the project on social media. The EP features the previously released songs “Flex Up” and “I Know.”

Lil Uzi Vert has come though with another song. The track, which was produced by Maaly Raw, is titled "Flex Up." Uzi previously dropped "I Know."

Uzi fans are currently checking around the clock for more news regarding the impending release of the new EP 'Red & White,' which should be out soon.

In a quiet change to their Instagram bio, the 26-year-old rapper let fans know how they would like to be identified going forward.

The rapper is yet to share a statement or speak publicly about the change The post Lil Uzi Vert now goes by they/them pronouns appeared first on NME.

Yo Gotti returned to FedExForum for the eighth edition of his Birthday Bash concert that featured performances by Boosie Badazz, Lil Uzi Vert, and Lil Durk.

Lil Uzi Vert has surprised fans with “Space Cadet,” a new track that the rapper shared on his SoundCloud page during the early hours of Saturday.

Following a three-year hiatus, Yo Gotti's annual music event returns to the Fedex Forum in Memphis. The show will include appearances by CMG artists.

From Kendrick Lamar's crown of thorns made by Tiffany & Co. to Drake's new iced out owl pendants, here were the biggest celeb jewelry purchases of June 2022.

“I am sadly that chick that got her head smashed in by the phone" The post Fan left with bloody head as Lil Uzi Vert launches phone into crowd appeared first on NME.

Lil Uzi Vert hurled a cell phone into the air mid-performance at London's Wireless Festival, allegedly injuring a TikTok-using fan in the process.

Danny Brown, 21 Savage, Shenseea, BabyTron, Lil Uzi Vert, and others are on the bill for the Queens festival

Smoke My Dope (with Steve Aoki & Lil Uzi Vert) (From Bright: The Album)

Lil Uzi Vert vs. The World