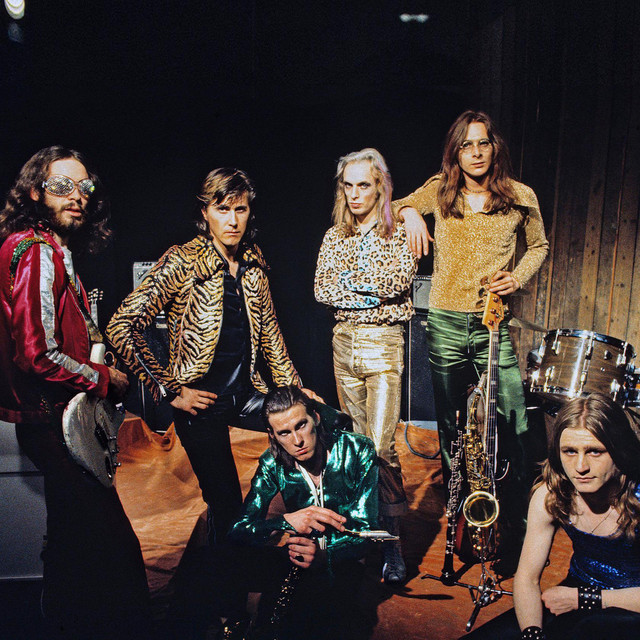 Roxy Music are an English rock band formed in 1970 by Bryan Ferry—who became the band's lead singer and main songwriter—and bass guitarist Graham Simpson. The other longtime members were Phil Manzanera (guitar), Andy Mackay (saxophone and oboe), and Paul Thompson (drums and percussion). Other members included Brian Eno (synthesizer and 'treatments'), Eddie Jobson (synthesizer and violin), and John Gustafson (bass). Although the band took a break from group activities in 1976 and again in 1983, they reunited for a concert tour in 2001, and toured together intermittently over the next few years. Ferry frequently enlisted band members as session musicians for his solo releases.

Roxy Music became a successful act in Europe and Australia during the 1970s. This success began with their self-titled debut album in 1972. The band pioneered more musically sophisticated elements of glam rock while significantly influencing early English punk music, and provided a model for many new wave acts while innovating elements of electronic composition. The group also conveyed their distinctive brand of visual and musical sophistication with their focus on glamorous fashions. Ferry and co-founding member Eno have had influential solo careers. Eno became one of the most significant British record producers of the late 20th century. Rolling Stone originally ranked Roxy Music No. 98 on their greatest artists list ("The Immortals – The 100 Greatest Artists of All Time"), but dropped the group from the list when they updated it in 2011.Roxy Music's final studio album was Avalon (1982), which was certified Platinum in the United States. In 2005, the band began recording what would have become their ninth studio album—and their first album with Eno since 1973 (he wrote two songs for it and also played keyboards). However, Ferry eventually announced that the material from these sessions would instead be released as a Ferry solo album, with Eno playing on "a couple of tracks", and that he believed the group would never again produce a record as Roxy Music. The album was released in 2010 as the Ferry solo album Olympia. It featured contributions from Eno, Manzanera, and Mackay (amongst many other session players).

In 2011, Roxy Music played a series of 40th-anniversary shows, but went inactive as a performing entity following the concerts. In 2019, Roxy Music were inducted into the Rock and Roll Hall of Fame.In 2022, Roxy Music reformed for a tour to mark the 50th anniversary of their first album.

The restored and remastered LP will arrive ahead of the group's first UK shows in over a decade The post Roxy Music to release ‘Best Of’ album on vinyl for first time appeared first on NME.

Bryan Ferry and Co. opened for Jethro Tull at Madison Square Garden in 1972, and they're finally returning as headliners in September

St. Vincent will join the glam legends for a host of September U.S. dates, with three UK shows lined up the following month

Roxy Music announce 2022 UK and North American tour, their first gigs in over a decade

The band are celebrating the 50th anniversary of their debut album this year The post Roxy Music announce 2022 UK and North American tour, their first gigs in over a decade appeared first on NME.

The series begins in April with their self-titled debut and follow-up 'For Your Pleasure' The post Roxy Music to reissue all eight studio albums on vinyl across 2022 appeared first on NME.

Recorded for the Apple TV+ series The Shrink Next Door

Love Is The Drug / Avalon