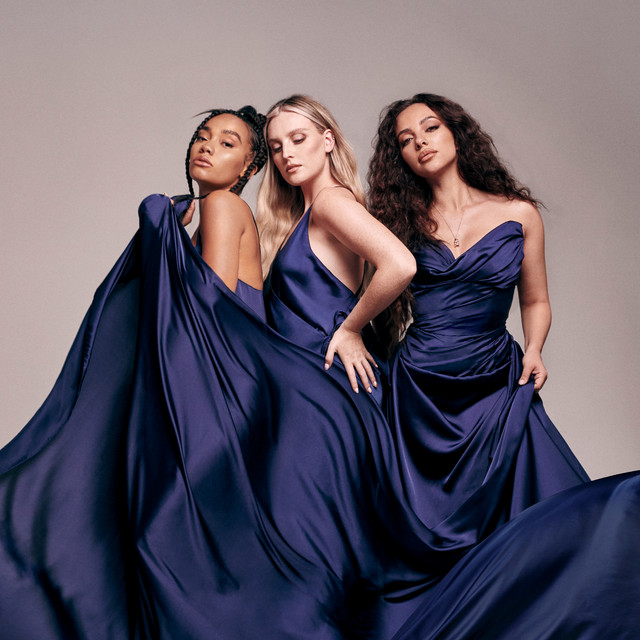 Little Mix are a British girl group, consisting of group members Jade Thirlwall, Perrie Edwards, Leigh-Anne Pinnock, and previously Jesy Nelson until her departure from the group in December 2020. The group rose to prominence in the 2010's, after becoming the first group to win the eighth series of The X Factor UK. The group's music style is of pop, R&B and dance-pop, with influences from other genres including tropical house, latin pop, and electronic music. Their lyrics are often focused around feminism, gender equality, LGBTQ+ rights, body positivity, and sexism.

Little Mix are one of The X Factor's most successful acts from the original UK version. The group have had five number-one singles on the UK Singles Chart and achieved the most number-one singles for a winning act from the show. In 2021, Little Mix became the first girl group to spend a 100 combined weeks inside the top ten of the UK Singles Chart. The group have released six studio albums, five of which have been certified Platinum by the British Phonographic Industry. In 2018, they became the first girl group to have five consecutive top-five studio albums in the United Kingdom.

Little Mix have released six studio albums and one compilation album, DNA (2012), Salute (2013), Get Weird (2015), Glory Days (2016), LM5 (2018), Confetti (2020), and Between Us (2021). Their debut album DNA, is the highest-charting entry on the US Billboard 200, for a debut album by a British girl group. Glory Days became Little Mix first number-one album on the UK Albums Chart. The album spent five weeks at number one, the most for a girl group since Spice Girls' debut album. It became the fastest-selling number-one album by a girl group in fifteen years and achieved the highest first-week UK album sales for a girl group since Spiceworld. Glory Days is the longest charting girl group album inside the top 40 on the UK Albums Chart. In 2021, Between Us was named as one of Sony Music's top ten best-selling albums globally of that year.

Little Mix are one of Britain's biggest selling acts and one of the best-selling girl groups of all time, with estimated sales from 50 million worldwide. The group are known for their strong vocals and also signature harmonies. Little Mix have been named as one of the greatest girl groups of all time and the biggest girl group of the 2010s. In 2018, Forbes, named them as one of the most influential acts in Europe. They are listed by Debrett's as one of the most influential people in the UK with a net worth of £60 million. In 2021, Little Mix became the first female group to win the Brit Award for British Group. Their accolades include two Brit Awards, seven MTV Europe Music Awards (the most wins for Best UK & Ireland Act), two Japanese Gold Disc Awards, four Glamour Awards, a iHeartRadio Music Award and three Guinness World Record. In 2022, the group went on indefinite hiatus, allowing its members to pursue solo projects.

Boys World Shakes Ass, Brings Sass, and Heals From a Bad Romance on ‘So What’

With Little Mix on hiatus and Fifth Harmony long gone, this girl group is on the ascent to becoming pop's next big thing

"Last night the love of my life got down on one knee and I said… YES!" Edwards wrote.

The group are set to take a "break" from the band following their 'Confetti' tour The post Watch Little Mix give multiple songs their live debut as they kick off farewell tour appeared first on NME.

The group are taking a break after their upcoming Confetti tour The post Little Mix’s Jade Thirlwal to go solo, signs global record deal with RCA appeared first on NME.

The British pop star is embarking on a solo run.

Little Mix Announce ‘Break’ to Work on Other Projects, Promise That Group Is ‘Forever’

After next spring's Confetti tour they are taking a temporary powder.

The group have been together for a decade The post Little Mix announce they’ll be taking “a little break” after next year’s tour appeared first on NME.

Just 10 chart sales separate Taylor Swift's "Red (Taylor's Version)" and Little Mix’ "Between Us" at the pinnacle of the midweek U.K. albums chart.

The band have also praised K-pop and the culture around it The post Perrie Edwards wants Little Mix to make a pop punk record appeared first on NME.

BTS' "Butter" held steady at No. 1 on both the 24-hour and seven-day versions of Billboard's Hot Trending Songs chart, powered by Twitter, on Friday morning (Nov. 12).

How to Become a Little Mix Stan, According to Little Mix

Leigh-Anne, Jade and Perrie look back on their catalog and reflect on why 2021 has been an "amazing year for all of us"

The track was co-written with Little Mix’s Jade Thirwell

Adele and Little Mix are the only two homegrown artists in the top 10 The post Pink revealed as the most-played female artist in the UK this century appeared first on NME.

Nicki Minaj made it loud and clear that she stands by Jesy Nelson after she's faced accusations of Blackfishing.

Jesy Nelson's debut as a solo artist "Boyz" finally arrived last week, and the former Little Mix member is opening up about what it was like to work with Nicki Minaj.

With Little Mix in the rearview, Jesy Nelson launches her solo career with some help from the Queen of Rap.

Nelson, formerly of Little Mix, gets an assist from Minaj on her debut single as a solo artist

Jesy Nelson shared in an interview with 'Glamour UK' that she hasn't spoke to her Little Mix bandmates since leaving the group.

"He’s not even the most successful performer in his family" The post Little Mix’s Jade Thirlwall hits back at Noel Gallagher’s BRIT Awards jibe appeared first on NME.

10 Cool New Pop Songs to Get You Through the Week: FINNEAS, Little Mix, Rosalia & Tokischa

10 Cool New Pop Songs to help you get through this week.

The song will appear on the group's upcoming new album

Little Mix gave their fans "Love (Sweet Love)" on Friday (Sept. 3) in the form of a new single.

Between Us (Deluxe Version)

Between Us (The Mixers Edition)

Between Us (The Experience)

No Time For Tears (VIP Remix)

No Time For Tears (Acoustic)

No Time For Tears (HUGEL Remix)

No Time For Tears

Not a Pop Song

One I've Been Missing - EP

Only You (with Cheat Codes) [Wide Boys Remix]

Only You (Wide Boys Remix)

Only You (with Cheat Codes) [Acoustic]