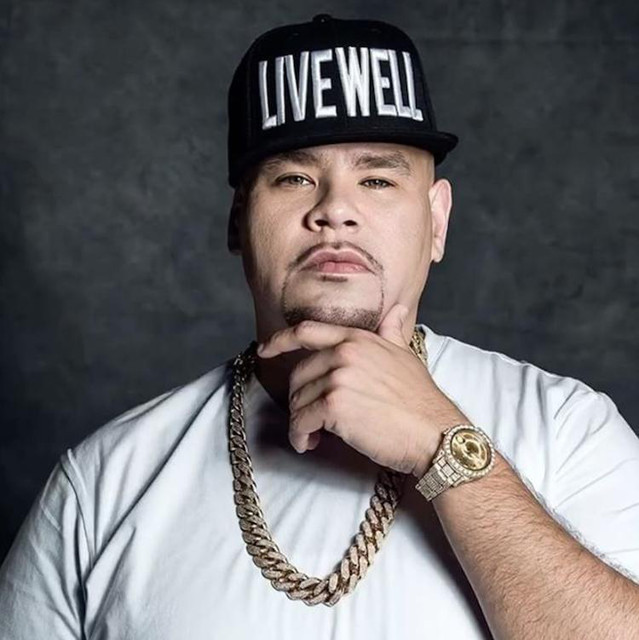 Joseph Antonio Cartagena (born August 19, 1970), better known by his stage name Fat Joe, is an American rapper from New York City. He began his music career as a member of hip hop group Diggin' in the Crates Crew (D.I.T.C.), then forged a solo career and set up his own label, Terror Squad, to which he signed Big Pun, Remy Ma, Tony Sunshine, Cuban Link, Armageddon, Prospect, Triple Seis, and a then-unknown DJ Khaled, as well as discover producers Cool & Dre.

Fat Joe's debut solo album, Represent, was released in 1993 and spawned the single "Flow Joe", which reached number one on the Billboard Hot Rap Songs chart. His most commercially successful album to date was Jealous Ones Still Envy (J.O.S.E.) (2001); it was certified platinum by the RIAA and internationally certified silver by the BPI, as well as reaching the top 100 on multiple music charts.

Fat Joe has appeared in several films, including Scary Movie 3 and Happy Feet, as well as Spike Lee's Netflix series She's Gotta Have It.

In 2018 he began hosting a podcast on Tidal, Coca Vision, where he discusses music, friendships, and pop culture with various guests. His album Family Ties was released in December 2019.

Joe called Irv a "sucker" after he spoke about his alleged relationship with Ashanti 20 years ago. "He’s not my friend. I was fooled," Irv said.

Fat Joe called Irv Gotti a "sucker" over remarks he made about his relationship with Ashanti while he was a guest on the 'Drink Champs' podcast.

Fat Joe Discusses Being Jumped By His Best Friend as a Kid: 'That Was the Birth of Joey Crack'

In a clip from A&E's 'Origins of Hip Hop' series, Fat Joe talked about how being bullied as a kid and getting jumped by his best friend impacted him.

Fat Joe was asked to share his thoughts on 6ix9ine during a recent sit down with Math Hoffa, and held nothing back as he eviscerated the New York rapper.

The event returned to D.C. on Saturday night for the first time since 2019. Celebrities like Kim Kardashian, Pete Davidson, and Fat Joe were in attendance.

Flee Lord and Mephux are teaming up to release 'Pray for the Evil III' featuring Conway the Machine, Fat Joe, Roc Marciano, and more next week.

The pair of rap dignitaries recall their fondest memories of the self-proclaimed Drama King.

Though he's previously hinted at retirement, the Terror Squad rapper says he has no intentions of stepping away from the game: "I’m really good at this sh*t."

Jay-Z, Diddy, and Fat Joe all stopped by to celebrate with DJ Khaled as he was honored with his very own star on the Hollywood Walk of Fame.

"We the best. It’s not just me, it's we" The post DJ Khaled receives star on Hollywood Walk of Fame with Jay-Z, Diddy and Fat Joe in attendance appeared first on NME.

During an appearance on Fat Joe's Instagram Live this week, The Game denied the assumption that 50 Cent put him on in the early stages of his career.

Fat Joe Responds to Question on If Will Smith Slap Makes Minorities Look Bad, Says Will 'Is Like the Best We Got'

With the aftershocks of Will Smith’s infamous slap on Chris Rock at the Oscars still reverberating, Fat Joe gave his take on a specific question posed by TMZ.

"I overcame significant adversity, but I’m excited to be in position to share my story and inspire others through my journey," he said.

Roc Lit 101, the publishing arm of Roc Nation, has announced Fat Joe's upcoming first memoir, 'The Book of Jose,' which is due on November 1.

The rapper's accuser will appeal the dismissal of his copyright case seeking co-ownership “All the Way Up.”

"It’s 10 degrees in the Bronx today! WE NEED YOUR HELP," the star wrote.

Fat Joe launches new burger range in the US

"I'm here to destroy your New Year" The post Fat Joe launches new burger range in the US appeared first on NME.

A federal judge ruled that a jilted co-author signed away his rights in return for a $5,000 payment made by Fat Joe during a meeting at a Miami IHOP.

The rapper thinks DaBaby is a "super real one" who "lives what he raps about" The post Fat Joe responds to criticism for calling DaBaby modern day 2Pac appeared first on NME.

All The Way Up (Remix) (feat. French Montana & Infared) - Single

All The Way Up (feat. French Montana & Infared) - Single

Another Round (feat. Chris Brown)

The Elephant In The Room

So Much More (Radio Version)

All I Need (Online Music)