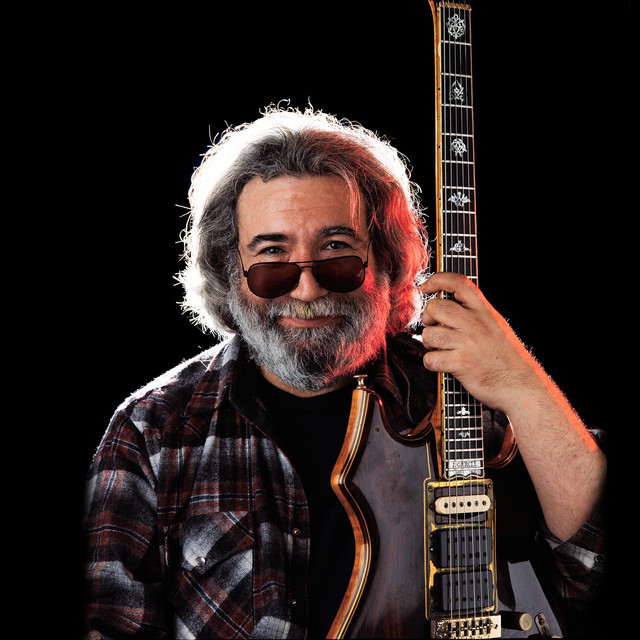 Jerome John Garcia (August 1, 1942 – August 9, 1995) was an American musician, best known for being a principal songwriter, the lead guitarist and a vocalist with the rock band Grateful Dead, of which he was a founding member and which came to prominence during the counterculture of the 1960s. Although he disavowed the role, Garcia was viewed by many as the leader of the band. He was inducted into the Rock and Roll Hall of Fame in 1994 as a member of the Grateful Dead.

As one of its founders, Garcia performed with the Grateful Dead for their entire 30-year career (1965–1995). Garcia also founded and participated in a variety of side projects, including the Saunders–Garcia Band (with longtime friend Merl Saunders), the Jerry Garcia Band, Old & In the Way, the Garcia/Grisman and Garcia/Kahn acoustic duos, Legion of Mary, and New Riders of the Purple Sage (which he co-founded with John Dawson and David Nelson). He also released several solo albums, and contributed to a number of albums by other artists over the years as a session musician. He was well known for his distinctive guitar playing, and was ranked 13th in Rolling Stone's "100 Greatest Guitarists of All Time" cover story in 2003. In the 2015 version of the list he was ranked at #46.Garcia was also renowned for his musical and technical ability, particularly his ability to play a variety of instruments and sustain long improvisations with the Grateful Dead. Garcia believed that improvisation took stress away from his playing and allowed him to make spur of the moment decisions that he would not have made intentionally. In an interview with Rolling Stone, Garcia noted that "my own preferences are for improvisation, for making it up as I go along. The idea of picking, of eliminating possibilities by deciding, that's difficult for me". Originating from the days of the "acid tests", these improvisations were a form of exploration rather than playing a song already written.Later in life, Garcia struggled with diabetes and in 1986, went into a diabetic coma that nearly cost him his life. Although his overall health improved somewhat after that, he continued to struggle with obesity, smoking, and longstanding heroin and cocaine addictions. He was staying in a California drug rehabilitation facility when he died of a heart attack on August 9, 1995, at the age of 53.

Hill previously worked with the director on 'The Wolf of Wall Street.'

The Dead’s Bob Weir, Phil Lesh, Mickey Hart, and Bill Kreutzmann are among the executive producers of the Apple Original Film

A prolific live performer and session musician, Tutt also worked with Billy Joel, Neil Diamond, Jerry Garcia, and many others in his six-decade career

Ronnie Tutt, Drummer for Elvis Presley and the Jerry Garcia Band, Dead at 83

The collection includes 20 digital art pieces by the Grateful Dead frontman, including three rare works he is believed to have created in his final days.

Valdez in the Country (Live)

The Harder They Come (Live)

You Can Leave Your Hat On (Live)

I Was Made to Love Her (Live)

When I Paint My Masterpiece (Live)

Legend of the Johnson Boys (Live)

All My Trials (Live)

Who Will Sing For Me? (Live)

Been All Around This World

All for Life (Live)

Side Trips: Volume One (Live)

Not For Kids Only

Run for the Roses (Expanded)

New Riders of the Purple Sage