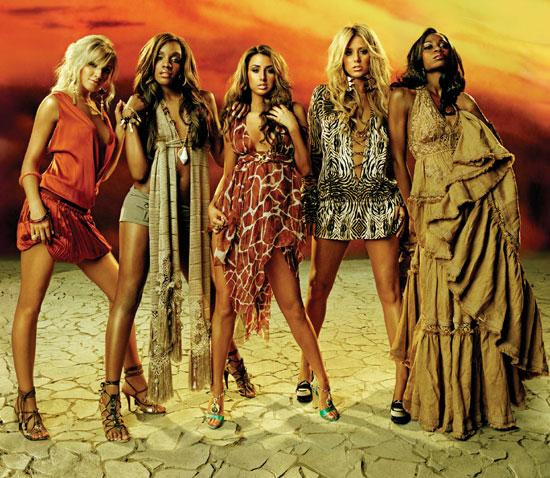 Danity Kane is an American girl group whose current members at the time of their hiatus were Aubrey O'Day, Dawn Richard and Shannon Bex. The group originally had five members, but Wanita "D. Woods" Woodgett left the group in 2008 and Aundrea Fimbres left in 2014. Formed on the third iteration of MTV's Making the Band reality television series in 2005, they signed to Bad Boy Records by Diddy.

Danity Kane's self-titled debut studio album was released in 2006 and achieved success in the United States, shipping a million copies domestically, while spawning two singles with top 10 single "Show Stopper" and the ballad "Ride for You". Their second studio album, Welcome to the Dollhouse, was released in 2008 following the release of their second top 10 single "Damaged". The band became the first female group in Billboard history to debut their first two albums at the top of the charts.Despite initial success, tension in the group led to a meeting with Diddy where, in the October 2008 finale episode of Making the Band 4, he removed O'Day and Woodgett from the group. The three remaining members of the group carried on with previously scheduled promotional events before officially disbanding in early 2009. All group members were ultimately released from their contracts with Bad Boy Records later within the year. In 2013, four of the five group members (O'Day, Bex, Richard and Fimbres) made an official announcement regarding their reunion at the 2013 MTV Video Music Awards; however, on May 16, 2014, the first night of their reunion tour in San Francisco, Fimbres announced her departure from the group due to wanting to start her family, leaving O'Day, Bex and Richard to continue as a trio.On August 8, 2014, after a fight in the recording studio between members O'Day and Richard, O'Day and Bex announced publicly that Danity Kane had disbanded again. Although they disbanded, their third studio album, DK3, was released in October 2014. Following the second disbandment, Richard continued to release solo music while O'Day and Bex formed the duo Dumblonde. In August 2018, the trio announced that they would reunite and tour together. O'Day and Richard released new music as a duo under Danity Kane in 2020. Since March 2020, the group has been on an indefinite hiatus.

Welcome to the Dollhouse