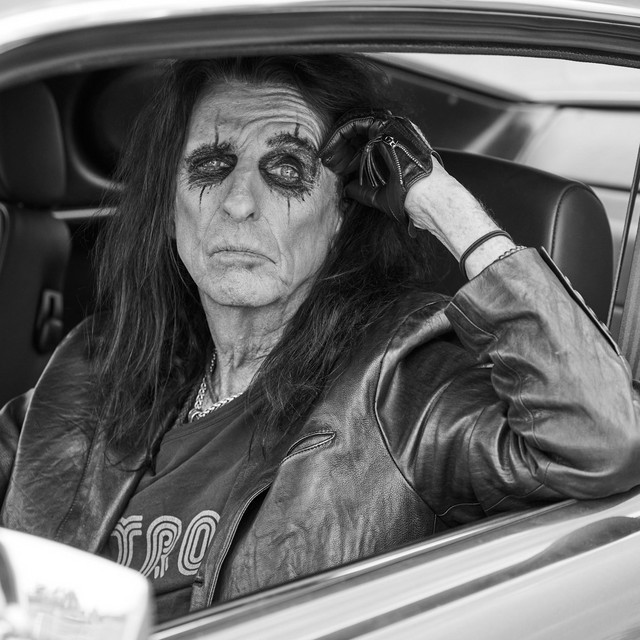 Alice Cooper (born Vincent Damon Furnier, February 4, 1948) is an American rock singer whose career spans over 54 years. With a raspy voice and a stage show that features numerous props and stage illusions, including pyrotechnics, guillotines, electric chairs, fake blood, reptiles, baby dolls, and dueling swords, Cooper is considered by music journalists and peers to be "The Godfather of Shock Rock". He has drawn equally from horror films, vaudeville, and garage rock to pioneer a macabre and theatrical brand of rock designed to shock audiences.Originating in Phoenix, Arizona, in 1964, "Alice Cooper" was originally a band with roots extending back to a band called The Earwigs, consisting of Furnier on vocals and harmonica, Glen Buxton on lead guitar, and Dennis Dunaway on bass guitar and background vocals. By 1966, Michael Bruce on rhythm guitar joined the three and Neal Smith was added on drums in 1967. The five named the band "Alice Cooper", with Furnier eventually adopting the latter as his stage pseudonym. They released their 1969 debut album with limited chart success. Breaking out with the 1970 single "I'm Eighteen" and the third album Love It to Death, the band reached their commercial peak in 1973 with their sixth studio album, Billion Dollar Babies. After the band broke up, Furnier legally changed his name to Alice Cooper and began a solo career with the 1975 concept album Welcome to My Nightmare. Over his career, Cooper has sold well over 50 million records.Cooper has experimented with a number of musical styles, including art rock, hard rock, heavy metal, new wave, glam metal, and industrial rock. He helped to shape the sound and look of heavy metal, and has been described as the artist who "first introduced horror imagery to rock and roll, and whose stagecraft and showmanship have permanently transformed the genre". He is also known for his wit offstage, with The Rolling Stone Album Guide calling him the world's most "beloved heavy metal entertainer". Away from music, Cooper is a film actor, a golfing celebrity, a restaurateur, and, since 2004, a radio DJ with his classic rock show Nights with Alice Cooper.

Do Steve Carell and Alice Cooper Really Look Alike? Here’s What They Think

Creeper to join Alice Cooper and The Cult on tour

"It is a dream come true for a band like ours to tour with our heroes" The post Creeper to join Alice Cooper and The Cult on tour appeared first on NME.

"Rock 'n' roll should be anti-political," he said, as well as discussing Ted Nugent The post Alice Cooper says he doesn’t think “rock ‘n’ roll and politics belong in the same bed together” appeared first on NME.

"They're two entirely different kinds of albums, but they're Alice Cooper" The post Alice Cooper at work on two new albums that are “pure rock and roll” appeared first on NME.

Cooper says he foresaw the pandemic outlasting any government assistance his crew would be entitled to The post Alice Cooper set funds aside for his touring crew when COVID-19 first broke out appeared first on NME.

Culminating with a headline set at next year's Monsters of Rock cruise The post Alice Cooper announces US tour for winter 2022 appeared first on NME.

Alice Cooper opens up on battle with alcohol addiction: “I loved my life, but I hated my life.”

After Nirvana broke, the rock world embraced a darker, mopier sound. See how everyone from Mötley Crüe to Alice Cooper tried their best to fit in with the times

"They didn't waste a cover," Cooper says of the magazine in latest docuseries episode

‘Icon: Music Through the Lens’ Docuseries to Explore History of Music Photography

Six-part series will boast interviews with an array of acclaimed photographers, plus artists like Josh Homme, Lars Ulrich, and Alice Cooper

The singer recently found the painting in his garage, after forgetting he owned it for years The post Alice Cooper is selling his rare Andy Warhol painting appeared first on NME.

An Andy Warhol canvas found years ago in the garage of rocker Alice Cooper could become the highest selling artwork ever in Arizona.

The event celebrates its 10th anniversary next year The post Alice Cooper to headline ‘Monsters Of Rock’ cruise 2022 appeared first on NME.

Alice Cooper on contracting COVID-19: “It knocked me out for three weeks”

The veteran rocker has urged everyone to get vaccinated The post Alice Cooper on contracting COVID-19: “It knocked me out for three weeks” appeared first on NME.

Who knew 'Poison' could be so soothing? The post Lullaby album of Alice Cooper’s music has been released for infants appeared first on NME.

The livestream will be free and will include a support set from the winner of a battle of the bands-style contest The post Evanescence to hold livestream concert hosted by Alice Cooper appeared first on NME.

It also involved a vibrating bed which Hendrix referred to as "a spaceship" The post Alice Cooper reveals his first experience with drugs was with Jimi Hendrix appeared first on NME.

"When I go up on stage with the Foo Fighters, they nail my songs — they do 'em exactly the way they should be done" The post Alice Cooper says he’d love to front Foo Fighters “if they ever needed a really sick lead singer” appeared first on NME.

He said he never saw Bowie as competition but instead "encouraged" him The post Alice Cooper says his theatrical gigs opened a “huge door for Bowie” appeared first on NME.

"He’ll say, ‘Vinnie, Vinnie, how long has it been since you had a drink?" The post Alice Cooper reveals the one rockstar who calls him by his birthname appeared first on NME.

"Rock’n’roll is outside looking in right now, and that gives us that outlaw attitude" The post Alice Cooper hits back at Gene Simmons’ claim that “rock is dead”: “Kids are learning hard rock right now” appeared first on NME | Music, Film, TV, Gaming & Pop Culture News.

Alice Cooper on Marilyn Manson abuse claims: “I never noticed that streak in him”

Our Love Will Change the World

A Paranormal Evening at the Olympia Paris

The Sound of A

Peter And The Wolf In Hollywood

Theatre of Death (Live at Hammersmith 2009)

Along Came A Spider

A Fistful Of Alice

Only My Heart Talkin'

Raise Your Fist And Yell

Welcome to My Nightmare

Love It to Death