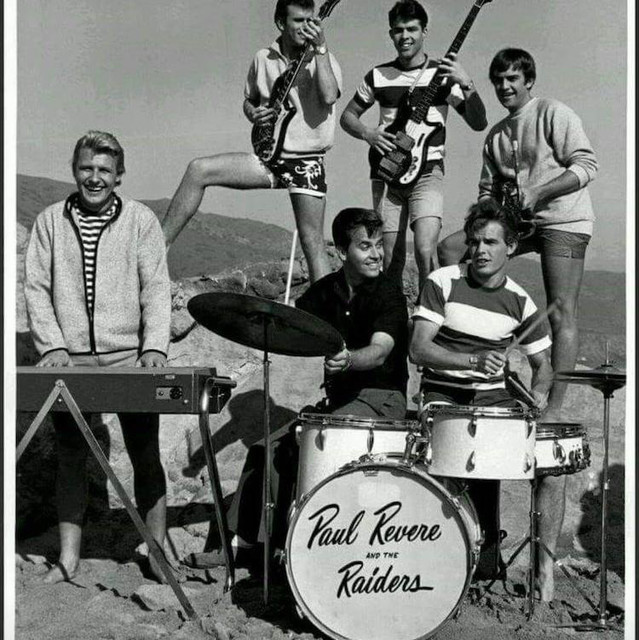 Paul Revere & the Raiders (also known as Raiders) were an American rock band formed in Boise, Idaho in 1958. They saw considerable U.S. mainstream success in the second half of the 1960s and early 1970s, with music veering from garage rock to psychedelic pop, but their early sound combined fast-paced, guitar-and-vocal-dominated rock and roll with an intimidating R&B flavor. The band was known for including Revolutionary War-style clothes in their attire.

Originally an instrumental rock combo called the Downbeats, the Raiders were formed in 1958 by organist Paul Revere, and included singer Mark Lindsay. After charting in 1961 with the minor hit "Like, Long Hair" and then in late 1963 just missing Billboard's Hot 100 with a cover of "Louie Louie", the band was signed to Columbia Records, under the tutelage of producer Terry Melcher. In January 1966 the single "Just Like Me"—propelled by exposure on Dick Clark's shows such as Where The Action Is—reached no. 11 on the Hot 100, followed by the consecutive Top Tens "Kicks" and "Hungry", thus establishing the band as national stars. Clark's TV shows showcased Lindsay as a teen idol and Revere as the "madman" of the group, and between 1966 and '69 they reached the top 30 with 12 hits. Bolstered by the success of the singles, the three 1966 albums Just Like Us, Midnight Ride and The Spirit of '67 all were gold-certified by the RIAA.

Mark Lindsay replaced Terry Melcher as the Raiders' producer, and the band scored with the 1969 US no. 20 hit "Let Me" and its parent LP Alias Pink Puzz, Lindsay embarked on a solo career while still a member of the group, charting with two 1970 top 30 singles including the Top Ten hit "Arizona". From early 1970 the band were credited as simply Raiders.In 1971 the hugely successful cover of the song "Indian Reservation (The Lament of the Cherokee Reservation Indian)" provided the Raiders with a comeback, reaching number one in both the US and Canada; the single was certified platinum in 1996. But their failure to repeat the record's success led to the band being dropped by Columbia in 1975, when Lindsay opted out. In 1976, following Paul Revere's retirement from the music industry, the Raiders broke up.

Revere's retirement was short-lived. In 1978 he went back to live performances with a show that mixed comedy and rock and roll. In 2014 Revere died of cancer, and the band's name was changed to Paul Revere's Raiders.

The garage rock revival and grunge movements—and individual acts such as the Paisley Underground—have cited the Raiders as an influence. In 2004 "Kicks" ranked no. 400 on Rolling Stone's list of The 500 Greatest Songs of All Time. Paul Revere & the Raiders and their manager Roger Hart were inducted into the Oregon Music Hall of Fame on 13 October 2007. In 2010 the band was inducted into the Hit Parade Hall of Fame. Quentin Tarantino's 2019 film Once Upon a Time...in Hollywood, set in 1969, featured three of the band's hit singles—"Hungry" (1966), "Good Thing" (1966) and "Mr. Sun, Mr. Moon" (1969)—and the 1968 B-side "Theme From It's Happening".

Paul Revere and the Raiders - Best of... (Re-Recordings)

The Essential Paul Revere & The Raiders

The Legend Of Paul Revere

A Christmas Present...And Past

Sam The Sham & The Pharaohs