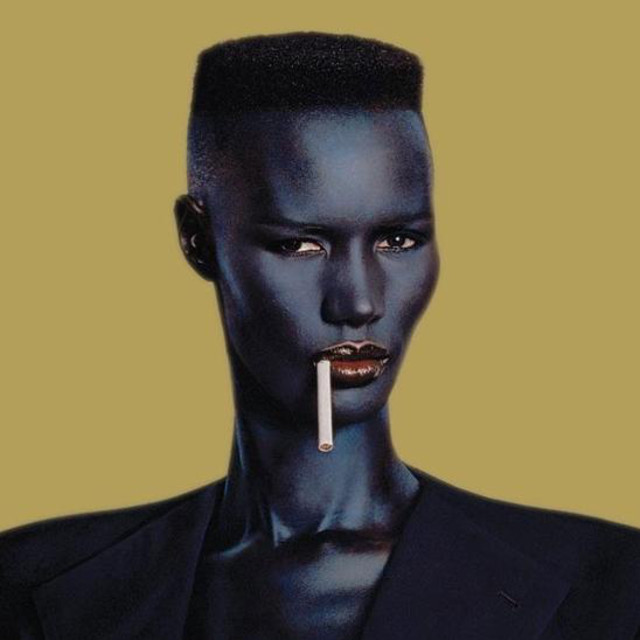 Grace Beverly Jones (born 19 May 1948) is a Jamaican model, singer and actress. In 1999, she ranked 82nd on VH1's 100 Greatest Women of Rock and Roll, and in 2008, she was honored with a Q Idol Award. Jones influenced the cross-dressing movement of the 1980s and has been an inspiration for artists including Annie Lennox, Lady Gaga, Rihanna, Solange, Lorde, Róisín Murphy, Brazilian Girls, Nile Rodgers, Santigold, and Basement Jaxx. In 2016, Billboard magazine ranked her as the 40th greatest dance club artist of all time.Born in Jamaica, she and her family moved to Syracuse, New York, when she was 13. Jones began her modelling career in New York state, then in Paris, working for fashion houses such as Yves St. Laurent and Kenzo, and appearing on the covers of Elle and Vogue. She worked with photographers such as Jean-Paul Goude, Helmut Newton, Guy Bourdin, and Hans Feurer, and became known for her distinctive androgynous appearance and bold features.

Beginning in 1977, Jones embarked on a music career, securing a record deal with Island Records and initially becoming a star of New York City's Studio 54-centered disco scene. In the early 1980s, she moved toward a new wave style that drew on reggae, funk, post-punk, and pop music, frequently collaborating with both the graphic designer Jean-Paul Goude and the musical duo Sly & Robbie. Her most popular albums include Warm Leatherette (1980), Nightclubbing (1981), and Slave to the Rhythm (1985). She scored Top 40 entries on the UK Singles Chart with "Pull Up to the Bumper", "I've Seen That Face Before", "Private Life", and "Slave to the Rhythm". In 1982, she released the music video collection A One Man Show, directed by Goude.

Jones appeared in some low-budget films in the US during the 1970s and early 1980s. In 1984, she made her first mainstream appearance as Zula in the fantasy-action film Conan the Destroyer alongside Arnold Schwarzenegger and Sarah Douglas, and subsequently appeared in the 1985 James Bond movie A View to a Kill as May Day. In 1986, she played a vampire in Vamp, and acted in and contributed a song to the 1992 Eddie Murphy film Boomerang. She appeared alongside Tim Curry in the 2001 film Wolf Girl. For her work in Conan the Destroyer, A View to a Kill, and Vamp, she was nominated for Saturn Awards for Best Supporting Actress.

Are you a slave to the 'Sunday Lunch' rhythm? The post Watch Toyah Willcox and Robert Fripp cover Grace Jones’ ‘Slave To The Rhythm’ appeared first on NME.

Here’s all the free events at Grace Jones’ Meltdown Festival

The slate includes a roller disco workshop, takeover from No Signal radio, soundclash celebrating the music of Jones' native Jamaica and more The post Here’s all the free events at Grace Jones’ Meltdown Festival appeared first on NME.

Rob Da Bank is being sued for £650,000 over unpaid Bestival loan

The event was last held in 2018 with London Grammar, M.I.A and Grace Jones appearing The post Rob Da Bank is being sued for £650,000 over unpaid Bestival loan appeared first on NME.

Skunk Anansie on Grace Jones’ Meltdown: “She said ‘If you don’t do it, I’m going to break your neck!’”

Skin talks to NME about being supported by Nova Twins, politics in 2022, and new music The post Skunk Anansie on Grace Jones’ Meltdown: “She said ‘If you don’t do it, I’m going to break your neck!’” appeared first on NME.

Over a career that spanned six decades, the daring couturier dressed the likes of Grace Jones, Beyoncé, Lady Gaga, and Celine Dion and lent his name to the phenomenally successful Angel perfume.

Robbie Shakespeare, one half of Sly and Robbie, has died, aged 68

Hailed as one of the most influential bassists of all time, the Jamaican reggae musician also performed on songs by Bob Dylan, Grace Jones, and Mick Jagger

Including her career-defining 1981 album ‘Nightclubbing’ The post Grace Jones album covers missing on streaming platforms due to rights issue appeared first on NME.

The Jean-Paul Goude–made covers for Nightclubbing, Living My Life, Slave to the Rhythm, and Island Life have been replaced by dichromatic covers featuring squares and plain text

Solange, Peaches, Baaba Maal, and Jones herself remain on the London fest’s bill

Evilmainya (Taken from the Movie "freddie")

Slave To The Rhythm

Flash and the Pan