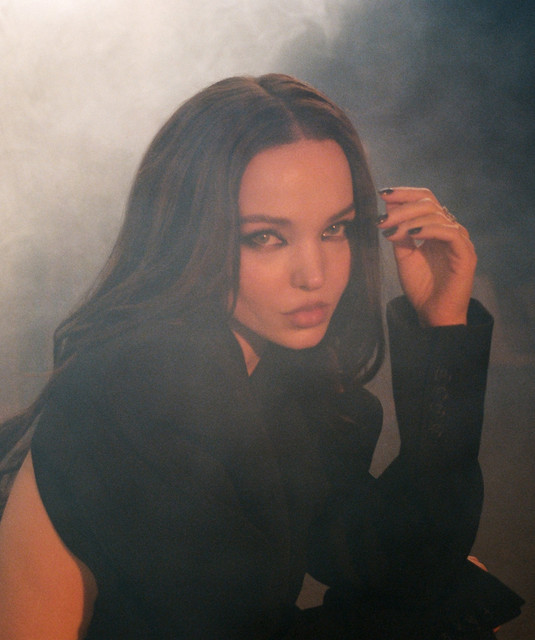 Dove Olivia Cameron (born Chloe Celeste Hosterman; January 15, 1996) is an American singer and actress. She played a dual role as the eponymous characters in the Disney Channel comedy series Liv and Maddie, for which she won the Daytime Emmy Award for Outstanding Performer in Children's Programming. She has also portrayed Mal in the Descendants film series. Cameron further starred in the comedy thriller Vengeance (2022).

In 2016, Cameron starred in the NBC live television musical Hairspray Live!, which earned her a nomination for Best Musical Moment at the 2017 MTV Movie & TV Awards, for her performance of "You Can't Stop the Beat". On stage, from 2018 to 2019, she played the role of Cher Horowitz in an off-Broadway rendition of the 1995 film Clueless, and in 2019, she debuted on the London stage with her portrayal of Clara Johnson in the musical The Light in the Piazza.

As a singer, Cameron made her debut with the soundtrack album to Liv and Maddie (2015). In the same year, she released her debut single, "If Only", for Descendants. Her debut musical release, Bloodshot / Waste, was released in 2019. In 2022, she released the single "Boyfriend", which became her first solo song to chart on the Billboard Hot 100, and peaked in the top 20.

Dove Cameron is one of Hollywood's most exciting multi-hyphenates, with a new single called "Breakfast" out now and a starring role in the film Vengeance on the

10 Cool New Pop Songs to Get You Through The Week: Aespa, Dove Cameron, Dayglow & More

From Dembow to Opera, Meet Six of Music’s Queer Game-Changers

"I've been covering mirrors lately," the "Boyfriend" singer wrote. "I've been feeling wrong in clothing that used to make me feel beautiful lately."

Dove Cameron spoke with Billboard’s Tetris Kelly on the red carpet of the 2022 Billboard Music Awards.

The song is also Cameron's first top 10 on the Pop Airplay chart.

"I couldn't tear myself away from how creative people were getting," she says of watching it blow up on TikTok.

Here Are the Lyrics to Dove Cameron’s ‘Boyfriend’

Follow along with the lyrics to Dove Cameron's TikTok viral hit.

Is the Next Big Hit 15 Seconds Long?

For artists like Dove Cameron and David Kushner, a new strategy called the "evergreen pre-save" is upending traditional ideas about how to build a fan base — and what even constitutes a song

Trending Up: For Radio, Old Taylor Is the New Taylor — Plus Dove Cameron, Tame Impala & More

Plus the newly viral "Playboy" rapper Jx.Zero, and a Super Bowl LVI halftime-appropriate flashback to 20 years ago.

These 10 tracks from artists like Dove Cameron, Bree Runway, Anthony Ramos and CHAI will get you energized to take on the week.

Stronger (From "Under the Sea: A Descendants Short Story")

Better Together (From "Descendants: Wicked World")

Rather Be With You (From "Descendants: Wicked World")

Genie in a Bottle