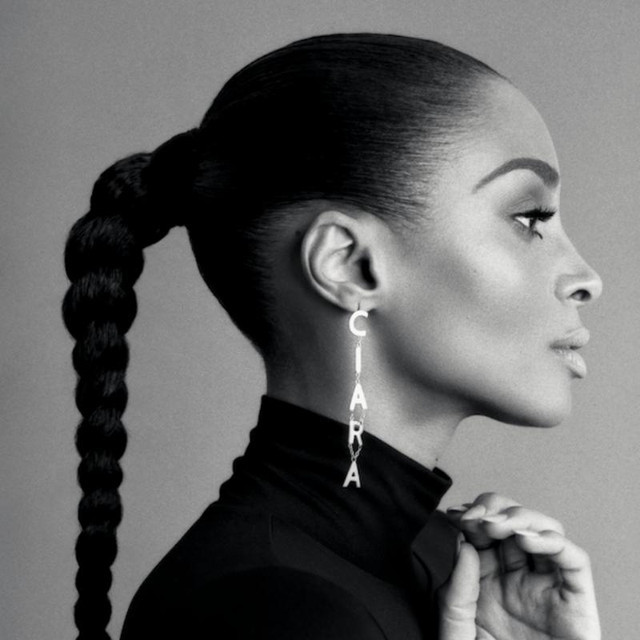 Ciara Princess Wilson ( see-AIR-ə; née Harris, born October 25, 1985) is an American singer. Born in Fort Hood, Texas, her family eventually settled in Atlanta, Georgia, where she joined the girl group Hearsay. She later signed a publishing deal and befriended producer Jazze Pha, who recorded demos that would appear on her debut album. With his help, Ciara signed a record deal with LaFace Records.

In 2004, Ciara released her debut studio album, Goodies, which spawned four singles: "Goodies" (featuring Petey Pablo), "1, 2 Step" (featuring Missy Elliott), "Oh" (featuring Ludacris) and "And I". "Goodies" topped the Billboard Hot 100, and also topped the charts in the United Kingdom, while "1, 2 Step" and "Oh" both peaked at two on the Hot 100 and charted within the top five in the UK. The album was certified triple platinum by the Recording Industry Association of America (RIAA) and garnered two nominations at the 48th Annual Grammy Awards. Ciara was also featured on Missy Elliott's "Lose Control" and Bow Wow's "Like You", both of which reached number three on the Billboard Hot 100. In 2006, Ciara released her second studio album, Ciara: The Evolution, which spawned the hit singles "Get Up" (featuring Chamillionaire), "Promise", "Like a Boy" and "Can't Leave 'em Alone" (featuring 50 Cent). The album reached number one in the U.S. and was certified platinum.

Ciara's third studio album, Fantasy Ride (2009) was less successful than her first two albums. However, it produced the international top-ten single "Love Sex Magic" (featuring Justin Timberlake), which received a Grammy Award nomination for Best Pop Collaboration with Vocals. The following year, Ciara released her fourth studio album Basic Instinct, which included the R&B top-five single "Ride" (featuring Ludacris), but was met with low sales, continuing a downward trend in her commercial performance. Ciara signed a new record deal with Epic Records in 2011. In 2013, she released her fifth studio album, Ciara, which spawned the R&B top-ten single "Body Party". Her sixth album, Jackie (2015), included the singles "I Bet" and "Dance like We're Making Love". Her seventh album, Beauty Marks (2019), included the hit single "Level Up". Ciara's awards include three BET Awards, three MTV Video Music Awards, three MOBO Awards, and one Grammy Award. As of 2019, Ciara's worldwide sales total over 45 million.In 2006, Ciara made her film debut in All You've Got, and later appeared in the films Mama, I Want to Sing! (2012) and That's My Boy (2012). In 2013, she had a recurring role in the US TV series, The Game. In 2016, Ciara signed a signed a modeling contract with IMG. That year, she became a Global Brand Ambassador for the cosmetics giant Revlon, and she married quarterback Russell Wilson.

Ciara took to social media to share a video of her and husband Russell Wilson, along with a heartfelt message celebrating their six years of marriage.

"Doing life with you has been everything I’ve hoped for, dreamt of, and more," the singer wrote.

The label deal will be in partnership with the R&B star’s Beauty Marks Entertainment imprint.

The writer-producer duo's biggest hits include “Caught Up” by Usher, “Yo (Excuse Me Miss)” by Chris Brown and “Oh” by Ciara.

Ciara Wishes a Happy 8th Birthday to Her Son Future: ‘Mommy Loves You So Much’

"It warms my heart to see how you love so beautifully," Ciara wrote of her eldest son on his birthday Thursday (May 19).

The furry surprise was a gift to the singer for Mother's Day.

Former Miami Dolphins linebacker Channing Crowder is facing backlash after he said he doesn’t understand why Ciara would “leave Future” for Russell Wilson.

Russell Wilson Asks Ciara for ‘More Babies’ on ‘Ellen’: ‘Just Give Me One More At Least’

Ciara's guest hosted an episode of 'The Ellen DeGeneres Show.'

Highlights from the Ciara-hosted event.

Billboard’s Chelsea Briggs spoke with Ciara on the red carpet of Women in Music about her love for Missy Elliot, going viral on TikTok and husband NFL quarterback Russell Wilson makes an appearance.

Ciara & Her Son ‘Roll’ in Style With Matching Bronco Trucks

Ciara took mother-son matching to the next level when she shared an adorable video to Instagram showing off their matching rides.

Billboard‘s 2022 Women in Music Awards are returning to Los Angeles. This year’s event, hosted by Ciara, will take place March 2 at the YouTube Theater at L.A.’s Hollywood Park and for the first time ever, tickets to attend the Women in Music Awards will be available to the public. Tickets will go on sale […]

"You're somebody that I've looked up to forever," Normani told Ciara.

The singer wears only an orange sarong as she balances a bottle of rum on her head.

Seacrest, the show's 17-time host and executive producer, will headline the New Year's festivities from Times Square in New York City for its 50th anniversary.

Entertainment world reacts to Ahmaud Arbery verdict: “The pendulum of justice swung in the right direction”

He was seen crawling on the carpet of the White House press room.

For Halloween 2021, Ciara paid tribute to the late Selena Quintanilla.

Ciara celebrated turning 36 on Monday (Oct. 25), and husband Russell Wilson publicly wished the love of his life a happy birthday on Instagram.

Ciara took fans for a ride with her latest TikTok clip featuring a dance to Normani's 'Wild Side' for Russell Wilson.

Ciara Celebrates Mother’s Day by Revisiting ‘I Got You,’ Featuring Baby Future

Ahead of Mother's Day on Sunday, Ciara plays one of her own songs dedicated to all the moms and reflects on all the "sentimental" and generational feelings surrounding it.

Olivia created a special playlist for Billboard featuring some of her favorite divas, including Doja Cat, Janelle Monáe, Jessie J, Ciara and more.

Get Up (Extended Mix)

Get Up EP (feat. Chamillionaire)

DVD Bonus Audio (from Goodies. The Videos and More!)