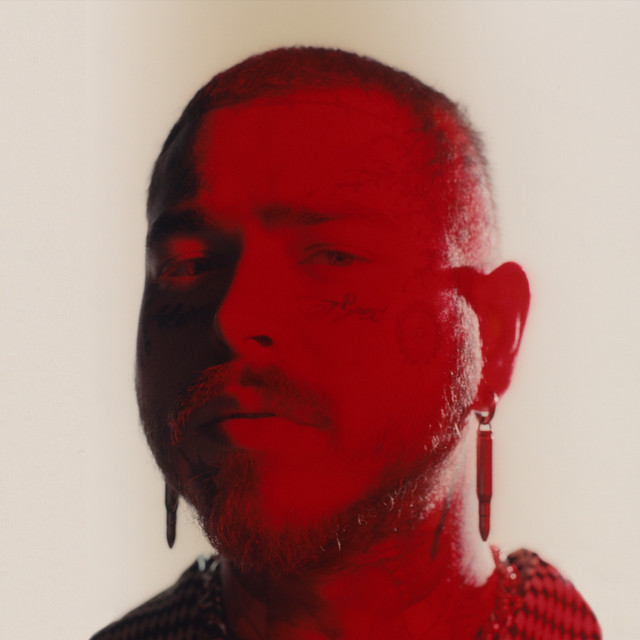 Austin Richard Post (born July 4, 1995), known professionally as Post Malone, is an American rapper, singer, and songwriter. Known for his variegated vocal styles, Malone has gained acclaim for blending genres and subgenres of hip hop, pop, R&B, and trap. His stage name was derived from inputting his birth name into a rap name generator.Malone began his music career in 2011 and gained recognition with his 2015 debut single "White Iverson", which peaked at number 14 on the US Billboard Hot 100. Malone signed a recording contract with Republic Records and released his debut studio album Stoney (2016); it contained the diamond single "Congratulations" and set the record for most weeks (77) on the US Billboard Top R&B/Hip-Hop Albums chart. Malone's second album, Beerbongs & Bentleys (2018), debuted at number one on the US Billboard 200 and set several streaming records. It also contained the Hot 100 number-one singles "Rockstar" and "Psycho" and was nominated for Album of the Year at the 2018 Grammy Awards.

His third number one, "Sunflower" (with Swae Lee), was the promotional and lead single to the soundtrack for the film Spider-Man: Into the Spider-Verse (2018), and was included on Malone's third album, Hollywood's Bleeding (2019); the album was his second number one. Its second single, "Circles", reached number one and set the record for most weeks (39) in the top ten on the Hot 100. His fourth album, Twelve Carat Toothache, was released in June 2022.

Among the best-selling music artists with over 80 million records sold, Malone has won 10 Billboard Music Awards, three American Music Awards, one MTV Video Music Award, and has received six Grammy Award nominations. He holds several Billboard chart records: he is the first solo artist to top the Rap Airplay and Adult Contemporary charts, while "Circles" set the record for longest climb to number one (41 weeks) on the Adult Contemporary chart by a solo artist.

The superstar explains why he's eager to deliver his latest album in a "really different way."

It’ll be the first tour for both acts in 2023 The post Red Hot Chili Peppers announce 2023 Australian and New Zealand tour with Post Malone appeared first on NME.

Plus: New questions about Beyoncé and Chris Brown.

Post Malone is joining forces with his longtime manager Dre London for SKRT, a new line of hard seltzers set to launch across this country this summer.

"Rockstar" is the third of the "Circles" artist's music videos to reach the milestone.

Drugs, Bluegrass, and Bass Fishing: How Billy Strings Outran His Past and Infiltrated the Mainstream

The guitar hotshot is selling out storied venues like the Ryman Auditorium, hanging with Post Malone, and turning on the masses to a bold new kind of bluegrass

We're recapping the outcomes of last week's questions and the artists -- Drake, Post Malone & Kendrick Lamar -- in this week's predictions.

The new dates include stops in Toronto, Boston, New York and Los Angeles.

"I wouldn’t say it’s a hideaway as much as it’s an oasis" The post Post Malone admits 60 per cent of his lyrics are written on the toilet appeared first on NME.

Post Malone Reveals He Writes Most of His Lyrics on the Toilet: 'It's My Special Zone'

Posty shared the information during his debut appearance on 'The Howard Stern Show': "Sh*t literally comes to me because I write all my songs on the can."

"It's important to me because I loved Kurt so much" The post Post Malone asked Frances Bean Cobain’s permission to do Nirvana livestream appeared first on NME.

The new arrival maintains his perfect streak of No. 1s on the genre's albums chart.

Malone said the song reminds him of his brother, who "introduced me to Pearl Jam in a big fucking way" The post Watch Post Malone’s emotional cover of Pearl Jam’s ‘Better Man’ on ‘Howard Stern’ appeared first on NME.

Singer said the track reminds him of his brother Jordan, who's a Marine. "I’ve just been thinking about that a lot lately," he said

Post Malone's first album of the 2020s debuts with a strong showing -- albeit not as strong as some previous efforts.

"By the time I open that third pack I’m like, 'I’m a total piece of shit and I need to go to sleep'" The post Post Malone shares his record for most cigarettes smoked in a day appeared first on NME.

SEVENTEEN Lands Third No. 1 on Top Album Sales Chart With ‘Face the Sun’

Plus: New albums from Post Malone, Prince and The Revolution, and Angel Olsen debut in the top 10.

The rapper's 'Cooped Up' collaborator Roddy Ricch will perform at many of the shows The post Post Malone announces 2022 North American tour appeared first on NME.

Fleet Foxes first appeared on a Billboard chart in April 2008 when their second EP 'Sun Giant' debuted on Heatseekers Albums.

"I want to let her make her own decisions," Malone said of keeping his newborn daughter's life private.

Bad Bunny Back At No. 1, Post Malone & SEVENTEEN Make The Top 10 on the Billboard 200 | Billboard News

Bad Bunny and Post Malone beat out Harry Styles’ ‘Harry’s House’ for the No. 1 and No 2 spots, respectively.

Post Malone Announces Birth of His and Fiancée's First Child Together

During an interview with Howard Stern, Post Malone confirmed the birth of his first child, as well as announced that he is now engaged to be married.

“I love touring and I love meeting my fans and singing these songs with them," the rapper previously told Billboard of hitting the road.

Only Wanna Be With You (Pokémon 25 Version)