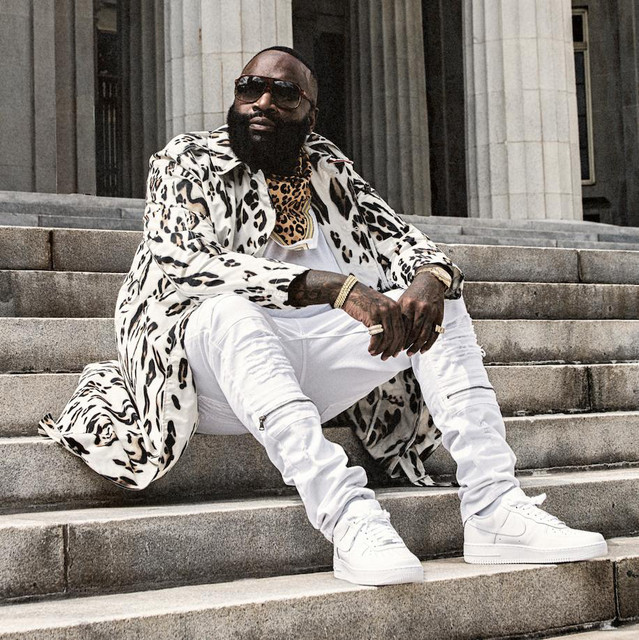 William Leonard Roberts II (born January 28, 1976), known professionally as Rick Ross, is an American rapper.Prior to releasing his debut single, "Hustlin'", in 2006, Ross was the subject of a bidding war, receiving offers from Diddy's Bad Boy Entertainment and Irv Gotti's Murder Inc., until signing a multimillion-dollar deal with Jay-Z on Def Jam Recordings. Ross released his debut album Port of Miami through the label later that year, debuting at the top spot on the U.S. Billboard 200 album chart, with sales of 187,000 units during the first week. Ross released his second studio album, Trilla, in 2008, once again debuting atop the Billboard 200.Outside of his solo career, Ross was a lead member of the hip hop group Triple C's, alongside fellow Florida rappers Gunplay and Torch, in 2005. Ross founded the record label Maybach Music Group in 2009, on which he released his studio albums Deeper Than Rap (2009), Teflon Don (2010), God Forgives, I Don't (2012), Mastermind, Hood Billionaire (2014), Black Market (2015), and Rather You Than Me (2017). His tenth album, Port of Miami 2, was released in August 2019 and peaked at number 2 on the Billboard 200 charts. Prominent industry acts have also been signed to Rick Ross through the Maybach Music label, including Meek Mill, Wale, and French Montana, among others. In early 2012, MTV named Ross as the Hottest MC in the Game.

Rick Ross Questions DJ Khaled About How Almond Milk Is Made, Says He’s Afraid of It

Rick Ross and DJ Khaled square off in the first episode of 'GQ Hype Debate' with the former asking the latter about the origins of almond milk.

In an appearance on 'The RapCaviar Podcast,' legendary producer No I.D. revealed J. Cole passed on beats that later went to Nas, Big Sean, and Rick Ross.

John Legend talks to our Deputy Director of Hip-Hop and RnB, Carl Lamarre about his new album ‘Legend’, working with Jay-Z and Rick Ross, as well as his complicated relationship with Kanye West, and more!

Rick Ross and Red Bull Symphonic have announced a special concert at the Atlanta Symphony Hall that will see the rapper perform with Orchestra Noir.

Five Mississippi-based Wingstop locations owned by Rick Ross and his family have been fined by the Department of Labor’s Wage and Hour Division.

After making waves in South Florida, rising rapper Trapland Pat has tapped Rick Ross for the remix of his 2021 viral hit “Big Business,” complete with a video.

"I pulled the homie to the side and told him you know, who I was, the Biggest Bawse. And for one of the first times in a long time that didn’t get me in" The post Rick Ross says he wasn’t allowed into Buckingham Palace appeared first on NME.

Who is the funniest rapper on the internet right now? We ranked the top 15 funny rappers, from Doja Cat to Tyler, the Creator to Cardi B to Rick Ross .

Rick Ross gets candid about his apparent disinterest in orally stimulating the anus, stating the oft-praised experience "ain't a Rozay thing."

Gillie dissed Rozay during a recent podcast interview with Southside: "These old n***as, they don’t hear the roar of the crowd no more," Gillie said.

Gillie da Kid Rips ‘Goofy’ Rick Ross After Being Called a Fraud: ‘Why the F*ck Would You Buy a Cow, N***a?’

Gillie da Kid took a moment on 'Million Dollaz Worth of Game' to issue a response to Rick Ross and clown him for his Instagram video about buying a cow.

Rick Ross Criticizes Those Who Think 'Begging' Will Help Them

Rozay shared his thoughts in a recent Instagram video that received mixed responses, one of which came from his previous collaborator Waka Flocka.

The MMG boss hosted the inaugural event on his 235-acre property Saturday. He also showcased some standout cars from his own personal collection.

On Saturday, May 14, rising Atlanta rapper Lil Keed died at the age of 24. He was signed to Young Thug‘s Young Stoner Life Records.

After unexpectedly walking off set during his '85 South Comedy Show' interview in December, Rick Ross shared an explanation on the 'Breakfast Club.'

The Maybach Music Group boss unveiled the vehicle via Instagram on Thursday, just weeks before his inaugural Car and Bike Show in Fayetteville, Georgia.

Los Angeles rapper and singer Blxst has dropped his latest project 'Before You Go,' which sees him further expand upon his blend of hip-hop and R&B.

Freddie Gibbs on Taking Responsibility for Feuding With Artists: ‘It Is Me and I Don't Give a F*ck’

Fresh off the release of his Rick Ross collab "Ice Cream," Freddie Gibbs has offered a succinct but memorable response to speculation about his feuds.

Richer Than I Ever Been (Deluxe)

Richer Than I Ever Been

Can You Hear Me Now?

No Bark When I Bite (feat. Rick Ross & Cruel Youth)

All You Got (feat Rick Ross)

Rather You Than Me

I Love My Bitches