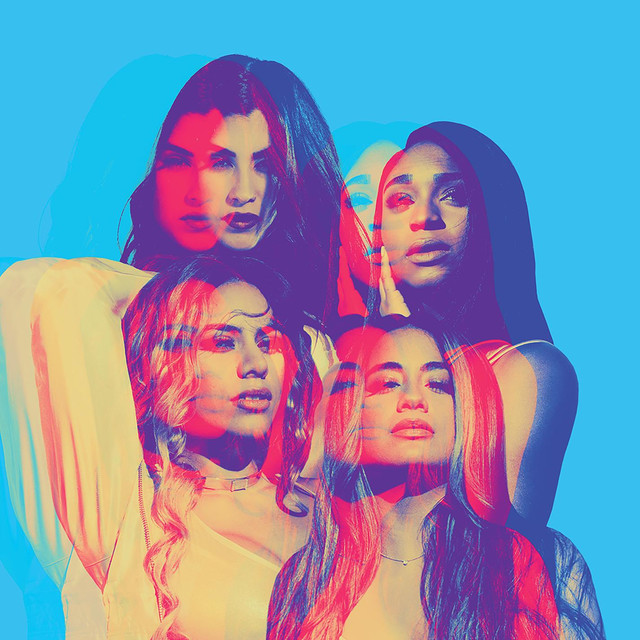 Fifth Harmony, often shortened to 5H, are an American girl group based in Miami, composed of Ally Brooke, Normani, Dinah Jane, Lauren Jauregui, and previously Camila Cabello until her departure from the group in December 2016. The group signed a joint record deal with Simon Cowell's label Syco Records and L.A. Reid's label Epic Records after forming and finishing third in the second season of the American singing competition series The X Factor in 2012.

The group released their debut single "Miss Movin' On", preceding their extended play Better Together. In 2015, The group released their debut studio album Reflection, which was certified gold by the Recording Industry Association of America (RIAA). It spawned the singles "Boss", "Sledgehammer" and "Worth It"; with the latter single being certified 3x

Platinum by RIAA, and reaching the top ten in thirteen countries. In 2016, the group released "Work from Home", the lead single from their second album 7/27, peaked at number four on the Billboard Hot 100, making it the first top five single by a girl group in a decade on that chart. They released their self-titled third album in 2017. The group went on indefinite hiatus in March 2018, allowing its members to pursue solo projects.Fifth Harmony has sold nearly 15 million RIAA certified units, and are one of the best-selling girl groups of all time with a reported 33 million copies sold. They are known for their vocal range and songs with themes of female empowerment, self positivity, confidence, and unity. As of 2016, they have earned 1.6 billion on-demand streams, according to Nielsen SoundScan. Billboard named them the biggest girl group of the 2010s. In 2017, Time referred to them as arguably "the biggest girl group in the world". Fifth Harmony have earned the most top ten albums on the U.S. Billboard 200 for any girl group in the 21st century. Their accolades include an American Music Award, three MTV Europe Music Awards, three Guinness World Records, four MTV Video Music Awards, four iHeartRadio Music Awards, the first ever Billboard Women in Music Group of the Year award, a record five Nickelodeon Kids' Choice Awards (the most for a girl group), and ten Teen Choice Awards.

The singer's cheeky TikTok had Harmonizers scrambling in the comments.

"The gratitude that I have for each one of these women and the experience of being part of something so special sticks with me to this day," wrote Lauren Jauregui

The former Fifth Harmony member jumped on a duet version of the song after meeting the Belgian musician at the 2022 Met Gala.

Lauren Jauregui Thanks Fans for the Love on Fifth Harmony’s 10th Anniversary: ‘You All Are Magic’

"I’m so grateful for my past, present and future," Jauregui tweeted.

Boys World Shakes Ass, Brings Sass, and Heals From a Bad Romance on ‘So What’

With Little Mix on hiatus and Fifth Harmony long gone, this girl group is on the ascent to becoming pop's next big thing

On the 10th anniversary of their formation, we honor the best moments from one of modern pop's greatest girl groups

"thank you angel. ily so much," responded Normani, who is up for a trio of awards thanks to her steamy "Wild Side" collab with Cardi B.

Girl groups have given us hit after hit for decades from Spice Girls to Destiny’s Child to Fifth Harmony. From anthems, memorable moments, and iconic solo stars, girl groups are the gift that keeps on giving. But where did they begin? What makes a girl group? This is Billboard Explains: The Evolution Of Girl Groups.

Lauren Jauregui is standing up for her "dedicated" fanbase after a viral tweet that criticized "stan culture."

"I don’t blame the girls for how it went down, down,” the Cuban-Mexican artist sings in the second verse

“I don’t blame the girls for how it went down,” she sings on the track.

She also opened up about the challenges she’s faced in making a name for herself outside of Fifth Harmony The post Normani says her debut solo album is “almost done” appeared first on NME.

The second solo single from the Fifth Harmony singer

On the first episode of her new podcast The Ally Brooke Show, Ally Brooke opens up about the mental and verbal "abuse" she allegedly suffered while in Fifth Harmony.

I'm In Love With a Monster

All I Want for Christmas Is You

Better Together (The Remixes)