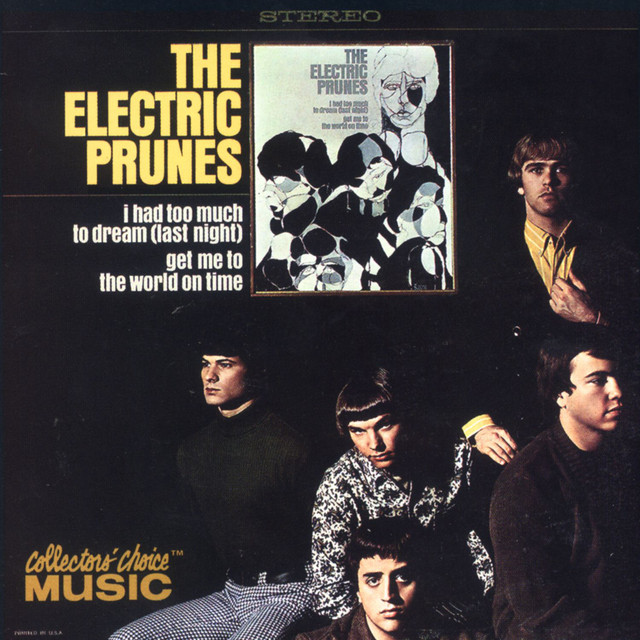 The Electric Prunes are an American psychedelic rock band, formed in Los Angeles, California, in 1965. Much of the band's music was, as music historian Richie Unterberger described it, possessed of "an eerie and sometimes anguished ambiance." It mainly consisted of material by songwriters Annette Tucker and Nancie Mantz, though the group also penned their own songs. Incorporating psychedelia and elements of embryonic electronic rock, the band's sound was marked by innovative recording techniques with fuzz-toned guitars and oscillating sound effects. In addition, guitarist Ken Williams' and singer James Lowe's concept of "free-form garage music" provided the band with a richer sonic palette and exploratory lyrical structure than many of their contemporaries.The band was signed to Reprise Records in 1966 and released their first single, "Ain't It Hard", in the latter part of the year. Their first album, The Electric Prunes, included the band's two nationally charting songs, "I Had Too Much to Dream (Last Night)" and "Get Me to the World on Time". With the appearance of their second album, Underground, the band was more free to create their own material. However, the original group disbanded by 1968 when they proved unable to record the innovative and complex arrangements by David Axelrod on the albums Mass in F Minor and Release of an Oath. Both albums were released under the band's name, the rights to which were owned by their record producer David Hassinger, but were largely performed by other musicians. Several of the original band members reconvened in 1999 and began recording again. The band still performs occasionally, although the only remaining original member is lead singer James Lowe.

Release Of An Oath

I Had Too Much To Dream (Last Night)