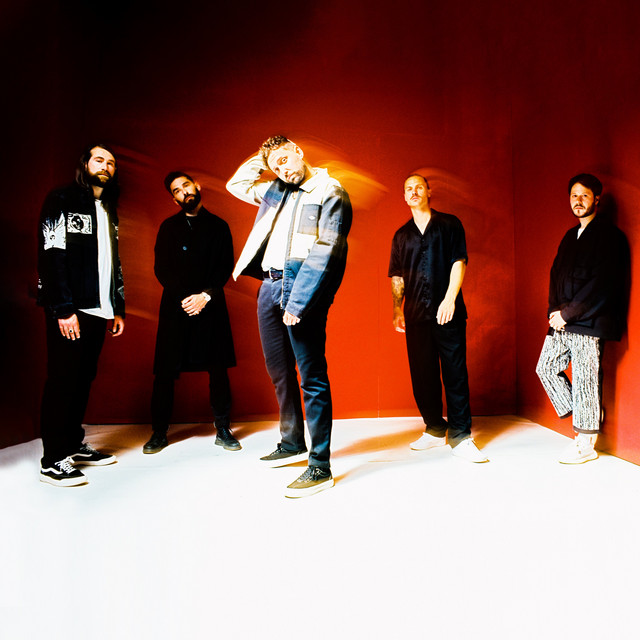 You Me at Six are an English rock band from Weybridge, Surrey. The band consists of lead singer Josh Franceschi, guitarists Max Helyer and Chris Miller, bassist Matt Barnes and drummer Daniel Flint. Formed in 2004, the name for the group originated as an abbreviation for the group making Friday night plans after a concert. The band has released seven studio albums and one live album.

The group achieved initial success in 2008 with the release of their debut album, Take Off Your Colours, which included the singles "Save It for the Bedroom", "Finders Keepers" and "Kiss and Tell", with the latter two peaking at number 33 and number 42 respectively in the UK Singles Chart. Their second album Hold Me Down (2010) debuted at number five in the UK, while third album Sinners Never Sleep (2011) peaked at number 3, was certified Gold, and spawned the band's fifth top 50 single "Loverboy". Their fourth album Cavalier Youth( 2014) debuted at number one and featured the singles Lived a Lie and Room to Breathe. Fifth album Night People released to mixed reviews in 2017. Their next album VI released in 2018 followed by their seventh studio album SUKAPUNCH which gave the band their second number one album in March 2021.You Me at Six has toured extensively, with appearances on Warped Tour, Soundwave, and has toured with Thirty Seconds to Mars, Paramore, Fall Out Boy and All Time Low. You Me at Six won the award for Best British Band at the Kerrang! Awards in 2011. The band's influences include American rock bands Blink-182, Incubus, Thrice and Arctic Monkeys.

You Me At Six announce 2023 UK headline tour

Waterparks will open for the group at the gigs The post You Me At Six announce 2023 UK headline tour appeared first on NME.

You Me At Six announce new single, ‘Deep Cuts’

The song arrives later this week The post You Me At Six announce new single, ‘Deep Cuts’ appeared first on NME.

2000trees Festival add You Me At Six, Nova Twins and many more to their 2022 line-up

The Cheltenham music festival will take place in July The post 2000trees Festival add You Me At Six, Nova Twins and many more to their 2022 line-up appeared first on NME.

The track appears on a soon-to-be-released deluxe edition of last year's 'It'll All Make Sense In The End' The post James Arthur links up with You Me At Six’s Josh Franceschi for new single ‘Lose My Mind’ appeared first on NME.

The footage in the official video was captured back in September The post Watch You Me At Six and Oli Sykes perform ‘Bite My Tongue’ in new live video appeared first on NME.

The band's third album is set to be released on vinyl for the first time The post You Me At Six announce ‘Sinners Never Sleep’ anniversary shows and special edition reissue appeared first on NME.

Our House (The Mess We Made)

Pray for Me (Alexis Troy Remix)

Take on the World (AlunaGeorge Remix)

Take on the World (New Version)

The Final Night Of Sin At Wembley Arena

No One Does It Better

Liquid Confidence (Nothing To Lose)