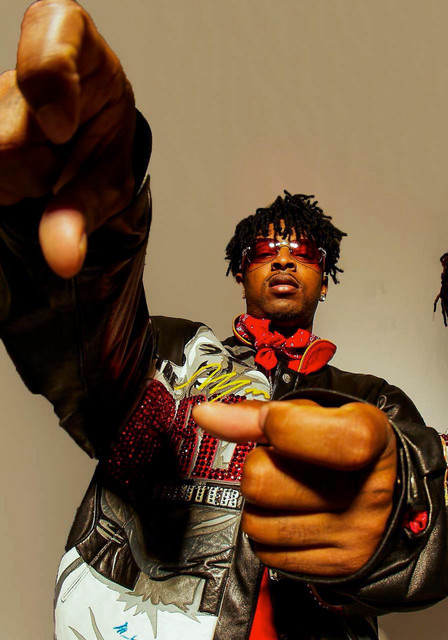 Shéyaa Bin Abraham-Joseph (born October 22, 1992), known professionally as 21 Savage, is a rapper based in Atlanta, Georgia, United States. Born in London, he moved to Atlanta with his mother at age seven. He became known after releasing two mixtapes in 2015, before attaining international attention with the release of the collaborative EP Savage Mode (2016) with Metro Boomin; its singles "X" (featuring Future) and "No Heart" peaked within the top 40 on the Billboard Hot 100 and 21 Savage's profile also later increased with a guest feature on Drake's 2016 single "Sneakin'". He then signed a recording contract with Epic Records in January 2017.21 Savage's debut studio album, Issa Album (2017), peaked at number two on the U.S. Billboard 200 and its lead single "Bank Account" reached number 12 on the Hot 100. He then released the collaborative album Without Warning (2017) with Offset and Metro Boomin, with the song "Ric Flair Drip" peaking at number 13 on the Hot 100, though that particular song did not feature him. 21 Savage featured on Post Malone's 2017 single "Rockstar", which reached number one on the Hot 100 and nominated for Record of the Year and Best Rap/Sung Performance at the 2019 Grammy Awards. His second album, I Am > I Was (2018), became his first U.S. number one album and spawned the hit song "A Lot" (featuring J. Cole), which won Best Rap Song at the 2020 Grammy Awards. 21 Savage's highly anticipated third album, Savage Mode II (2020), a sequel collaboration with Metro Boomin to their 2016 EP, debuted atop the Billboard 200, and spawned the U.S. top 10 singles "Runnin" and "Mr. Right Now" (featuring Drake). In 2022, 21 Savage would be featured on Drake's song "Jimmy Cooks" from his album Honestly, Nevermind, where it debuted at number one on the Hot 100, making it 21 Savage's second number one on the chart and his first number-one debut.21 Savage was arrested by U.S. Immigration and Customs Enforcement (ICE) on February 3, 2019. Officials revealed his status as a British citizen who entered the U.S. in July 2005 and unlawfully overstayed a H-4 visa that expired in 2006. He was granted bond on February 12 and released the next day, pending the outcome of an expedited deportation hearing, which was initially scheduled for April 9, but was later postponed indefinitely, with 21 Savage's lawyers stating he was legally residing in the U.S. for several years prior to the 2005 H-4 visa.

The Houston rapper is listed as a cowriter on the joint album's opener "Rich Flex," which uses an interpolation of her hit 2020 track "Savage."

All the People Drake Disrespected on 'Her Loss'— And Their Responses

Drake's new album with 21 Savage has caused a stir on social media, as it seemingly includes references to Megan Thee Stallion, Ye, Ice Spice, and more.

First Impressions of Drake and 21 Savage's New Album 'Her Loss'

From Selena Gomez to Drake & 21 Savage, What’s Your Favorite New Release of the Week? Vote!

Plus new singles by P!nk and Lindsay Lohan!

Megan herself previously addressed the lyrics in a series of tweets following the release of Drake and 21 Savage's new joint album 'Her Loss.'

Drake and 21 Savage have linked up to deliver their new joint album 'Her Loss,' featuring a 16-song tracklist from the two frequent collaborators.

The 16-track offering arrived after a week of creative self-promotion from the dynamic duo.

For Their New Album, Drake and 21 Savage Took Over The Media

The rollout for the duo's latest release, 'Her Loss,' spoofed 'Vogue' covers and Howard Stern interviews. Turns out, it was all the promo they needed

The Canadian rap star appeared to give Howard Stern a little more than he bargained for when he and 21 Savage sat for a chat with the SiriusXM jock.

Drake, 21 Savage, Megan Thee Stallion, and More Back Call to ‘Protect Black Art,' Ban Use of Rap Lyrics in Court

The initiative began as a petition earlier this year and was launched in response to the YSL indictment in which Young Thug and Gunna were named.

A Boogie Wit da Hoodie will not be releasing his new album 'Me vs. Myself' on Friday as initially planned, and it's all Drake and 21 Savage's fault.

With Drake and 21 Savage’s new collaborative album 'Her Loss' on the way this week, the two have released a promo magazine to coincide with its release.

Due to producer Noah “40” Shebib getting COVID, the project will now arrive Nov. 4 instead of its planned Friday release.

The rappers' collaborative album will now be released on November 4, a week later than planned The post Drake and 21 Savage album ‘Her Loss’ delayed after producer Noah “40” Shebib contracts COVID appeared first on NME.

'Her Loss,' is out on Friday, October 28. We gear up for the first full project from 21 Savage and Drake by revisiting their handful of tracks together so far

The OVO rapper teased the project in his newly released "Jimmy Crooks" video. The effort, which is titled 'Her Loss,' is expected to drop very soon.

Drake, 21 Savage to Release ‘Her Loss’ Album Next Week

Drake and 21 Savage Link Up for "Jimmy Cooks" Video

Drake and 21 Savage return for another collab from the Boy's seventh studio album 'Honestly, Nevermind.' The video is for the project's last song.

The "Cash In Cash Out" rapper joined forces with RtA on a capsule consisting of jeans, shirts, and tees, with his trademark dagger being incorporated.

Drake ‘Cooks’ Up Another No. 1 on Rhythmic Airplay Chart

21 Savage and Wack 100 got into a heated exchange on Clubhouse this weekend after the latter accused the former of being an informant in YSL's RICO case.

It's unclear what, exactly, sparked 21's message. As previously reported, he was initially set to perform on Sunday at Rolling Loud New York.

21 Savage is having a strong 2022. From "Cash In Cash Out" to "Surround Sound," here is our ranking of the ATL rapper's best feature verses so far.

Three years after he was detained by ICE in 2019 for illegally living in the US, 21 Savage wants the judge to throw out evidence collected during the arrest.

One Mic, One Gun

Cash In Cash Out

Spiral: From The Book of Saw Soundtrack

NOT ALL HEROES WEAR CAPES (Deluxe)