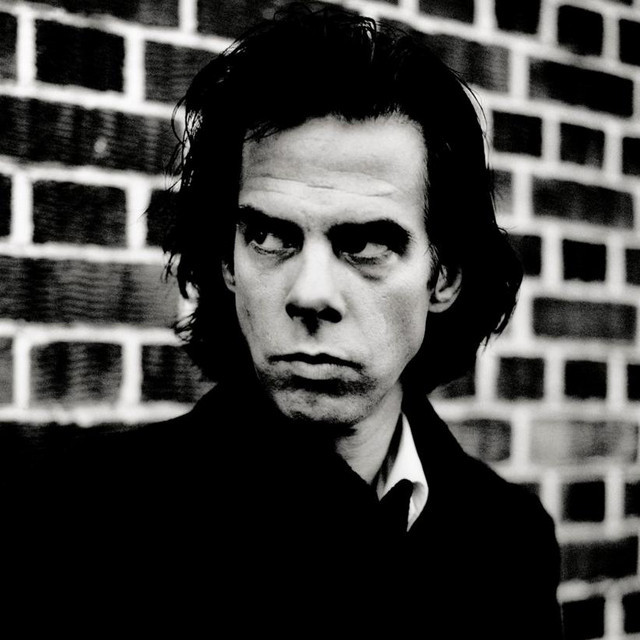 Nicholas Edward Cave (born 22 September 1957) is an Australian singer, songwriter, poet, lyricist, author, screenwriter, composer and occasional actor. Known for his baritone voice and for fronting the rock band Nick Cave and the Bad Seeds, Cave's music is generally characterised by emotional intensity, a wide variety of influences and lyrical obsessions with death, religion, love and violence.Born and raised in rural Victoria, Cave studied art in Melbourne before fronting the Birthday Party, one of the city's leading post-punk bands, in the late 1970s. They relocated to London in 1980. Disillusioned by life there, they evolved towards a darker and more challenging sound that helped inspire gothic rock and acquired a reputation as "the most violent live band in the world". Cave became recognised for his confrontational performances, his shock of black hair and pale, emaciated look. The band broke up soon after moving to Berlin in 1982, and Cave formed Nick Cave and the Bad Seeds the year after, later described as one of rock's "most redoubtable, enduring" bands. Much of their early material is set in a mythic American Deep South, drawing on spirituals and Delta blues, while Cave's preoccupation with Old Testament notions of good versus evil culminated in what has been called his signature song, "The Mercy Seat" (1988), and in his debut novel, And the Ass Saw the Angel (1989). Also in 1988, he appeared in Ghosts... of the Civil Dead, an Australian prison film which he co-wrote and scored.

The 1990s saw Cave move between São Paulo and England, and find inspiration in the New Testament. He went on to achieve mainstream success with quieter, piano-driven ballads, notably the Kylie Minogue duet "Where the Wild Roses Grow" (1996), and "Into My Arms" (1997). Turning increasingly to film in the 2000s, Cave wrote the Australian Western The Proposition (2005), composing its soundtrack with frequent collaborator Warren Ellis. The pair's film score credits include The Assassination of Jesse James by the Coward Robert Ford (2007), The Road (2009) and Lawless (2012). Their garage rock side project Grinderman has released two albums since 2006. In 2009, he released his second novel, The Death of Bunny Munro, and starred in the semi-fictional "day in the life" film 20,000 Days on Earth (2014). His more recent musical work features ambient and electronic elements, as well as increasingly abstract lyrics, informed in part by grief over his son Arthur's 2015 death, which is explored in the documentary One More Time with Feeling (2016) and the Bad Seeds' 17th and latest album, Ghosteen (2019).

Cave maintains The Red Hand Files, a newsletter he uses to respond to questions from fans. His work is the subject of academic study, and his songs have been covered by a wide range of artists, including Johnny Cash ("The Mercy Seat"), Metallica ("Loverman") and Snoop Dogg ("Red Right Hand"). He was inducted into the ARIA Hall of Fame in 2007, and named an Officer of the Order of Australia in 2017.

Bono and Mel C will also feature at events during the October festival The post Nick Cave and Jarvis Cocker announced for Cheltenham Literature Festival 2022 appeared first on NME.

The first tour of their homeland as a duo kicks off this November The post Nick Cave and Warren Ellis announce full Australian tour dates appeared first on NME.

"These people are as good as people get, and they love their son, Luca" The post Nick Cave says parents of ‘Love Island’ contestant helped him through tragedy of son’s death appeared first on NME.

The Bad Seeds multi-instrumentalist reflects on how he and Cave grew over lockdown, a process documented in the film This Much I Know to Be True, which begins streaming this week

The project will serve as "a kind of spiritual portrait of the world at this time" The post Nick Cave wants your footage for “ambitious” new ‘Seven Psalms’ film appeared first on NME.

Nick Cave: “Intolerance of opposing ideas indicates a lack of confidence in one’s own thoughts”

He answered fan questions about free speech and Jesus Christ in his latest blog post The post Nick Cave: “Intolerance of opposing ideas indicates a lack of confidence in one’s own thoughts” appeared first on NME.

The band have joined the growing line-up for the new Lisbon festival The post Nick Cave and The Bad Seeds set to headline MEO KALORAMA Festival appeared first on NME.

Cave is set to appear as an animated version of himself alongside Swedish rocker Thåström The post An animated Nick Cave to star in new TV series ‘Before They Were Gods’ appeared first on NME.

In the bizarre series, a fictionalized Cave philosophizes with the Swedish rock star Thåström

"They’re probably over there waiting for Bauhaus to begin" The post Nick Cave dedicates ‘I Need You’ to his sons at Primavera Sound appeared first on NME.

Cave lost his son Jethro just weeks ago The post Nick Cave And The Bad Seeds kick off summer tour with first show in four years appeared first on NME.

The film will come to the MUBI streaming service next month after a previous one-night-only run in cinemas The post Watch an exclusive clip of Nick Cave and Warren Ellis’ ‘This Much I Know To Be True’ featuring Marianne Faithfull appeared first on NME.

The 37 Most Anticipated Albums of Summer 2022

Spiritualized, Kae Tempest, Robert Glasper and more have been added to the line-up The post Full line-up for Nick Cave And The Bad Seeds’ All Points East show announced appeared first on NME.

The Radiohead supergroup will perform alongside Cave and co. in Victoria Park as well as Michael Kiwanuka, Sleaford Mods, Japanese Breakfast and more The post The Smile added to Nick Cave & The Bad Seeds’ All Points East show appeared first on NME.

The singer-songwriter broke his silence on his website The Red Hand Files.

"These letters are a great source of comfort and I’d like to thank all of you for your support," Cave wrote

Cave has lost two sons in the space of seven years The post Nick Cave thanks fans for their support after death of his son Jethro appeared first on NME.

Cave’s appearance marks the first time Party Dozen have featured another artist on a song The post Watch the video for Party Dozen’s Nick Cave-featuring single ‘Macca The Mutt’ appeared first on NME.

Watch the singer explain how she referenced her idols in Florence + The Machine's latest album The post Florence Welch on “trying to embody” Nick Cave and Iggy Pop on new album appeared first on NME.

The director talks to NME about new film 'This Much I Know To Be True', Cave's efforts with The Red Hand Files, his relationship with Warren Ellis, and "the voice of eternity" Marianne Faithfull The post Director Andrew Dominik says new Nick Cave film “shows what he has learned about loss” appeared first on NME.

Nick Cave Announces Death of His Son Jethro Lazenby at 30

"We would be grateful for family privacy at this time."

Cave confirmed the death of his son, although did not provide a cause of death

"We would be grateful for family privacy at this time" The post Nick Cave’s son Jethro Lazenby has died, aged 31 appeared first on NME.

The film is released in cinemas next month The post Watch new clip from Nick Cave and Warren Ellis’s upcoming documentary appeared first on NME.

Where the Wild Roses Grow

Litany of Gathering Up

Litany of The Forsaken

The Assassination of Jesse James By the Coward Robert Ford

The Story - And the Ass Saw the Angel (Reading with Music)

What A Wonderful World