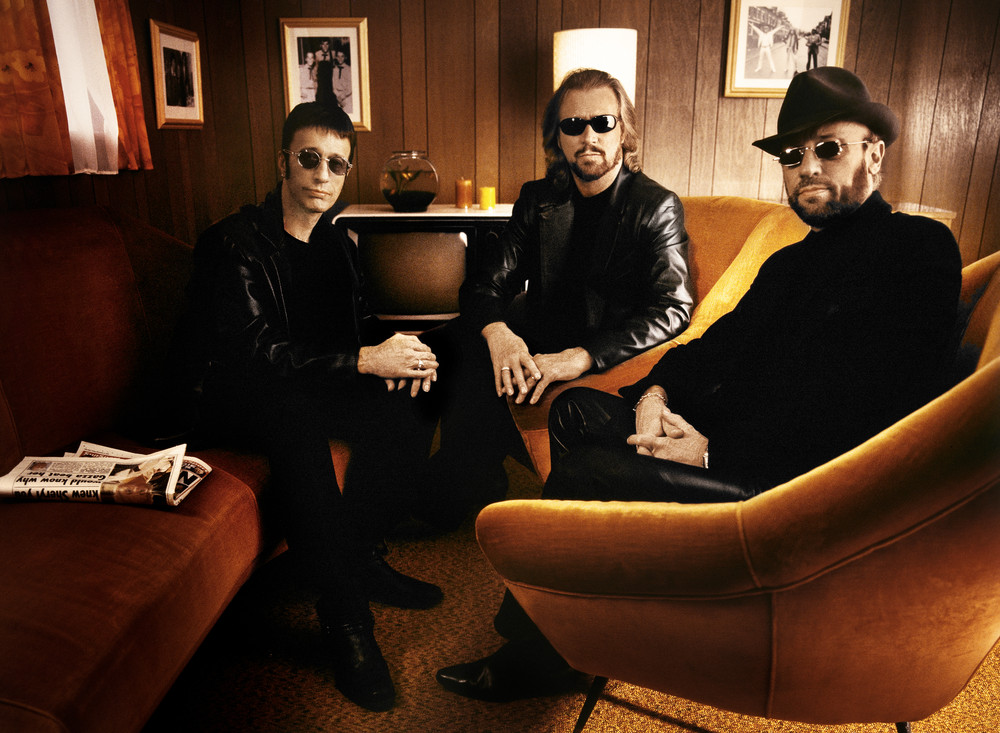 were a music group formed in 1958, featuring brothers Barry, Robin and Maurice Gibb. The trio were especially successful as a popular music act in the late 1960s and early 1970s, and later as prominent performers of the disco music era in the mid- to late 1970s. The group sang recognisable three-part tight harmonies; Robin's clear vibrato lead vocals were a hallmark of their earlier hits, while Barry's R&B falsetto became their signature sound during the mid- to late 1970s and 1980s. The Bee Gees wrote all of their own hits, as well as writing and producing several major hits for other artists and have been regarded as one of the most important and influential acts in pop music history. They have been referred to in the media as The Disco Kings, Britain's First Family of Harmony, and The Kings of Dance Music.Born on the Isle of Man to English parents, the Gibb brothers lived in Chorlton, Manchester, England until the late 1950s. There, in 1955, they formed the skiffle/rock and roll group the Rattlesnakes. The family then moved to Redcliffe, in the Moreton Bay Region, Queensland, Australia, later to Cribb Island. After achieving their first chart success in Australia as the Bee Gees with "Spicks and Specks" (their twelfth single), they returned to the UK in January 1967, when producer Robert Stigwood began promoting them to a worldwide audience. The Bee Gees' Saturday Night Fever soundtrack (1977) was the turning point of their career, with both the film and soundtrack having a cultural impact throughout the world, enhancing the disco scene's mainstream appeal. They won five Grammy Awards for Saturday Night Fever, including Album of the Year.

The Bee Gees have sold over 120 million records worldwide (with estimates as high as over 225 million records sold worldwide), making them among the best-selling music artists of all time. They were inducted into the Rock and Roll Hall of Fame in 1997; the Hall's citation says, "Only Elvis Presley, the Beatles, Michael Jackson, Garth Brooks and Paul McCartney have outsold the Bee Gees." With nine number-one hits on the Billboard Hot 100, the Bee Gees are the third-most successful band in Billboard charts history behind only the Beatles and the Supremes.Following Maurice's sudden death in January 2003 at the age of 53, Barry and Robin retired the group's name after 45 years of activity. In 2009, Robin announced that he and Barry had agreed that the Bee Gees would re-form and perform again. Robin died in May 2012, aged 62, after a prolonged period of failing health, leaving Barry as the only surviving member of the group.

Single will appear on DJ Khaled's next album, God Did

The Bee Gees man is the fourth artist after David Bowie, Elton John and Paul McCartney to feature The post Barry Gibb’s legacy is being celebrated with new Royal Mail stamp collection appeared first on NME.

Grammy Contenders 2022: Dave Grohl on Returning to the Stage and Why Covering the Bee Gees Is the Foos’ Peak So Far

Beverly Noga, Former Publicist for Sonny & Cher and the Bee Gees, Dies at 87

Beverly Noga, a music publicist who helped guide the careers of such artists as Sonny & Cher, Cream, the Bee Gees and The Chambers Brothers, died Friday of cancer at her home in Los Angeles, a family spokesperson said. She was 87.

"You shouldn’t be hating. You should be dancing," Dave Grohl says during latest salvo against hate group

The Foo Fighters kicked off their summer tour in Cincinnati on Wednesday night (July 28) by christening the new Icon Music Center with a two-plus hour show of classics and Bee Gees covers.

Catch the Dee Gees in full disco flow The post Watch Foo Fighters’ disco video for their cover of the Bee Gees’ ‘You Should Be Dancing’ appeared first on NME.

The latest preview of her upcoming album 'Different Kinds Of Light’ The post Listen to Jade Bird’s new Bee Gees-inspired single ‘Now Is The Time’ appeared first on NME.

The band's Madison Square Garden gig was the first full-capacity arena show in New York since the start of the pandemic - and it included a special Bee Gees cover The post Here’s what went down at Foo Fighters’ huge, fully vaccinated New York show appeared first on NME.

"I have never, ever in my life sung like that," says Dave Grohl The post Hear Foo Fighters cover The Bee Gees’ disco classic ‘You Should Be Dancing’ appeared first on NME | Music, Film, TV, Gaming & Pop Culture News.

'Greenfields' features the music of the Bee Gees reimagined by Barry Gibb, with artists ranging from Dolly Parton and Keith Urban to Little Big Town, Brandi Carlile and Miranda Lambert.

Barry Gibb is taking Bee Gees fans on a country journey with new album, Greenfields, and it includes a remake of the group's tune "Words" with Dolly Parton.

Bee Gees bound on Billboard's dance/electronic charts (dated Dec. 26) following the Saturday, Dec. 12, premiere of the HBO documentary The Bee Gees: How Can You Mend a Broken Heart.

Released by the Bee Gees in 1970, this version appears on Gibb's upcoming album 'Greenfields'

HBO's The Bee Gees: How Can You Mend a Broken Heart debuts this week

The Bee Gees’ Barry Gibb on New HBO Documentary and His Brothers: ‘It Became a Competition’

HBO will premiere the Bee Gees Doc on Dec. 12.

The Bee Gees’ Barry Gibb on New HBO Documentary and His Brothers: ‘It Became a Competition’

HBO will premiere the Bee Gees Doc on Dec. 12.

One of today’s most gifted songwriters talks to the Bee Gees legend about lyrics and the joy of making music with family: "I’ve known your songs my whole life"

How Can You Mend A Broken Heart

This Is Where I Came In

Children Of The World

Life In A Tin Can

To Whom It May Concern