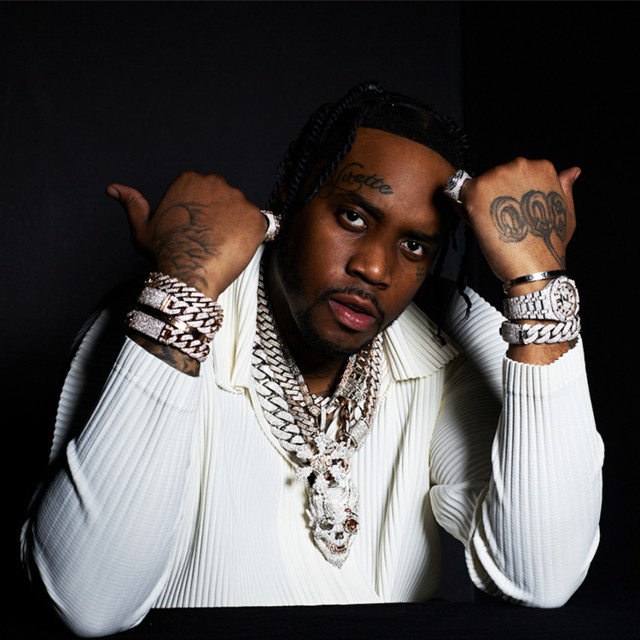 Maxie Lee Ryles III (born March 29, 1990), known by his stage name Fivio Foreign, is an American rapper from New York. He rose to fame in 2019 with his single "Big Drip", which spawned a remix with rappers Lil Baby and Quavo. He is signed to fellow New York rapper Mase's RichFish Records and Columbia Records.In May 2020, Ryles was featured on Drake's song "Demons", which charted at 34 on the Billboard Hot 100, earning him his first Billboard-charting single. Later that month, he collaborated with Lil Tjay and Pop Smoke on the song "Zoo York", which peaked at 65 on the Hot 100. In August 2021, he reached further recognition through his feature on Kanye West's single "Off the Grid", from West's tenth studio album Donda, which peaked at number 11 on the Hot 100. Fivio Foreign's debut album B.I.B.L.E. was released on April 8, 2022.

Mase appeared on the 'Million Dollaz Worth of Game' podcast to clear the air regarding Fivio Foreign's claim that his deal included a $5,000 advance.

Fivio Foreign Says He Received $5,000 Advance After Signing Deal With Mase: 'I Don't Really Be Complaining'

While on the 'Million Dollaz Worth of Game' podcast, Fivio said he was given a $5,000 advance after inking a deal with Mase: "That sh*t ain't last two weeks."

Despite being sentenced to two years in prison for possession of a weapon last year, Sheff G returns with his latest full-length offering, 'From The Can.'

The 17-track project was released via Epic Records on Friday and marks Rowdy's debut studio album, complete with features from French Montana and more.

The pair have been teasing it since May The post The Kid LAROI and Fivio Foreign join forces for new single ‘Paris To Tokyo’ appeared first on NME.

The track arrives three months after Fivio released his debut album, 'B.I.B.L.E.' It's unclear if the new cut will land on the project's deluxe edition.

The long-awaited project delivers 24 tracks, including the previously released "Iffy," "WE (Warm Embrace)," and the Wizkid-assisted "Call Me Every Day."

The Bronx drill star shared the track, produced by A Lau and Elvis Beatz, on Friday. It arrives months after the release of the Cardi B-assisted "Shake It."

During a performance, Coi Leray gave a fan a lap dance while performing Fivio Foreign's "What's My Name," but kicked him off the stage when he touched her butt.

Brooklyn Drill Has Never Been Hotter. Can It Rise Above the Violence?

Fresh off enlisting Gunna for a remix to his single “To the Moon," JNR Choi has tapped Fivio Foreign, G Herbo, M24, and Russ Millions for a new version.

The ongoing feud between 6ix9ine and Fivio Foreign continued on Wednesday, with Tekashi sending more shots at the Brooklyn drill rapper on social media.

Nicki Minaj and Fivio Foreign paid tribute to their hometown in the video for their viral "We Go Up" collaboration.

Nicki Minaj has released the new music video for her impressive Fivio Foreign collaboration "We Go Up." It's directed by Andre “DreVinci” Jones.

6ix9ine has been going after Fivio Foreign surrounding the release of his debut album 'B.I.B.L.E.,' and the New York drill MC has responded.

Fivio Foreign wants to elevate Brooklyn drill with his debut album 'B.I.B.L.E.,' and he’s eyeing something even bigger than the ‘King of New York’ throne.

Not In The Mood (feat. Fivio Foreign & Kay Flock)

My head is spinning like a screw (Моя голова винтом)