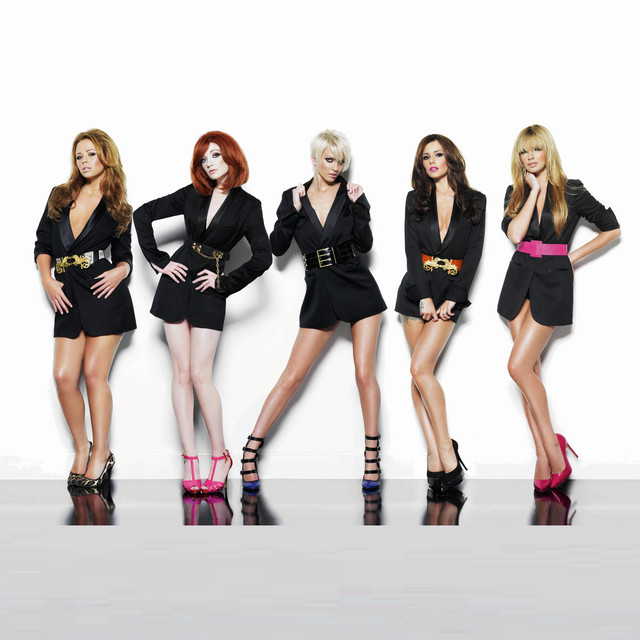 Girls Aloud was an English-Irish pop girl group that was created through the ITV talent show Popstars: The Rivals in 2002. The group comprised singers Cheryl, Nadine Coyle, Sarah Harding, Nicola Roberts and Kimberley Walsh. The group achieved a string of twenty consecutive top ten singles in the United Kingdom, including four number ones. They also achieved seven certified albums, of which two reached number one. They have been nominated for five Brit Awards, winning the 2009 Best Single for "The Promise".

The group's musical style is pop, but they had experimented with electropop and dance-pop throughout their career. Girls Aloud's collaborations with Brian Higgins and his songwriting and production team Xenomania earned the group critical acclaim, due to an innovative approach to mainstream pop music. The group became one of the few UK reality television acts to achieve continued success, amassing a fortune of £30 million by May 2010. Guinness World Records lists them as the "Most Successful Reality TV Group" in the 2007 edition. They also hold the record for "Most Consecutive Top Ten Entries in the UK by a Female Group" in the 2008 edition, and are credited again for "Most Successful Reality TV Group" in the 2011 edition. The group was also named the United Kingdom's biggest selling girl group of the 21st century, with over 4.3 million singles sales and 4 million albums sold in the UK alone. The group disbanded in March 2013 following the conclusion of the Ten: The Hits Tour.

Sales and streams of Girls Aloud's music surged in the U.K. following the untimely death of founding member Sarah Harding.

New research will in part focus on those who have no family history of the disease The post Late Girls Aloud singer Sarah Harding helps fund breast cancer research for women in their 30s appeared first on NME.

The band had been reported to be gearing up for a 20th anniversary tour before Harding's illness The post Sarah Harding had reportedly ‘signed up’ for Girls Aloud reunion tour before her death appeared first on NME.

Watch Cheryl reunite with Nicola Roberts at The Mighty Hoopla

The former Girls Aloud bandmates performed an energetic rendition of 'Fight For This Love' The post Watch Cheryl reunite with Nicola Roberts at The Mighty Hoopla appeared first on NME.

"She showed a legion of pop producers that you can do anything and it's not a trash genre" The post Girls Aloud producer remembers Sarah Harding: “Indie bands loved her” appeared first on NME.

The five-piece, consisting of Harding, Kimberley Walsh, Nadine Coyle, Nicola Roberts and Cheryl Cole, was a pop juggernaut through the noughts, collecting four Official Chart U.K. No. 1s singles and 21 Top 10s. Twenty of those Top 10s were consecutive.

"I can’t think of words that could possibly express how I feel about this girl & what she means to me" The post Girls Aloud’s Nadine Coyle shares tribute to Sarah Harding: “I am absolutely devastated” appeared first on NME.

Producer Pete Waterman pays tribute to Sarah Harding: “She was typical of what it was all about – excitement, just real enthusiasm”

Waterman was a judge on 'Popstars: The Rivals', the talent show on which Girls Aloud formed The post Producer Pete Waterman pays tribute to Sarah Harding: “She was typical of what it was all about – excitement, just real enthusiasm” appeared first on NME.

Singer Sarah Harding of the British pop group Girls Aloud has died after a battle with breast cancer, her mother said Sunday. She was 39.

Singer Sarah Harding of the British pop group Girls Aloud has died after a battle with breast cancer, her mother said Sunday. She was 39.

The Sound Of Girls Aloud

What Will The Neighbours Say?

Sound Of The Underground